It’s hard to imagine under what circumstances mental illness could be thought to be hilarious, but that certainly seems to be the intent of the makers of Shira Piven’s Welcome to Me, a coruscating look at a desperate woman struggling to come to terms with her life assisted by a multi-million dollar windfall that allows her carte blanche to do as she pleases. Whether one considers this a black comedy or a dramedy, it’s really neither funny nor particularly interesting to see the overwrought efforts of this very disturbed young woman as the film meanders through a haphazard amount of content designed to make us both laugh and cringe at the same time. 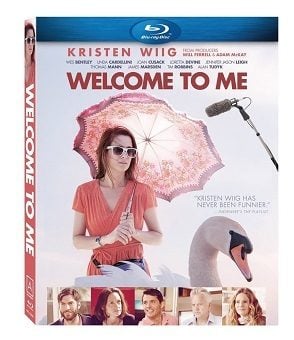 Alice Klieg (Kristen Wiig) is afflicted with borderline personality disorder and has gone off her meds when she wins $86 million in the California lottery. Even surrounded by a loving support group including best friend Gina (Linda Cardellini), gay ex-husband Ted (Alan Tudyk), and her therapist Dr. Daryl Moffet (Tim Robbins), Alice goes her own way deciding to use her money to finance one hundred episodes of a two-hour cable access talk show called “Welcome to Me” in which she presents and examines all the things of interest to her including reenactments of childhood traumas, cooking segments featuring a concentration on unusual protein dishes, and spaying and neutering animals. As long as Alice pays the bills, her producer Rich Ruskin (James Marsden) and the production team (Wes Bentley, Joan Cusack, Jennifer Jason Leigh) are happy to give her what she wants, but Alice’s lack of medication leads her toward a dangerous downward emotional spiral that she might never recover from unless someone takes control.

It’s hard to know how much humor writer Eliot Laurence actually finds in the story of Alice Klieg since all evidence points to its being a view of a pathetic woman grappling with situations and emotions over which she has little to no control. As she blows through her many millions of dollars – money that could have provided her with the dedicated and concentrated help she obviously needs if her “friends” were really intent on helping her cope with her demons – one watches in distress as these absurd programs are supposed to represent something avant-garde that catches some of the public’s fancy and actually develops something of a cult following. But is it to commiserate with her or laugh at her increasing state of lunacy? Director Shira Piven assembles a mélange of her programs on every conceivable topic (most of them absurd), but aborted sexual relationships with her executive producer Gabe Ruskin (Wes Bentley) and a college student (Thomas Mann) doing a thesis on her program get short shrift, emotional connections which might have been worth exploring if the intent of the filmmakers was on anything other than showing the woman’s completely self-centered focus on her interests and traumas.

Kristen Wiig proves herself to be a completely fearless performer playing Alice’s many psychotic episodes in freewheeling fashion and taking on-camera risks few actresses would attempt (including going full frontal nude during a stroll through a casino lobby). It’s a bold, brave performance free from ego over her appearance, but it’s also just not funny ever (if that was even the intent). One’s heart goes out to the character for her mental disorder (which Wiig without question captures brilliantly), but if this is black comedy, it’s too black obliterating even the slightest chance for amusement or charm. It’s to the actress’s credit, however, that she’s drawn to surround her an amazing cast of actors, all of whom play their roles with requisite skill and aplomb but none of whom get sizable moments in which to shine or to add any sense of comedy to the proceedings either (with the very slight possible exception of Joan Cusack whose dry, droll way with a line could bring mirth to even the most dismal event).

The film is framed at 1.78:1 for this release and is presented in 1080p using the AVC codec. Sharpness is usually excellent with just an occasional soft shot, seemingly due to inaccurate focus pulling. Color is deep and strong with believable flesh tones if a tad on the brown side. Contrast has been consistently applied, and black levels are just fine. The movie has been divided into 12 chapters.

The Dolby TrueHD 5.1 sound mix tends to stress the front channels to the detriment of the rears. Dialogue has been expertly recorded and has been placed in the center channel. The music score by David Robbins gets more of a spread through the soundstage than the sound effects do even in the wacky television episodes which often go wrong and would have made for great opportunities for split effects in all available channels.

The vast array of talent both before and behind the camera (Will Ferrell and Adam McKay are among the producers) comes pretty much to naught in Welcome to Me, a poignant but unfunny examination into the life of a millionaire suffering from dissociative personality disorder. The Blu-ray release offers great picture and sound, but fans of the cast will have to decide if this is a journey they wish to take with them.