The Spy Who Came in from the Cold Blu-ray Review

When Martin Ritt’s The Spy Who Came in from the Cold was released at the end of 1965, America was awash with spies and secret agents. Between the worldwide furor over James Bond and TV’s The Man from U.N.C.L.E., Secret Agent, I Spy, and Get Smart, spies and espionage tales were everywhere. Ritt’s film, of course, eschewed the fun, glamour, and razzle-dazzle of those other variations on the secret agent mantra. Based on John Le Carré’s best seller, The Spy Who Came in from the Cold was stark, decidedly unchic, and mournfully solemn. Not a hit in its day, the film's reputation has grown over the decades as its sad story of agents used and tossed away like so much Kleenex now rings so grimly true. 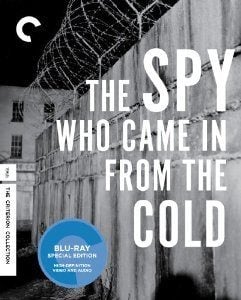 A middle-aged British spy (Richard Burton) who is tired and on the verge of retirement is given one last assignment to infiltrate East Germany and uncover information about a former colleague (Peter Van Eyck) suspected of having become a Communist traitor. Along the way of the carefully orchestrated path to East Germany, he happens to fall in love with a naïve young librarian (Claire Bloom), an attachment that’s not wise for operatives who spend their lives as mostly shadows in singular isolation. And, as he (and we) eventually come to realize, the game afoot is not exactly what it appears to be.

The screenplay by Paul Dehn and Guy Trosper stays remarkably faithful to the original Le Carré book, though early scenes thrust the audience immediately into situations that may be initially bewildering for some. Additional other pacing problems are also present in the early going before director Martin Ritt gets the central story underway and gets character relationships established and more involved. By the time things become clear and we feel we know the caper at hand, a series of twists rocks us back in our seats giving the movie a wonderful aura of surprise which we can share with some of the characters in the scenes. Ritt stages the tribunal sequence quite well, never allowing its testimony and examinations to become too cerebral or confusing and keeping a nice mix of close-ups and medium shots alternating with one another. There is a seaside walk and talk between Burton and German agent Fiedler (played by Oskar Werner) that’s straightforwardly shot and hauntingly beautiful. And that climactic dash to freedom makes for a chilling denouement, abetted by the terse instructions before it happens and the screams of sirens and the frightening crack of gunfire in its midst.

Richard Burton’s world-weary loner awakened by love but committed to a difficult mission is one of his finest, most controlled film performances. His stooped, hazily alcoholic demeanor, shambling slowly through his assigned stops along the way to his ultimate end, is a beautifully realized character paired nicely with Claire Bloom’s sweetly innocent and lovely Nan. Oskar Werner steals all of his scenes as the firecracker operative eager to replace his superior while George Voskovec expertly grills the witnesses mercilessly but with welcome restraint during the tribunal. Sam Wanamaker, Cyril Cusak, and Michael Horden all play agents of varying skills with expert precision. Only Peter Van Eyck as number one German spy Mundt seems underwhelming and somewhat over parted.

The film is presented here in a 1.66:1 aspect ratio and is offered in 1080p resolution using the AVC codec. There is pleasing sharpness consistently maintained in the transfer though some close-ups of the stars have been diffused a bit. The grayscale is nicely rendered even if black levels aren’t always as deep as in the reference transfers of other monochrome films, and contrast is usually dialed in perfectly. Age-related artifacts like scratches and dirt seen in previous releases of this film on DVD are now a memory. The film has been divided into 13 chapters.

The PCM 2.0 (2.3 Mbps) stereo sound mix is by far the most involving the film has ever been on home video. Sol Kaplan’s sometimes dissonant and jangling music sounds wonderfully rich and full paired with the crisp visuals and effective sound effects to keep audiences completely engaged. The dialogue has been expertly recorded and is never compromised by the music or effects tracks.

John Le Carré Interview (39:00, HD): Recorded in 2008, the original book’s author mentions memories of working with Martin Ritt and gives a candid critique of the entire film including the casting and his ideas about the misdirection of certain scenes.

The Secret Centre: John Le Carré (59:17, HD): a 2000 documentary on the life and writings of the best-selling author which finds the writer reading from some of his selected manuscripts.

Martin Ritt Interview (48:59): an audio only interview with the producer-director. In it, he discusses his career as an actor as well as a director, his interest in making humanistic films, his involvement with the infamous blacklist of the 1950s, the current lack of really involving material, and his working relationships with actors.

Audio Commentary on Selected Scenes (39:55, HD): cinematographer Oswald Morris is very candid about the various problems in the film’s production and also mentions for him the highlights of the film.

Richard Burton Interview (33:39): filmed for the BBC in 1967, critic Kenneth Tynan finds the actor talking about his films, his stage work, and his early career.

15-page Booklet: features some portraits of the leading actors as well as cast and crew lists, the chapter listing, and a celebratory essay on the director’s achievements with this film and others by critic Michael Sragow.

The Spy Who Came in from the Cold is a sad but satisfying Cold War espionage yarn about as far removed from a James Bond tale as it’s possible to be. It features wonderful performances, expert direction, and a Criterion Blu-ray package with some interesting, worthwhile bonus material. Highly recommended!

I've never seen this one, but it sounds pretty interesting and I do like spy movies. Might have to pick it up on a sale.

Nice review, Matt. I'm going to grab this one at the next Criterion sale.
You must log in or register to reply here.