Satires on the entertainment industry often straddle a razor’s edge. Too inside, and you often lose the mainstream audience while running the risk of biting the hand that feeds you. Too outside, and your film is dismissed as pure fantasy and fiction. Christopher Guest’s The Big Picture falls into the former category, a film that, much like This Is Spinal Tap, polarized those who work in the industry and infuriated the studio that financed it. It is also one of Guest’s most under-appreciated films. 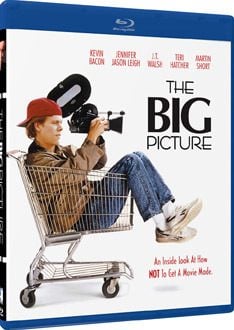 Nick Chapman (Kevin Bacon) is an award-winning student filmmaker, and at an awards banquet his final project catches the eye of studio executive Allen Habel (J.T. Walsh), who invites him to pitch his next film at his office. At the beginning of the awards ceremony, one of the presenters reads a quote from Frank Capra: “Don’t compromise, for only the valiant can create,” and in many ways, that is the theme of Christopher Guest’s The Big Picture, as Chapman learns the dangers of compromising his art in exchange for stardom, a path that leads him to riches only to have those riches taken away just as quickly. Habel wants to make a movie with Chapman, but the movie Habel envisions is not exactly the same one Chapman desires. The pitch sessions between Chapman and Habel with his yes-men associates are most likely spot-on, with some great lines thrown in, such as Chapman’s desire to shoot his film in black and white, with Habel’s response that they’ll just colorize it anyway, future studio executive Lori Pressman (Tracy Brooks Swope) agreeing by saying that most theatres only have color projectors and can’t show black and white, followed by the rest of the lemmings nodding in agreement and saying “That’s true” still has me in stitches to this day. As Chapman compromises his vision to get a greenlight from Habel, his relationship with longtime girlfriend Susan (Emily Longstreth) begins to strain, with help from Gretchen (Teri Hatcher), an actress who is only interested in Chapman in order to land a starring role in his movie. It also puts a strain on his friendship with up and coming cinematographer Emmet (Michael McKean), who lensed his student film and has been trying to get accepted into the union for years, only to find that Chapman has hired a more respected cinematographer instead. Essentially, the would-be success goes to Chapman’s head, leaving all of his friends behind, and begins to live well beyond his means by renting an apartment and leasing a Porsche with a built-in cell phone.

But that all comes crashing down around him when Habel is suddenly fired from the studio, and all of Habel’s projects are cancelled by new studio chief Pressman. Now penniless, Chapman finds himself going from dead end job to dead end job, working as a telemarketer, then a courier, and turning in his Porsche for a used AMC Gremlin. Humbled by the experience, he meets up with a former fellow film student, Lydia (Jennifer Jason Leigh), who introduces him to her next door neighbors, a local band in search of a name and a music video. Chapman agrees to make the video for free, and they manage to get it on the air on Friday Night Videos, where it catches the eye of Habel’s assistant, Todd (Don Franklin). Habel has set up shop at another studio, and demands a meeting with Chapman, as do many other executives and agents in town. When Chapman is unreachable while on a weekend getaway reconciling with Susan, he becomes the most wanted man in Hollywood, and upon returning home, his agent (played hilariously by an uncredited Martin Short) presents him with a stack of offers for the choosing. Learning his lesson, Chapman tells his agent that he wants to do HIS movie, HIS way, or nothing.

The Big Picture is possibly one of the funniest and darkest satires on the movie industry, and became a victim of being too close to the truth, even if it was somewhat unintentional by the film’s screenwriters Guest, McKean, and Michael Varhol. And I say unintentional, since many of the events involving the unnamed studio in the film would later happen to Columbia Pictures, the film’s financier and distributor, after principal photography was completed. The movie was greenlit and put into production under studio head David Puttnam, only to be released under Dawn Steele, who hated the film and, according to Guest, took many of the events and the character of Lori Pressman in the film personally. For that reason, the film never got a wide theatrical release.

The transfer provided to Mill Creek appears to be the same one used on the 2002 DVD release, which is a shame. Colors are slightly washed out and muted, detail is soft and the image seems to have an abundance of video noise throughout. It’s not unwatchable by any means, but for a catalog title from Sony, it deserves better.

The Dolby Digital 2.0 stereo surround track (encoded at 256kbps) is adequate, but still a disappointment that a lossless stereo track could not be included. Dialogue is clear and consistent, with the electronic score by David Nictern and ambient sound effects spread across the front channels with some occasional bleeding to the surrounds.

As with most Mill Creek releases, this is a movie-only, barebones release. Sadly missing is the very informative audio commentary with Director Christopher Guest and Kevin Bacon from the earlier Sony DVD release.

It is unfortunate that The Big Picture has been licensed off to Mill Creek rather than Twilight Time, as the latter may have been able to pull off a better package and transfer of this rather under-appreciated and often overlooked films by director Christopher Guest. Fans of the film may be better off purchasing the older DVD release instead.

Love this film, and would have purchased it immediately if your rating on the video quality had been better. As it is, I won't buy a bluray that isn't significantly an upgrade from a DVD. I'll just keep my existing DVD.
You must log in or register to reply here.