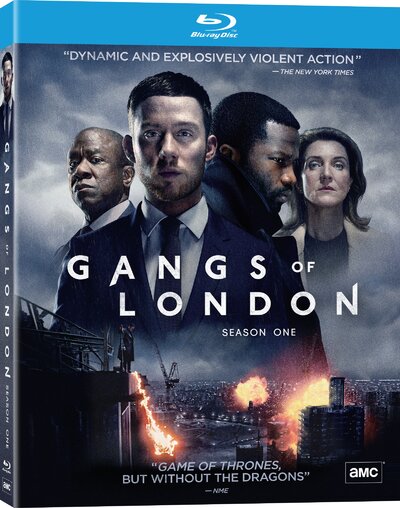 “Dynamic and Explosively Violent Action” – The New York Times
“A Saga of Criminal Intrigue” – RogerEbert.com
“Game of Thrones, but Without the Dragons” – NME

Gangs of London: Season 1 is directed by Gareth Evans (The Raid Franchise), Corrin Hardy (The Nun), and Xavier Gens (Hitman). The series stars Joe Cole (Peaky Blinders, Pure, Black Mirror), Ṣọpẹ́ Dìrísù (Humans), Colm Meaney (Star Trek, Hell on Wheels, Layer Cake), Lucian Msamati (His Dark Materials, Black Earth Rising, Kiri), Michelle Fairley (Game of Thrones, Suits) Paapa Essiedu (Press, Kiri) and Pippa Bennett-Warner (Harlots, Sick Note, MotherFatherSon). RLJE Films will release Gangs of London: Season 1 on DVD for an SRP of $34.97and Blu-ray for an SRP of $39.98.
For 20 years, Finn Wallace (Meaney) was the most powerful criminal in London. Billions of pounds flowed through his organization each year. But now he’s dead – and nobody knows who ordered the hit. With rivals everywhere, it’s up to the impulsive Sean Wallace (Cole), with the help of the Dumani family headed by Ed Dumani (Msamati), to take his father’s place. If the situation wasn’t already dangerous enough, Sean’s assumption of power causes ripples in the world of international crime. Perhaps the one man who might be able to help him and be his ally is Elliot Finch (Dìrísù), who up until now, has been one of life’s losers, a lowlife chancer with a mysterious interest in the Wallace family. But as the wind of fate blows, Elliot finds himself transported to the inner workings of the largest criminal organization in London. It doesn’t end with the Wallaces though, there are shadowy higher powers at play.

Gangs of London is created by award-winning filmmaker Gareth Evans and his creative partner Matt Flannery and is produced by Pulse Films in association with SISTER for Sky Studios. The series was executive produced by Pulse Films’ founder Thomas Benski, and Lucas Ochoa alongside Jane Featherstone for SISTER and Gabriel Silver for Sky Studios. AMC will serve as co-producer for the second season.

Bonus Features on the DVD and Blu-ray include:
· An Inside Look at The World, The Families, The Action, The Power, The Soldier
· Anatomy of an Action Scene: Pub Fight & Elliot vs Len (featuring commentary from Gareth Evans)