Passage to Marseille is an unabashed attempt by Warner Brothers to recapture the magic of 1942's Casablanca. The film does not quite pull it off, in spite of reuniting much of the latter film’s cast with its director, Michael Curtiz. Nevertheless, it remains an enjoyable film, and it is now available in a gorgeous Blu-ray edition courtesy of the Warner Archive. 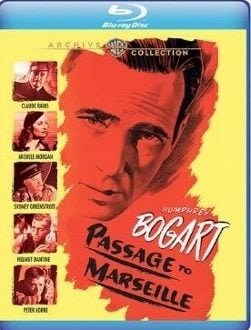 I've got to reach Marseille. I'm trying to get to a woman. I never intended to fight. - Jean Matrac

The film opens with a Free French air squadron conducting a bombing run over Germany during World War II. The gunner on one of the bombers is Jean Matrac (Humphrey Bogart), whose wife Paula (Michele Morgan) lives in occupied France with their son, whom Matrac has never seen. The French fliers are stationed at a secret air base in England, and whenever Matrac's plane returns from a successful mission it flies over the town where Paula lives and Matrac then takes the opportunity to drop a message for her.

The French officer in charge of the air base is Captain Freycinet (Claude Rains), who is visited by a journalist. The French government in Vichy is collaborating with the Germans, and members of the French resistance such as Matrac and Captain Freycinet are regarded by some as traitors. The journalist takes an interest in Matrac, and Freycinet tells the story about how they met.

When the war broke out Freycinet was stationed in New Caledonia, a French territory in the South Pacific. Upon receiving orders to return to France, he boards a ship bound for Marseille. Also on board is Major Duval (Sydney Greenstreet), a pompous officer who believes that the French army is invincible. Freycinet often finds himself at odds with Duval, but he is impressed with the ship's captain, Malo (Victor Francen). After passing through the Panama Canal, the ship comes across a small boat which contains five men who are barely alive after enduring twenty days without food and five without water. They are Matrac, Marius (Peter Lorre), Renault (Philip Dorn), Petit (George Tobias), and Garou (Helmut Dantine). They claim to be miners from Venezuela, but Major Duval suspects that they are escapees from Devil's Island, and in that regard he is correct.

In the next flashback we are taken to Devil's Island, where the story really picks up for a time until it is interrupted by another flashback. This one recounts the story of how Matrac and Paula were crusading newspaper publishers in France who severely criticized the concessions made to the Nazis at Munich. Their anti-government articles led to a mob destroying their printing presses, and Matrac was falsely accused of murder. This flashback goes on a bit long for my taste, but Passage to Marseille finally kicks into high gear when the action returns to Devil's Island.

Humphrey Bogart turns in a solid performance as the taciturn, humorless Matrac. Michele Morgan does not have the luminous screen presence of Ingrid Bergman, but she is lovely and does a fine job as Paula. Peter Lorre is excellent as the wily pickpocket Marius, and Sydney Greenstreet is perfectly cast as Major Duval, a martinet who decides to cast his lot with the Vichy collaborators when he learns that France has fallen. Michael Curtiz does a commendable job dealing with the occasionally unwieldy script.

The publicists at Warner Brothers tried to portray Passage to Marseille as another Casablanca, but that was an unrealistic expectation. Judged on its own terms, however, Passage to Marseille is flawed but entertaining. The cast is irresistible, the cinematography by the great James Wong Howe is gorgeous, and Max Steiner contributes a terrific score.

Passage to Marseille is presented in 1080p, utilizing the AVC codec, and it is properly framed at 1.37:1. The black & white image is stunning, and it seems inconceivable that the film could have looked any better when it was released in 1944. Readers are encouraged to read the rave review by our resident film restoration expert, Robert A. Harris:

A few words about...™ Passage to Marseille -- in Blu-ray

The audio is delivered in DTS-HD MA 2.0 English mono, and it is as satisfactory as anyone could want. Every word of dialogue is clear and understandable, and English SDH subtitles are available. Max Steiner's excellent score is given a very pleasing soundstage, considering the inherent limitations of the original recording.

Warner has included another delightful "Warner Night at the Movies" collection of extras. In order of presentation they are:

The Free French: Unsung Victors (a 17-minute featurette made in 2006)

Breakdowns (a 1944 collection of humorous bloopers)

Passage to Marseille is not a great film, but it is entertaining and has an outstanding cast. Warner has produced a superb Blu-ray with impeccable picture and sound, and it contains an enjoyable package of extras. The Warner Archive Blu-ray program continues to rival Sony for delivering consistently high quality high-definition films.

Readers who are interested in purchasing it can find it at the WB Shop.

Are the special features in HD and do they have uncompressed audio? Of course, I'm mostly wondering about the incredible "Jammin' The Blues".

I also want to share that, although Michele Morgan is not Bergman (who is?), her eyes are unforgettably luminous. I first saw them in her version of Marie Antoinette; then in this movie, followed by Joan of Paris; and then the great Quai des brumes. But to having first experienced those beautiful eyes in color, ah, love at first sight!

davidmatychuk said:
Are the special features in HD and do they have uncompressed audio? Of course, I'm mostly wondering about the incredible "Jammin' The Blues".
Click to expand...

The video specs for the extras are ambiguous - "Special features may not be in High Definition, Audio & subtitles may vary." "Jammin' the Blues" looks like high definition, but it could be excellent upscaling. The audio, however, is definitely DTS HD-MA 2.0.

The "Warner Night at the Movies" nudges this past maybe purchase, to must purchase for me. Thanks for the review, Richard!

Now temporarily out of stock at Amazon...glad I pre-ordered!
You must log in or register to reply here.