A crime thriller with equal parts suspense and tedium, J. Lee Thompson’s 10 to Midnight doesn’t quite have the cracking fast pacing that similar thrillers featuring Clint Eastwood of the 1980s had, and its uneasy mix of fine acting amid acres of amateurishness gives the entire enterprise an off-kilter kind of nuttiness. It’s considered a cult film now with its kinky nude slasher and a half dozen helpless women waiting like squealing little lambs ready to be slaughtered, but the central detective duo is strong, and there are some outstanding character actors in supporting roles who are certainly worth seeing even in something this erratically uneven. 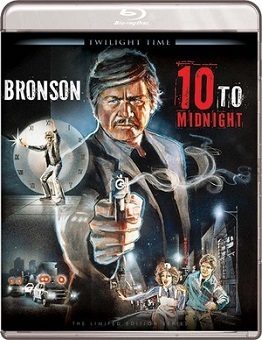 When a couple having sex in the woods is slashed to death, detectives Leo Kessler (Charles Bronson) and Paul McAnn (Andrew Stevens) are on the job searching for clues. After some preliminary investigating, the culprit pretty clearly seems to be Warren Stacy (Gene Davis), a bottled-up young man who had attempted to date the murdered young woman, but her diary reveals that she found him a creep. A couple of additional murders convince Leo that Stacy is the guy, but lacking sufficient proof for a murder conviction (the most they can hang on him is an obscene phone call), Leo decides to falsify evidence to get an arrest. Once the tainted evidence is uncovered and the case dismissed, Stacy promises to make Kessler pay for what he did with his daughter Laurie (Lisa Eilbacher) Stacy’s new target.

William Roberts’ screenplay seems to have taken the series of eight murders by Richard Speck in 1966 as his inspiration for the basic crime plot here. Kessler’s daughter is also a nurse rooming with three other nurses which serves as the climactic murder suspense sequence of the film when Stacy comes calling (a sequence that plays very flat for the most part with the ridiculously helpless women simply standing there letting themselves be slashed instead of raising even a finger in their own defense. There is one nice surprise moment near the end of that scene, but it doesn’t exactly rescue the unintentional hilarity of what has come before). But the screenplay is inept in lots of other ways: there is no explanation offered for Stacy’s tendency to commit the murders in the nude (and a last reel run down a city street in the nude chasing a victim doesn’t seem to pose any problem for the inhabitants of this neighborhood). The argument of outlandishly using the insanity plea to get a serial killer a minimal sentence is poorly posited and developed, and Leo’s final act may be a satisfying end to the movie but is just the beginning of the potential investigation to come. Even worse, screenwriter Roberts does not have a felicitous way with dialogue: speeches here are rank with clichés passed off as something intellectual or meaningful. And while director J. Lee Thompson commendably resists gory close-ups of all the grisly murders while they're happening (we almost always see the aftermath only), the built-in suspense of the stalking killer always seems a bit dissipated, and a murder in the shower or a killer hiding in a closet looking through door slats recalls more anxious moments from previous thrillers with more creative direction going for them.

While the veterans in the cast do solid work: Charles Bronson is stoic but determined, Wilford Brimley is all business as the police captain, Robert Lyons is a dedicated district attorney, Geoffrey Lewis is forceful as the killer’s crafty defense lawyer; the younger members of the cast are at opposite ends of the spectrum from one another. For every Andrew Stevens or Paul McCallum (who plays a pot smoking lab tech) who are at ease with dialogue and movement, two of the principal young people of the cast seem mostly stiff and uneasy before the camera. Gene Davis as the psychotic killer does well with his taunting closing speech and certainly deserves kudos for his willingness to play so much of the movie in the nude, but much of his work earlier in the picture seems robotic and zombie-like. Lisa Eilbacher as Leo’s daughter Laurie is likewise unnaturally inflexible with line readings and seems uncomfortable before the camera. For so many of the movie’s most important moments hanging on their effectiveness, it has two strikes against it from the get-go with these two mediocre actors.

The film’s theatrical aspect ratio of 1.85:1 is faithfully reproduced in this 1080p transfer using the AVC codec. Sharpness is always more than adequate (though quite a few close-ups of the star are softened), and color is quite good with realistic skin tones throughout. Black levels are not outstanding, and contrast consistency varies a bit but is never seriously a problem. There are random dust specks to be seen throughout the presentation, but, once again, they aren’t a major intrusion into the transfer’s effectiveness. The movie has been divided into 24 chapters.

The DTS-HD Master Audio 1.0 sound mix is a typical mono sound design used in low budget films of the period. Dialogue is always clear and is not compromised by the use of Robert O. Ragland’s background score or the ambient sounds used here and there. No age-related problems with hiss or crackle are present at all.

10 to Midnight seems a bit sluggish compared to other thrillers of its era, but it has its own unique qualities that certainly have kept it in cinemagoers’ minds for more than three decades. There are only 3,000 copies of this Blu-ray available. Those interested should go to www.screenarchives.com to see if product is still in stock. Information about the movie can also be found via their website at www.twilighttimemovies.com or via Facebook at www.facebook.com/twilighttimemovies.

I love every second of this movie and it's certainly my favorite of Bronson's Cannon period. With that said, I really wasn't too happy paying $35 for this release and it's certainly the most I've ever paid for a film on Blu-ray. I haven't had time to go through it yet.
You must log in or register to reply here.