Long time fans of wacky TV comedy Community weren’t surprised when NBC cancelled the show after its fifth season, especially with the less-than-funny ouster of creator and showrunner Dan Harmon still fresh in everyone’s minds (for the unacquainted, you can get a taste of the problems this created in my review of the Complete Fourth Season DVD).

Cancellation seemed like an inevitability as far back as Season Three, so NBC’s decision to finally drop the axe – despite the show getting back to form with Harmon’s Season Five reinstatement – seemed more like a mutual decision to move on than an outright betrayal by the network. Though still painful, cutting the show after so many struggles seemed best for both parties, giving the series a chance to continue on another carrier and NBC the opportunity to ruin another program it didn’t understand (I keed, I keed).

In June 2014, consistent with Community’s out-of-left-field MO, beleaguered tech company Yahoo! announced it would be picking up the series as part of its new streaming service, Yahoo! Screen. Though Screen was very much an unknown, it was clear the powers-that-be would give Harmon and Community a wide berth as the online service found its legs. Ultimately, the latter never happened (Screen was dissolved back in January, though Community episodes are still available for streaming under the site’s “TV” section), but the show was able to continue uninterrupted through another 13-episode run, giving it and its fans a chance for a proper sendoff.

In keeping with the show’s “six seasons and a movie” rallying cry, however, die hards hold out hope for a movie to continue the series’ antics. Though it doesn’t look like this will happen any time soon, it’s certainly possible if reunion projects continue to be so popular with online distribution platforms. Even if a movie never comes to be, the series still ended on its own terms as it explored what it meant for the characters – Jeff (Joel McHale), Abed (Danny Pudi), Annie (Alison Brie), Britta (Gillian Jacobs), Chang (Ken Jeong), the Dean (Jim Rash), along with a couple newbies played by Paget Brewster and Keith David – to be inextricably tied to Greendale Community College and its less-than-stellar academic reputation (“Basic Crisis Room Decorum”). Though the situational humor was sometimes more bizarre than usual (“Intro to Recycled Cinema”), Harmon and his writers never seemed to lose their way with the characters and their ultimately sweet, off-kilter friendship that gave the show its heart (“Basic Email Security” and “Emotional Consequences of Broadcast Television”).

Community: The Complete Final? Season includes the 13 episodes that streamed on Yahoo! Screen between March and June 2015:

Video quality seems on par with the previous release, meaning viewers will notice occasional moiré in fine patterns, compression noise in backgrounds, and softness or haziness in wide shots. However, color, black level, and contrast are uniformly solid, suffering only during the dimmest of light levels. There’s also a touch of edge haloing from time-to-time, though not enough to distract. Overall quality and performance should also be better than streaming from Yahoo!’s website.

Surround activity in the 448 kbps Dolby Digital 5.1 audio track provides support for the music soundtrack, and some crowd noise and other types of environmental effects. The mix isn’t subtle, but it gives the show more dimensionality than a straight stereo mix. Bass response is solid, especially in the space adventure themed episode “Intro to Recycled Cinema,” and center channel dialogue is consistently clear and intelligible.

Past releases always included several audio commentaries, but they’re noticeably absent for this final release, making for a somewhat spartan set of extras, particularly for a final season.

Community Trivia (24:45): Cast and crew answer 20 questions about the series. They don’t do as well as you’d expect (or hope).

Six Seasons and a Finale (19:36): The cast and crew reflect on shooting the season and their feelings about the series ending.

The lack of bonus material is a little disappointing, but fans won’t be able to pass up Community’s final season, which nicely wrapped up the show after a number of struggles. Audio and video quality is on par with past DVD releases and for some that may actually be an improvement compared to the limitations of an all-streaming distribution system. 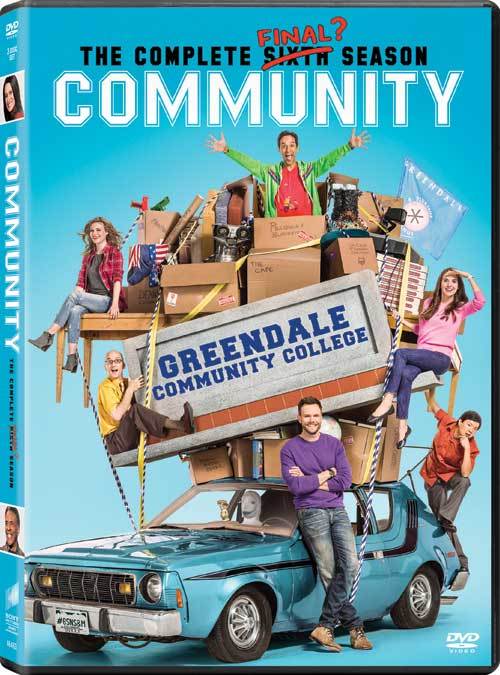