Between the years of his various television series (Maverick, Nichols, The Rockford Files, Bret Maverick), James Garner had a very respectable movie career. One of his most delightful leading roles was in Support Your Local Sheriff, a good-natured western romp which played to all of Garner’s strengths and proved to be one of the biggest hits of his career.

Between the years of his various television series (Maverick, Nichols, The Rockford Files, Bret Maverick), James Garner had a very respectable movie career. Not only did he co-star in some very big hits like The Great Escape, The Thrill of It All, and Move Over Darling, but he shared the screen with the likes of Marlon Brando, Steve McQueen, Julie Andrews, Doris Day, and Sidney Poitier along the way. One of his most delightful leading roles was in Support Your Local Sheriff, a good-natured western romp which played to all of Garner’s strengths and proved to be one of the biggest hits of his career. A non-sequel follow-up two years later Support Your Local Gunfighter might not have matched its predecessor in wit and charm, but it did provide another role tailored-made for Garner’s easy-going, affable persona.

Drifting into a lawless western town with street brawls and gunfights occurring at all hours, Jason McCullough (James Garner) elects to take the job of sheriff long enough to earn money for his long-sought dream: to travel to Australia and explore the world’s last frontier. Smarter and more laid-back than the average resident, McCullough soon brings the town residents to see things his way, aided by his expert marksmanship and his ineffable ability to anticipate trouble before it occurs and nip it quickly in the bud. With former stable boy Jake (Jack Elam) as his deputy, Jason arrests one of the town’s most disreputable bullies Joe Danby (Bruce Dern) and waits for his notorious pa (Walter Brennan) and the Danby family to attempt to free him so he can put them all behind bars.

The droll script by William Bowers fits Garner’s persona like a glove making for one of the most delightful western comedies ever put on screen. From the muddy streets to the noisy saloons, the succession of gunfights to the attempts at jailbreaking, everything rings true through Burt Kennedy’s journeyman direction. Garner’s McCullough doesn’t threaten or bully, and yet his captives stay in a jail without bars and gallop quietly through town so as not to disrupt the sheriff’s afternoon siesta. Joan Hackett’s Prudy Perkins provides the romantic interest, but with her klutzy ways and unsubtle stabs at independence, it’s far from a conventional romance. Even the climactic face-off pitting the sheriff, his deputy, and Prudy against the Danby clan stops for some hilarious fun between gunshots (though the comic momentum generated through much of the movie does grind to a halt through the early parts of that shootout). James Garner has never been better bringing his drily amusing Maverick personality to the role of McCullough, and the amazing stable of character actors on display to support him just can’t be beaten: Harry Morgan, Jack Elam, Walter Brennan, Henry Jones, Bruce Dern, Willis Bouchey, and Walter Burke. True, worthy comic actors like Kathleen Freeman and Chubby Johnson only get brief opportunities to make us smile, but the other named character actors each get prime chances to show their stuff.

Con man Latigo Smith (James Garner) escapes marriage to cathouse madam Goldie (Marie Windsor) by jumping off a westbound train and landing in Purgatory, Colorado, which is in the midst of gold fever. A series of get-rich quick schemes all succeed, but he continually loses his bankroll due to his roulette addiction and must remain in town where he eventually falls for town tomboy Patience Taylor (Suzanne Pleshette). In order to help her father (Harry Morgan) get to the rich vein of gold first instead of town crime boss Colonel Ames (John Dehner), Latigo masquerades as the front man for gunslinger Swifty Morgan (Chuck Connors) by choosing the town drunk (Jack Elam) to masquerade as Swifty until the gold is mined. But Ames has sent for the real Swifty who isn’t going to take kindly to anyone pretending to be associated with him.

The charm and affability of the script for Support Your Local Sheriff is not present in abundance in James Edward Grant’s script for Support Your Local Gunfighter. Laughs are sporadic, the movie is generally too noisy for its own good, and it’s not much fun seeing Garner’s Latigo continually come up the loser. The screenplay doesn’t give us enough nuances of his swindles either lessening their quirkiness and appeal, and Burt Kennedy’s direction while smooth is also characterless. Garner is less appealing in this picture than before where he’s the brightest guy in town though the romance with Suzanne Pleshette seems a little more genuine here than the one with Joan Hackett in the previous picture, and the film’s enjoyment quotient depends much more directly on what the supporting players can bring to the table, again a succulent selection of some of Hollywood’s greatest character talent: Jack Elam, Harry Morgan, Joan Blondell, Ellen Corby, Chuck Connors (who doesn’t get billing but has a very funny cameo to wrap up the picture), Marie Windsor, John Dehner, Henry Jones, Grady Sutton, Dick Curtis, Dub Taylor, and Kathleen Freeman.

Each of the films has been framed in its theatrical aspect ratio of 1.85:1 and is presented in 1080p resolution using the AVC codec. Apart from a couple of soft, grainy long shots early on, Sheriff boasts very good sharpness and rich color even if occasionally skin tones veer toward the red side of the spectrum. Contrast has been consistently delivered, and black levels are fine. Occasionally, a few specks and a dig or two in the image can be glimpsed, but Sheriff is generally a strong transfer. Gunfighter has fewer problems with softness, and there is no dust or dirt to speak of while hues are rich and true. Black levels are a bit stronger, too, while contrast remains outstandingly consistent. Each movie has been divided into 24 chapters.

The DTS-HD Master Audio 1.0 sound mix for each film is very era-typical with the dialogue, music, and sound effects all combined professionally into a pleasant if unspectacular soundtrack. Gunfighter may be the slightest bit stronger mix, but it’s basically a photo (audio?) finish. There are no age-related problems with hiss or crackle in either mix.

Audio Commentary: film professionals Lee Pfeiffer and Paul Scrabo have an informative conversation about Support Your Local Sheriff offering information about the principal actors and crew members and sharing anecdotes about their encounters with some of the legends who appeared in the film.

Six-Page Booklet: contains a worthy selection of color stills, original poster art for Sheriff on the back cover, and film historian Julie Kirgo’s appreciative paean to James Garner and his two starring roles in these movies.

Two movies for the price of one is a great bargain in Support Your Local Sheriff/Support Your Local Gunfighter courtesy of Twilight Time. The films both look and sound very good indeed and are recommended. There are only 3,000 copies of this Blu-ray available. Those interested in purchasing it should go to either www.twilighttimemovies.com or www.screenarchives.com to see if product is still in stock. Information about the movie can also be found via Facebook at www.facebook.com/twilighttimemovies.

I agree with your assessment that Sheriff is qualitatively better than Gunfighter, but I love them both. Sheriff reminds me so much of Maverick that it almost seems like a Maverick film(before the Mel Gibson remake).
Reactions: Matt Hough

And has Jack Elam ever been better than he is in these films?

Timothy E said:
And has Jack Elam ever been better than he is in these films?
Click to expand...

I agree. His contributions to both films are stellar.
You must log in or register to reply here. 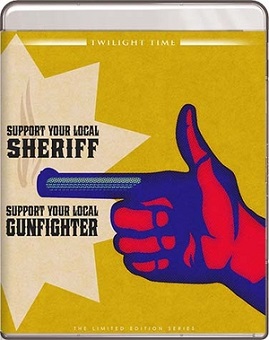