Forum List What's new Dark Style Change width
Log in Register
What's new Search
Menu
Log in
Register
Navigation
Install the app
More options
Dark Style
Close Menu
Posted on December 10, 2020 by Neil Middlemiss
You are using an out of date browser. It may not display this or other websites correctly.
You should upgrade or use an alternative browser.
A brilliant, thrilling film 4 Stars

Collateral is an intense, absorbing, thrilling cinematic experience. Superb lead performances by Foxx and Cruise, strong supporting performances by Ruffalo, Pinkett-Smith, Berg, Javier Bardem, and others. A few of the minor players here would make their way into Mann’s excellent but short-lived CBS drama, Robbery Homicide Division, a show that employed this film’s aesthetic. That aesthetic is an intrinsic part of Collateral, bringing a cinematic reality to the tension of the story. It is served well by the UHD treatment, and while this won’t become a reference disc for your home theater, it’s a treat.

“Someday? Someday my dream will come? One night you will wake up and discover it never happened. It’s all turned around on you. It never will. Suddenly you are old. Didn’t happen, and it never will, because you were never going to do it anyway. You’ll push it into memory and then zone out in your barco lounger, being hypnotized by daytime TV for the rest of your life. Don’t you talk to me about murder. All it ever took was a down payment on a Lincoln town car. That girl, you can’t even call that girl.”

Tom Cruise stars as Vincent, a cold contract killer in Los Angeles for one night. Chance or fate sets him in the taxi driven by Max (Jamie Foxx) where he coerces the kind cabbie to make 5 stops so that he can complete his ‘5 jobs’. Max tries several times to escape his dire situation, but each failure reaps more bloodshed. Max must find a way to stop the killing and save himself before the night is over. Cruise is at his darkest and perhaps most surprising as the pepper-haired hit man. The construct of setting the events over the course of one night maintains a palpable tension and cohesiveness to the drama, rendering Collateral one of director Michael Mann’s most potent films.

Beyond the killer/cabbie partnership in which Jamie Foxx’s Max is the unwilling participant, Collateral is built around the verbal dynamic between the characters. Hit after hit, Max struggles with his fear of the out-of-control predicament in which he finds himself, and Cruise’s Vincent takes it all in stride. Additional strands of plot and story – such as the L.A. detectives (Mark Ruffalo, Peter Berg) playing catch up through the crime scenes left behind, and the honest and natural attraction and connection Max experienced with Annie (played by the criminally underrated Jada Pinkett Smith), a ride whom he had just dropped off when he picked up Vincent, flesh out the world of Mann’s L.A. and add dimension to an already compelling film.

Michael Mann’s filming technique and cameras used on Collateral were the direct result of his experience producing the quality but short-lived CBS show, Robbery Homicide Division – hand-held, natural/city lighting used as the primary or sole source, a very spur of the moment sense of filmmaking sufficiently apt for the scene and story. There is a distinct favoring of mosaic shots setting both a mood and tone to the picture. Snaps of city streets and streetlights bleeding across the car windows, the unnaturally electric lights of Los Angeles establishing a cold, unknowing outside that Foxx’s character can only feel ignored by. It is a spectacular form for this thriller to have taken. Mann would seek to accomplish the same sense in 2006’s big screen adaptation of Miami Vice – but an excess of the style coupled with characters audiences could not recognize or connect to – doomed that venture. In Collateral – we so easily identify with Max and become invested in him surviving his unsettling circumstances that, despite finding some sense of awe of Cruise’s Vincent, root for the cabbie wholeheartedly.

Though Collateral is often cited as the rare occasion where Tom Cruise shed his likable good-guy image to play a terrifically cold killer, it is Jamie Foxx’s everyman performance that stands the furthest out. Foxx demonstrates great maturity and ability as the cabbie thrust into a grim nightmare chauffeuring a hitman around Los Angeles and this role is a great foreshadowing of his Oscar winning turn as Ray Charles.

Collateral is a collision, a conflagration of the impenetrably stoic and sterile killer instincts of Vincent and the calm and open-hearted, likable Max. The dynamic that exists between them, as it ebbs and flows between tenuous connection and diametric opposites – is the engine that fuels this thrilling, superbly gripping film.

Collateral, framed at 2.40:1, in Ultra High Definition is an interesting experience. This isn’t an obvious choice to show off the goodies of the format, and yet, director Mann, and his cinematographers Dione Beebe and Paul Cameron working to make a digital looking cinematic experience, shooting with high-definition cameras almost entirely at night, offers something unique.

Detail gets an edge up over the previous Blu-ray release with consistent and stable grain, but the shooting choices mean that gains are as obvious. The reliance on street and other naturally occurring artificial light as the primary source, has always given Collateral a unique character, a fluorescent artifice that’s embraced and that serves the narrative perfectly. Interior scenes, particularly inside the jazz club, offer the best example of what this UHD version has to offer.

Black levels are deeper, more pronounced throughout courtesy the Dolby Vision grading (along with HDR10), and skin tones are a hair closer to natural. What this 4K release seems to do most is bring us a clearer view of what Collateral could and should look like under the most ideal of circumstances to present Mann’s vision.

Paramount delivers Collateral with the same strong DTS-HD 5.1 Master Audio option. Precious little non-naturally occurring sound is to be heard during the film and so it is the ambient sounds that collectively provide the bulk of what we hear. Heavily focused on dialogue, the center channel provides the lion’s share of that. Bursts of sound – from falling victims onto cars or gun shots that echo loudly in suburban settings – ring around the speakers wonderfully. Club music prompt the subwoofer to kick in from time to time, but the real power of this audio is the aforementioned ambient sounds of city life at night. It is in the quiet moments where whispers of the world outside of Vincent and Max creep in that this audio shines – in its restraint.

Commentary by Director Michael Mann: Michael Mann is known for his perfectionism; his meticulous attention to detail and pursuit of very particular elements when shooting his pictures (even when such details don’t appear to be terribly meaningful to others) – and so this commentary is a wonderful opportunity to hear the director himself explain and express his perspective and reasoning for many things. This commentary represents a great dissection of the film and the type of film that Mann was making. Mann has made many great films – Heat, Manhunter among others, and hearing him talk about film, purpose, and the meaning of his mise en scène is a genuine treat.

City of Night: The Making of Collateral (40:58): This surprisingly in-depth making of features interviews with Director Michael Mann and the principal stars discuss the film, the element of chance, the reasons of fate, and the intriguing story and skill of the director.

Shooting on Location: Annie’s Office (2:24): This special feature – as we listen to director Michael Mann – really pulls back to the essentials of the story Mann is telling, that of a hunter with extreme skill prowling the unsuspecting city of Los Angeles at night while the world goes on unaware.

Visual Effects: MTA Train (2:27): Mann’s attention to detail is on full display here as he discusses the customization of the background visual effects as the train travels through the city.

Special Delivery (1:09): Interesting (and extremely brief) special feature following Tom Cruise disguised as a Fed-Ex delivery guy in an experiment to have the hugely recognizable face of Cruise blend into the crowd as his Vincent character is designed to do.

Deleted Scene with Commentary (1:58): Mann talks about a scene excised from the final cut and the decision to leave it out to maintain the momentum of the other story elements

Collateral is an intense, absorbing, thrilling cinematic experience. Superb lead performances by Foxx and Cruise, strong supporting performances by Ruffalo, Pinkett-Smith, Berg, Javier Bardem, and others. A few of the minor players here would make their way into Mann’s excellent but short-lived CBS drama, Robbery Homicide Division, a show that employed this film’s aesthetic. That aesthetic is an intrinsic part of Collateral, bringing a cinematic reality to the tension of the story. It is served well by the UHD treatment, and while this won’t become a reference disc for your home theater, it’s a treat.

Adding this title to my purchase list next year.

Special Delivery (1:09): Interesting (and extremely brief) special feature following Tom Cruise disguised as a Fed-Ex delivery guy in an experiment to have the hugely recognizable face of Cruise blend into the crowd as his Vincent character is designed to do.
Click to expand...

This was the most disappointing feature to me from the original DVD release, based more on how much the studio hyped this feature (they made it out as if cameras followed Cruise for the entire day, capturing reactions from those receiving packages), then only to find just how brief it is.
You must log in or register to reply here. 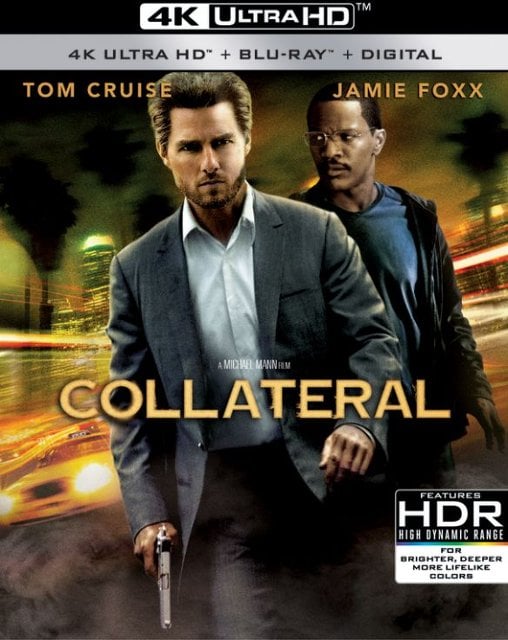