Though failing to conjure up many thrills and scares, Children of the Corn remains an entertaining excursion into 1980’s horror happenings. The darkness that King seems to frequently see in the simple, innocent, and quiet life of small towns is in full parade here, though at the hands of children murderously run amuck. The touch of King is diluted by a less than thrilling screenplay and average-at-best direction, but even still – there is something for horror fans to dig into with Children of the Corn – even with the dodgy special effects on display in the finale.

“And A Child Shall Lead Them…”

Children of the Corn is the story of two travelers, Burt (Peter Horton) and Vicky (Linda Hamilton) who strike a child on an empty road. The child dies, but appears to have been fatally wounded before they struck him. Looking for help, they find the desolate nearby town of Gatlin, Nebraska. Here, Burt and Vicky eventually discover that all the adults were slaughtered by children, led by religious child zealot, Isaac (John Franklin). Under Isaac’s command, henchman Malachai (Courtney Gains), and the rest of the town’s children, offer reverence and worship to something mysterious they refer to as “He who walks behind the rows”

In town, as Burt and Vicky look for a phone to call for help (in the 80’s and 90’s, the poor souls in horror films could never find a phone that worked. Today it’s poor cell phone reception that dooms them), they find a young girl, Sarah (Anne Marie McEvoy) who draws pictures of the future. Burt heads back into town (where he finds himself in trouble and is helped by Sarah’s brother, Job (Robby Kiger)), while Vicky stays behind with the girl they found in the house. Vicky is abducted by Malachai and his prepubescent goons, setting in motion the showdown between the children, led astray by the evils behind the cornfield, and the vicious Malachai.

Children of the Corn isn’t a bad film, it simply lacks cohesion in its foe, definition in its supernatural element, and compelling protagonists. The rejection of King’s screenplay for the film, which reportedly focused more on the children’s uprising and the Burt and Vicky characters, adds to the underwhelming sense one gets from watching this film. But all is not lost. There is good use of abandoned locations, which provides effective ambience and atmosphere for the cut-off, helpless travelers. There is even much to be said for the film’s pacing through the first and second acts, which present a careful, evenly balanced positioning of the young Job and Sarah (two kids immune to the religious fervor and who wish to escape), and the unwitting adults heading into the realm of the murderous child mob.

The direction in the hands of Fritz Kiersch, however, is functional, and efficient. It may lack imagination, but it serves the story and budget well. We see some good use of light versus dark, particularly in the barn scene near the end and the garage scene early on, but otherwise, it’s all a little plain. Children of the Corn also fails to deliver the chills and scares expected of a story born from the earlier works of Stephen King. At the core of the story is a premise with real potential – but any real tension is replaced by a standard formula of bad-guy chasing good guy functions. What does work, particularly in revisiting this film since my first viewing and review, is the power of quiet. The use of wind blowing through corn, of the quiet of empty streets and buildings, is far more effective than if they had used a constant ominous underscore.

The leads of the film, Peter Horton (thirtysomething, Brimstone) and Linda Hamilton (The Terminator) fill the horror-movie shoes well enough, though the irrational decision making by the Burt character limit much of the empathy we should feel for them both. The children, on the other hand, are very, very good. Courtney Gains (The ‘Burbs) gives the red-headed brute, Malachai, a believable bloodthirsty, angry killer gusto. Gains has been seen on television in numerous guest appearances through the years showing that there is more to him than the rather one-note but effective character in Corn. Playing Isaac, the televangelist-styled religious crazy, is John Franklin. Franklin, writer of 1999’s direct-to-video sequel Children of the Corn 666: Isaac’s Return has a unique look in the film. Appearing as a young boy, Franklin was actually 24 when this film was made. Undoubtedly, his look and unsettling performance has given Children of the Corn much of its value and staying power. As the seer Sarah, and her brother Job, Anne Marie McEvoy (Cabbage Patch Kids: First Christmas) and Robby Kiger (The Monster Squad) –are likeable and empathetic.

It has been over 33 years since Children of the Corn graced movie theaters. We have seen through many of King’s stories a similar theme play out in the actions, and comeuppance, of people who succumb to religious grandiosity. King, like a moth to the flame, keeps revisiting characters who obscure and obfuscate the truer notions of religious texts in self-serving, violent, and intolerant ways. Peter Horton’s sweaty and bloody lecture near the end of the film seems to sum up nicely what King has woven into many of his stories, such as The Mist, The Stand and even The Dead Zone.

In the end, Children of the Corn is a product of the 80’s and one of a few films that helped further catapult King’s name as a horror master, even if it was the weakest of those early adaptations. Made for precious little money, its box office haul of $14.5 MM may not have been huge, but was more than enough to be a solid return on investment, and the premise appealing enough to sustain numerous sequels.

This Children of the Corn Blu-ray marks the first ARROW release in my collection and I am very impressed. The previous Blu-ray release from Anchor Bay (which I reviewed back in 2009) was very good, but Arrow, providing a 4K scan from the original 35mm camera negative, and cleaning up even more detritus from the image, while remaining faithful to the color grading and natural film grain (which is very noticeable in dark/night shots), delivers the best version of this film on home video.

There are still some image flaws, some inconsistencies here and there, but for a film this low budget, I am surprised there were not more hurdles that the restoration could not overcome without resulting in signs of obvious digital tinkering.

Daylight sequences positively sparkle, colors pop, and the pervasive yellow flavor to the palette helps build a palpable sense of atmosphere in the abandoned town. Flesh tones are natural, detail levels excellent. This is a terrific video presentation.

This release also properly frames the image at 1.85:1.

As Arrow notes, the “original 4 track stereo mix was transferred from the original Dolby mag reels” and  “remastered to 5.1 by Lakeshore at Deluxe Audio services.” An LPCM 2.0 mix is also included.

The 5.1 DTS-Master Audio track, much like the Dolby TrueHD 5.1 from the previous Anchor Bay release, doesn’t deliver much power, or surround action, but it does capture what the film has to offer. The audio gets most of its workout during the climactic sequence where the LFE is called up to action and the surrounds get some work to do.  Throughout, most of what the audio is tasked with is dialogue from the center channel, and some left/right work. Jonathan Elias’ score, which was clearly influenced by Goldsmith’s Omen soundtrack, is used to nice effect (or rather, isn’t over used). Overall, this isn’t a film that leverages its audio effects or movement to achieve its aims, but the 5.1 track is more than enough to convey what the film has to work with.

Arrow has included almost all of the previously available special features (missing is the Fast Film Facts and Stills Gallery), but has produced a number of new features which are most welcome, especially the new interviews with production principles.

. . . And a Child Shall Lead Them – Brand new interview with actors Julie Maddalena and John Philbin.

Audio Commentary with Director Fritz Kiersch, Producer Terrence Kirby and Actors John Franklin & Courtney Gains:  The director and producer provide interesting anecdotes from the filming of their low-budget flick, which raises the value of the commentary. The actors provide information from the other side of the creative coin to present a good, if sometimes patchy commentary. This was originally recorded back in 2000/2001.

It Was the Eighties (14:09) – A good, and at times revealing interview with Linda Hamilton, which serves up some good stories from the prep and making of the film from her perspective.

Stephen King on a Shoestring (11:20) – Interesting featurette with an interview with Producer Donald Borchers, recalling the birth of the film project and the obstacles faced in getting it made.

Welcome to Gatlin: The Sights and Sounds of Children of the Corn (15:28) – Focusing on the sounds and score used for the film, it showcases Jonathan Elias’ score – sounding better than it does in the actual film, and presents interviews with Production Designer Craig Stearns, and composer Elias.

Harvesting Horror: The Making of Children of the Corn – (36:14) – Comprehensive featurette reflecting upon the production of the film, from location scouting to casting and much, much more.

Storyboard Gallery – You can select the storyboard frame to view or watch as a slideshow.

In the agglomeration of films adapted from Stephen King short stories, Children of The Corn surely stands as the progenitor; the inaugural effort from which a host of others were born. King’s novels had already begun to see adaptations, with films like The Shining, Carrie and Cujo making successful leaps to the big screen. But his short stories, of which there are many, were untapped (aside from The Boogeyman) before Corn. And King’s works still generate buzz and interest when adapted even to this day. This year alone saw The Dark Tower and IT make waves, though only IT translated that interest into considerable box office returns. But King still sells.

Arrow’s release of Children of the Corn will be a welcome addition for fans and just about the best way for newcomers to find out why longtime fans have been so enamored with the film. 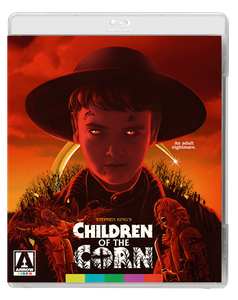