Adequate popcorn thriller for fans of the genre 2.5 Stars

Produced in 2015 but shelved until this year, Luis Prieto’s Kidnap allows Oscar-winner Halle Berry that rare chance to prove what a mama bear ferociously trying to save her cub from abduction looks like.

Produced in 2015 but shelved until this year, Luis Prieto’s Kidnap allows Oscar-winner Halle Berry that rare chance to prove what a mama bear ferociously trying to save her cub from abduction looks like. With a brief running time and a relentless pace despite more than a handful of plot holes that never get plugged, Kidnap provides a workable popcorn thriller that hums nicely along provided one doesn’t think too long and hard about how the story inevitably shakes out.

Divorced single mom Karla Dyson (Halle Berry) is enjoying a rare day at the park with her six-year old son Frankie (Sage Correa) when she’s distracted by a phone call from her divorce attorney allowing the enormous Margo (Chris McGinn) to abduct her child and head off in a turquoise Mustang GT out of New Orleans. Karla jumps in her own minivan in hot pursuit, the vehicles bobbing and weaving through traffic at breakneck speeds on a crowded turnpike. When it becomes clear that Karla isn’t going to stop following them, the male driver Terry (Lew Temple) pulls over and sends Margo back to Karla’s car with a $10,000 ransom demand for her son. But it’s all a ruse to distract Karla while Terry makes a getaway and Margo tries to strangle Karla. Karla manages to avoid death once again, but it’s only the first in a series of encounters with these desperate kidnappers who are willing to do anything to stop her.

While the film’s direction and second unit work become far more important than its Knate Lee-written screenplay, the screenwriter does eventually explain the motives for the kidnapping and the desperation of Terry and Margo to keep their identities on the down-low. In order for the plot to work, however, the Louisiana Highway Patrol must be shown to be completely inefficient or unconcerned as several hit and run victims, a stolen vehicle, and a downed highway patrolman (likely dead) don’t instantly send out a barrage of squad cars and motorcycle cops hunting for these two vehicles engaged in a deadly high speed chase down the turnpike. It’s also too convenient that with all the cars everywhere during the chase, the tunnel where Margo tries to kill Karla is remarkably free of cars or pedestrians and the ghastly pinning of the motorcycle policeman between the two cars doesn’t generate a ton of cellphone photos and emergency calls to investigate. A couple of 911 calls from bystanders and an APB for Karla’s red minivan also get minimal results (there is one red minivan stopped, but the obvious mistaken identity isn’t dealt with nor does the pursuit seem to continue after the mistake is made). With all that said, the film’s reason for being, the wild chase down the superhighway, the several twists and turns of the plot that bring Karla into contact with both Margo and Terry on a couple of occasions each, and the climactic search around an isolated house in the Louisiana bayou for her child are all handled well by director Luis Prieto with suspense ratcheted up to the max and terror nicely sustained despite the lapses in the plot.

Halle Berry has plenty of screen presence to hold her own for three-quarters of the movie, even when the script demands that she talk to herself and the missing Frankie or offer prayers to God for assistance in her time of trouble. Her ferocity grows palpable as the film runs as she becomes more and more aggressive in her pursuit of her child. Sage Correa is an appealing little Frankie though due to the film’s point of view being with Karla, we never really see if he offers any resistance at all with the kidnappers, especially once they separate and only Terry is left to deal with the boy. Chris McGinn and Lew Temple may be perhaps a shade too stereotypically redneck as the kidnappers, but there is no denying they’re both threatening and formidable adversaries for Berry’s Karla.

The film’s 2.40:1 theatrical aspect ratio is faithfully rendered in 1080p using the AVC codec. Sharpness isn’t always razor-edged though for most of the film, it’s well above average and often quite striking. Color is realistic throughout with appealing skin tones. Black levels are excellent easily blending into the letterboxed bars in the later scenes inside dark environments. The movie has been divided into 20 chapters.

The DTS HD Master Audio 5.1 sound mix delivers the visceral aural activity to keep the listener on the edge of his seat. Dialogue has been relegated to the center channel. There is plenty of atmospheric activity in the fronts and rears as the vehicles wage their war on the highway and get involved in numerous collisions and inevitable crashes. The LFE channel has some explosive moments as well to keep the bass rumbling nicely during some of the spectacular stunts. The driving (no pun intended) background score by Federico Jusid gets excellent spread through the front and rear soundstages.

A pure popcorn thriller good for a quick adrenaline rush with no lingering after effects, Kidnap would make an interesting rental for fans of the star or the genre. The Universal Blu-ray release offers very good picture and outstanding sound design as compensations for some of the sillier plot lapses the movie contains.

I LOVED the trailer for this film. I really want to enjoy this film.

When I finally get a chance to see it, I'll try not to overthink things!

Yep, taking off your thinking cap will guarantee an enjoyable and unprolonged thrill ride.

I have a HUGE stack of unwatched discs from which to choose. But this was the choice today because I am home...and sick with a REALLY BAD flu. So I'm a little foggy...and medicated. Perfect conditions to watch a film like this, right? Right!

This is REALLY not a good film. Halle Berry didn't save it, but it would have been that much worse without her. 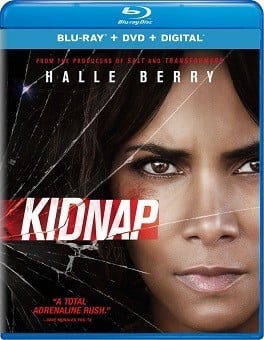