Mind numbing and by the book thriller 3 Stars

Despite good performances by leads Naomie Harris and Tyrese Gibson, Black and Blue is a predictable by the numbers good cop versus corrupt cops thriller.

Rookie cop Alicia West (Naomie Harris) takes on an extra shift to cover for her partner who has a family commitment. While on patrol, her senior officer Deacon Brown (James Moses Black) tells her to stay in the car while he goes inside to check on a building. Hearing gunshots, West enters the building and witnesses Narcotics Detective Terry Malone (Frank Grillo) shoot a young drug dealer in cold blood and his partner in turn shoots her point blank, taking most of the shots to her kavlar vest, capturing all of these events on her bodycam. West escapes, but is now being pursued through the streets of New Orleans by a group of corrupt police officers who have been taking kickbacks from the various gangs and drug dealers. To make matters worse, Malone convinces one of the drug lords, Darius (Mike Colter), that West was responsible for the killing of his nephew, and now she has his gang after her as well. West finds some assistance in convenience store clerk Milo “Mouse” Jackson (Tyrese Gibson), a reluctant ally who just wants to see some justice in his neighborhood.

Black and Blue is about as cookie-cutter of a thriller as you can get. The police department is under investigation for corruption. West returns to her run down neighborhood as a cop, having left ten years prior to join the military and fight in Afghanistan. “Mouse” no longer trusts the police, who often help themselves to items off his shelves but fail to provide support when a robbery is committed. The movie even attempts to take on racial tensions by making the gangs and drug dealers African-American while most of the corrupt cops are white. And we know the minute Malone kills the boy with Officer Brown that West’s normal partner, Kevin (Reid Scott), is likely on the take as well, although West is rather oblivious to it at first. Black and Blue is director Deon Taylor’s second movie released in 2019 after The Intruder (a stalker thiller), from a script by Peter A. Dowling, who has written slightly better thrillers like Flightplan. There is nothing overly original here, and much of it will induce lots of eye-rolling. The only good thing here are the performances by Naomie Harris (who previously had supporting roles in Rampage and Moonlight) and Tyrese Gibson (Fate of the Furious), who almost carry this movie beyond its simplistic and often idiotic plot.

Sony has included a very impressive DTS-HD MA 5.1 mix as the default track that was very active for a low budget feature like this one. From the opening titles, surrounds kick in with discrete instrumentals and other sound effects, and imaging is exceptional as unseen helicopters fly overhead. LFE is strong without being overbearing or boomy. Dialogue is clear and understandable throughout.

Line of Fire (1080p; 4:02): Director Deon Taylor along with members of the cast and crew discuss the use of bodycams in the film and how unique that makes their movie. I guess none of them has ever watched an episode of the ABC drama The Rookie, currently in its second season.

Digital Copy: An insert contains a code to redeem a copy on Movies Anywhere.

The performances of Naomie Harris and Tyrese Gibson almost carry Black and Blue, a predictable and mind-numbing thriller.

I'm going to buy the 4K digital once it hits the $9.99 mark as I enjoy these type of movies. Thanks for the review.
You must log in or register to reply here. 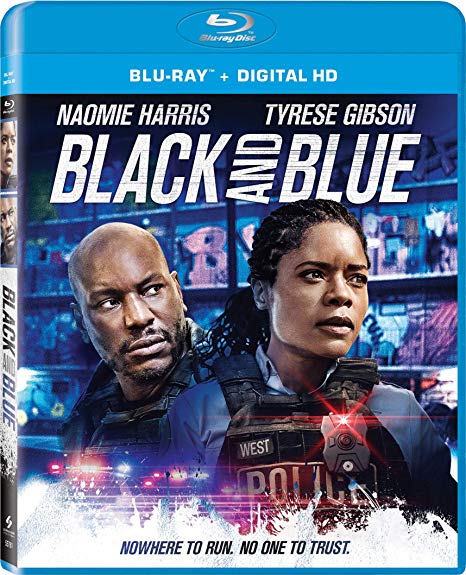