Forum List What's new Dark Style Change width
Log in Register
What's new Search
Menu
Log in
Register
Navigation
Install the app
More options
Dark Style
Close Menu
Posted on January 17, 2020 by Todd Erwin
You are using an out of date browser. It may not display this or other websites correctly.
You should upgrade or use an alternative browser.
Dreadful 2.5 Stars

A talented voice cast and first-rate animation can’t save The Addams Family from an uninteresting story line and flat jokes.

Gomez and Morticia Addams (Oscar Isaac, Charlize Theron) are forced to flee their homeland when the locals arrive with torches and pitchforks on their wedding night. With some help from Uncle Fester (Nick Kroll) and Thing, the couple relocates to New Jersey, picking up Lurch (Conrad Vernon) along the way, and settle in what was once an asylum atop a fog-covered hill. Thirteen years later, the Addams have given birth to daughter Wednesday (Chloë Grace Moretz) and son Pugsley (Finn Wolfhard), and it is time for Pugsley’s Mazurka, a long-time family tradition of when a boy becomes a man and proves he can defend his family. One day, the fog lifts, and the Addams realize there is a town at the bottom of the hill. They investigate, and discover that the town of Assimilation is part of a reality TV show hosted by Margaux Needler (Allison Janney) who also designed the town and is about to sell all 50 homes as part of her show’s season finale. Margaux finds the Addams’ mansion an eyesore, attempting at first to conduct a makeover and, after failing, try to use social media to get the town people to force the Addams to leave.

I used to watch The Addams Family reruns while growing up, and really enjoyed the two live action films directed by Barry Sonnenfeld, The Addams Family and Addams Family Values both of which featured a hilarious performance by Cristina Ricci as Wednesday Addams. This new animated incarnation, directed by Greg Tiernan and Conrad Vernon (the same team responsible for Sausage Party), lacks the charm of the 1960s Tv seris and Sonnenfeld’s live action films. It also lacks the witty humor, with jokes often falling flat. The voice talent, which also includes work from Bette Midler, Martin Short, Catherine O’Hara, and Elsie Fisher is excellent, and so is the animation created by Cinesite Studios, but it is not enough to elevate the movie from its boring story and stale jokes.

The Addams Family is a CG animated feature, and was likely completed as a 2K digital intermediate. Universal’s 1080p AVC-encoded transfer retains the movie’s 1.85:1 theatrical aspect ratio, and is another winning presentation. Colors are bold and vivid where needed without appearing overly saturated – the Addams estate is often muted in its color palette while the town of Assimilation is bursting with bright colors. Black levels are excellent, with deep shadow detail within the Addams estate while the town of Assimilation has intentionally blown-out contrast to go along with its vibrant color scheme. Detail is very good, from the rotting wood grain of the house to dust prints on Lurch’s jacket.

Although the movie’s end credits indicate the existence of a Dolby Atmos mix, Universal’s Blu-ray contains a DTS-HD MA 7.1 track in its place. That’s a shame, because the 7.1 mix included here is a very active and immersive one. The mansion’s haunted voicings of “Get Out” emanate all around you and literally shake the floorboards, for example. Pugsley’s various explosions also rock the listening area with strong LFE, while subtle touches such as wind balance the track. Dialogue is well-prioritized, always clear and understandable.

The features are short and a bit too congratulatory, and begin to play automatically at the end of the feature or can be selected from the main menu.

Digital Copy: An insert contains a code to redeem a digital copy on iTunes.

The Addams Family is a dreadful experience, lacking the macabre charm and humor of both the 1960s TV series and live action films from the 1990s.

Still would have purchased it, if it were in 3D.

I loved the film, saw it twice (rare these days) and am sorry you didn't enjoy it as much as I and many others did.

I'm not going so far as to say "no sale," but if there was a 3D available I likely would have pre-ordered it.

Now, I'll wait for a sale probably of under $10 before I buy.
You must log in or register to reply here. 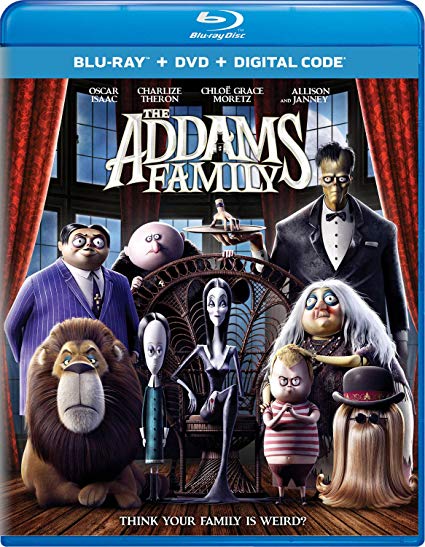