Posted on October 6, 2016 by Matt Hough
Fifth season of an increasingly disappointing series is barely up to par. 3 Stars

The fifth installment of FX’s hit series American Horror Story subtitled Hotel is the least effective yet of the ongoing series, offering a decent set-up for horror that instead comes down on the side of sentimental domesticity and camp.

The fifth installment of FX’s hit series American Horror Story subtitled Hotel is the least effective yet of the ongoing series, offering a decent set-up for horror that instead comes down on the side of sentimental domesticity and camp. As has become increasingly the case with the American Horror Story franchise, visceral shocks and blind surprises have been superseded by excess graphic mutilations and lots of sex in all flavors and numbers (and a real excess of cigarette smoking), and certain subplots get started only to be stopped and dropped or wrapped up in rather unsatisfactory fashion. The series is still masterfully produced and the ensemble cast gulled and cullied from previous seasons of the show in mostly new roles once again offers some genius performances through twelve episodes. But when the season comes to its end, there isn’t any sense of horror left at all but rather one of sentimental parting from characters who have become less of a threat and more like comfortable old shoes one can kick off and forget.

A series of serial killings around Los Angeles over the course of several years known as the Ten Commandment Killings comes to the attention of Detective John Lowe (Wes Bentley) who has rather been sleepwalking through the last several years after his son Holden (Lennon Henry) was abducted from a carnival. With his marriage to Dr. Alex Lowe (Chloë Sevigny) deteriorating fast, he checks himself into the Hotel Cortez, a grand Art Deco hotel with a very select clientele all hosted by a striking beauty known as the Countess (Lady Gaga). As he comes to find out, the hotel has both ghosts and vampires (who cut rather than bite to eviscerate their victims) occupying the premises, mostly at the behest of the ghost of the man who originally built it, James Patrick March (Evan Peters), a former serial killer who considers murder an art. Anyone who dies there is doomed to stay behind its doors forever, but John with his partner Detective Andy Hahn (Richard T. Jones) is too busy with the investigation of the grisly killings to give much thought to his accommodations strange though they may be.

Over the course of weeks, we get to know many different personalities of the souls living under the roof of the Hotel Cortez. There is the Countess’ latest boy toy Donovan (Matt Bomer) soon to be ousted in favor of the young runway model Tristan Duffy (Finn Wittrock). There is former heroin addict Sally McKenna (Sarah Paulson), always lonely and deciding that Detective Lowe might be the man for her. Check-in is provided by Donovan’s smothering mother Iris (Kathy Bates) who has pretty much cast her aside, so she turns to transsexual bartender Liz Taylor (Denis O’Hare) for solace. Tending to the rooms to keep towels and linens fresh and sparkling white is devoted housekeeper Hazel Evers (Mare Winningham). New to the hotel is fashion designer Will Drake (Cheyenne Jackson), relocating to the West Coast in the hopes that a change of scenery will provide a spark of new inspiration. His fabulous fortune is catnip to the Countess who plans to woo the brand icon into marriage to better insure that the Hotel Cortez will be better able to keep its doors open far into the future.

As the season progresses, it becomes clear that there are two story arcs which are slowly winding their ways into an intersection: the investigation and solution of the Ten Commandments murder spree and an ongoing revenge scenario on the Countess from a host of individuals whom she has managed over the years to disappoint, betray, or ignore. The latter revenge narrative is one the American Horror Story writers have used as a crutch to prop up several shaky seasons, and no excesses of hardcore gore and sexual peccadillos are going to breathe freshness into the writing. The writers also begin a story arc involving a monstrously deformed baby for the Countess that occupies several episodes but ultimately goes nowhere, and a subplot involving measles-ridden school children who are turned into vampires also reaches a less than satisfactory conclusion. Yes, there are some surprises in season five: Finn Wittrock spends some early episodes playing a haughty fashion model only to come back later on in the season as one of the most famous of movie stars, ultimately helping us understand why the Countess threw over Donovan for Tristan in the early going. There’s the famous Halloween-themed episode which brings famous serial killers John Wayne Gacy (John Carroll Lynch), Jeffrey Dahmer (Seth Gabel), Richard Ramirez (Anthony Ruivivar), and Aileen Wuornos (Lily Rabe) into the story to have a special dinner with host James March, and as has been the case with the past couple of seasons, there are nods to earlier years of the show as Sarah Paulson returns as Billie Dean Howard from season one and Gabourey Sidibe shows up in an episode as Queenie from season three. The real estate agent played by Christine Estabrook since season one makes another appearance this year.

Four performances are the real standouts this year: Sarah Paulson as the desperately needful Sally McKenna, Kathy Bates as the forgotten mother Iris, Denis O’Hare as the glamorous Liz Taylor, and Wes Bentley as the unravelling Detective Lowe. Also most effective are Angela Bassett and Matt Bomer as love objects of the Countess since discarded, Even Peters affecting speech patterns that cross Clark Gable with Franklin Roosevelt as hearty host James Patrick March, Finn Wittrock in his pair of very different roles, and Mare Winningham as the housekeeper who’s a stickler for bright whites. With Jessica Lange sitting out this season (and the next), Lady Gaga was cast in the chief glamour role of the Countess, but her acting varies between rudimentary and barely acceptable, her often dead eyes and vacant expressions not getting nearly enough from such a rich, expressive part.

Here are the twelve episodes spread over three Blu-ray discs in the season five package:

The program’s widescreen television aspect ratio of 1.78:1 is faithfully rendered in this 1080p transfer using the AVC codec. Picture quality while solid is at the mercy of atmospheric effects such as eccentric use of contrast, soft focus glamour photography for some of the performers, and occasional clotted black levels during some low light sequences. Color is sometimes bright and impressive, but many of the scenes inside the darkly lit hotel offer color that’s a bit oversaturated with orangey skin tones. The episodes have been divided into 7 chapters.

The DTS-HD Master Audio 5.1 sound mix works its effective spell throughout the run of the series though one may find that the rear channels aren’t used quite as imaginatively as the front soundstage in many of the shows. Mac Quayle’s background music plays a crucial part in several “boo” moments and is the most enveloping aspect of the sound design. Dialogue has been expertly recorded and is always clearly heard in the center channel. The LFE channel is used quite well to keep a low, rumbling bass going through various episodes to maximize tension.

An Invitation to Devil’s Night (11:39, HD): the episodes scheduled around Halloween are almost among the most highly anticipated of the season, and this featurette details information about episodes 4 and 5. Director Loni Peristere, costume designer Marisa Aboitiz, and actors Mare Winningham, Seth Gabel, Anthony Ruivivar, Lily Rabe, John Carroll Lynch, Darren Criss, and Jessica Lu all offer sound bites about the production of the episodes.

The Cortez: An Era of Elegance Gone By (7:35, HD): cinematographer Michael Goi, production designer Mark Worthington, costume designer Marisa Aboitiz, and actors Sarah Paulson, Matt Bomer, Kathy Bates, and Denis O’Hare discuss the heavily detailed Art Deco sets used for the lobby, bar, and the penthouse of the Countess along with details about how the hotel room sets were appointed so magnificently.

An average season of American Horror Story at best, Hotel does not generate the same macabre thrills that the first couple of seasons of the show offered, but with a magnificent production and many superb actors playing the increasingly soapy scenario, the fifth season is not without its pleasures. 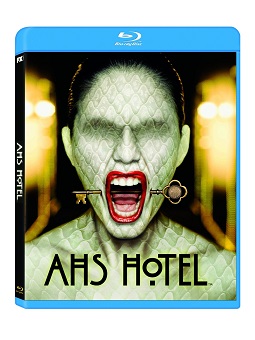