Posted on October 4, 2016 by Todd Erwin
Entertaining cross between "Jaws" and "Gravity" 4.5 Stars

Sharks have been getting a bad rap with the oddly successful Sharknado series of films (and the many other shark movies) that have appeared on SyFy over the last few years. Director Jaume Collet-Serra’s The Shallows is a refreshing thriller that takes it subject matter a bit more seriously, providing for a tense 85 minute ride.

Medical school dropout Nancy (Blake Lively) is on vacation in Mexico, looking for the secret, secluded beach her mother, who recently lost her battle with cancer, surfed before Nancy was born. Nancy finds it with the help of a local, Carlos (Oscar Jaenada), who drops her off in his truck. She prepares her surfboard, suits up, and while paddling out to sea, she meets two local surfers who tell her to be careful during low tide as one of the submerged rocks becomes an island and there is also some very sharp coral reefs nearby that sting like jellyfish. After a day of surfing, the locals head home as Nancy tries to catch one last wave. She encounters a whale carcass that has evidence of a violent attack, and as she catches that one last wave, she is knocked of her surf board by a large great white shark, who then takes a bite out of her leg. Nancy manages to get back on her surfboard and paddles to the whale, climbing on top hoping to elude the shark. The shark drives her off the whale, forcing her to swim to the small rock island that has appeared as the tide begins to go out to sea. Using the skills she learned in medical school, she tries to patch herself up as best she can using her wet suit, necklaces, and lead from her surfboard. As the sun sets, Nancy finds herself all alone on the island, with the exception of an injured seagull. Losing blood and becoming dehydrated, Nancy knows she needs to get back to shore, but she needs to elude the shark to survive.

Shark movies have been something of a dime a dozen on SyFy, thanks to Sharknado (and its three sequels), but there have also been Mega Shark vs. Giant Octopus, Ghost Shark, Dinoshark, Ice Sharks, and most recently, Planet of the Sharks. Let’s face it, the last really good shark movie was probably Steven Spielberg’s Jaws back in 1975. Is The Shallows as good as Jaws? Not even close, but it is head and shoulders above the SyFy dreck, and that is saying something. One thing it has going for it is that it doesn’t have its tongue planted firmly in its cheek. Granted, I do like a goofy, tongue in cheek horror film (Joe Dante’s Piranha quickly comes to mind), but when it comes to shark movies, it is nice to see a director wanting to go back to basics and make a straight up thriller. Director Jaume Collet-Serra (Orphan, Unknown) borrows a bit from Gravity, placing a mourning woman in peril who must fight for her life against all odds. Blake Lively pulls off a performance that successfully carries the movie through its very brief 86 minute running time. And this reviewer was engrossed in the story the entire time.

The Shallows was captured on the ARRI Alexa (with assistance from a Red Epic Dragon and a GoPro Hero 4), mostly in 3.4k resolution, and completed as a 2K digital intermediate. You would never know it after watching this 4K UHD Blu-ray. As good as the movie looked on Blu-ray, colors are much more natural and vibrant with the wider color gamut of UHD and especially after HDR was applied. Contrast and detail are also improved upon, most noticeably in many of the longer vista shots of the ocean. This is one of the best upscaled UHD releases so far in the format.

The UHD receives an audio upgrade with a Dolby Atmos mix that contains a Dolby TrueHD 7.1 core (the Blu-ray has a DTS-HD 5.1 mix). This is a very immersive mix, even when played back in a 5.1 configuration with front height speakers and Pro-Logic IIz enabled. Heights are used to great effect during underwater sequences. Dialogue is clear and understandable throughout, directed mostly to the center channel although some panning effects are employed where necessary. Marco Beltrami’s score is spread across all channels, providing even more immersion for the viewer.

The 4K UHD Blu-ray contains no special features whatsoever (I have begun to discount Sony’s “moments” page, which is just clips from the film, as a bonus feature), while the special features can be found on the included Blu-ray version.

Deleted Scenes (1080p; 5:01): Three scenes (the first two are extensions) are included, Chloe Sees the Shark, Call for Help, and A Conversation with Seagull.

Shooting in the Shallows (1080p; 5:57): An overview on the making of the movie, including trying to shoot on water and Blake Lively’s preparations for her role.

When Sharks Attack (1080p; 7:34): A look at possible reasons why sharks attack humans, including a conversation with a shark attack survivor.

Finding the Perfect Beach: Lord Howe Island (1080p; 6:01): The filmmakers discuss trying to find a beach in Australia that looked untouched and could exist in Latin America, settling on Lord Howe Island, a small island several hours by plane from mainland.

Digital HD Copy: An insert contains a code to redeem a digital copy through Ultraviolet. Those with 4K Sony TVs can get a 4K streaming version if redeemed through the URL on the insert.

The Shallows is a fun, thrilling ride, combining elements of both Jaws and Gravity. The video and audio on this release are near-reference quality for UHD, a noticeable improvement over the Blu-ray edition. 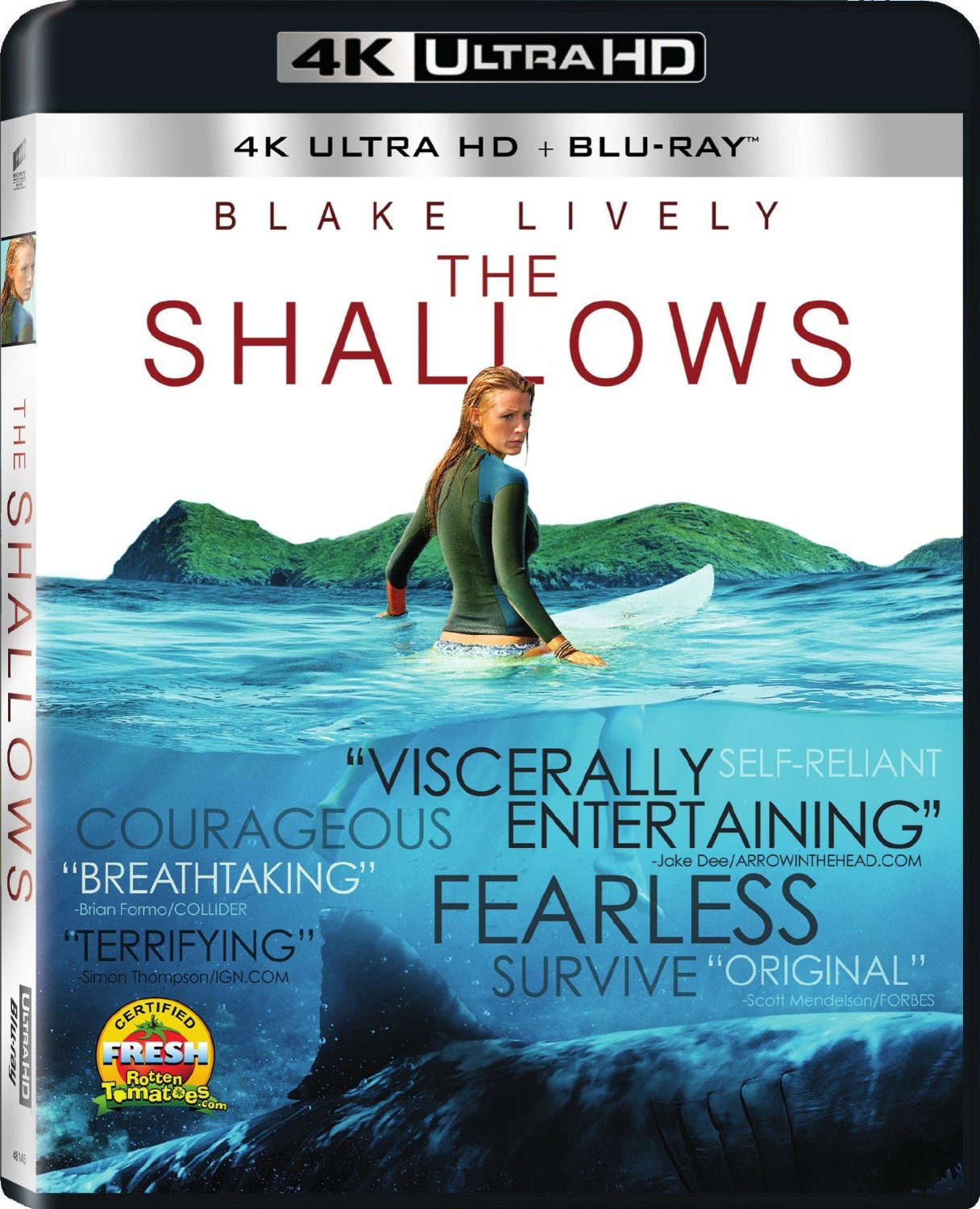