It is interesting how two very similar movies can be released at the same time from different studios. Such was the case with Central Intelligence, which had the misfortune (or possibly fortune) to come on the heels of Netflix’s The Do-Over. Both films share not only the same basic plot (two “friends” meet at a high school reunion, one a federal agent who tricks the other who has easy access to financial information and go on an “adventure”), but even the same high school name (Central High School). Central Intelligence is the better film, but not by much.

Twenty years ago, Robbie Weirdicht (Dwayne Johnson) was humiliated by bullies during an all-school assembly, being tossed completely naked out on to the gym floor. All-star and Most Likely To Succeed student Calvin Joyner (Kevin Hart), feeling sorry for Robbie, gives him his all-star jacket to cover himself so he can escape with some modesty and dignity. Cut to present day, and Calvin is a forensic accountant at a firm that has once again looked him over for promotion, making the youngest accountant at the firm its new partner. With his 20-year high school reunion coming up, Calvin is disappointed in himself, feeling like he has not lived up to his potential, despite being married to his high school sweetheart, Maggie (Danielle Nicolet), who is very happy in her job as a lawyer. When Calvin accepts a friend request on Facebook from Bob Stone, who turns out to be Robbie, now 200 pounds lighter and a good foot taller, his life is turned upside down and inside out as Bob/Robbie turns out to be a rogue CIA agent trying to track down the Black Badger, who has stolen encryption keys to our satellites and is about to sell them to the highest bidder. Hot on their trail are a team of CIA agents led by Agent Pamela Harris (Amy Ryan), who thinks Bob/Robbie is the Black Badger.

As an action/comedy, Central Intelligence works, for the most part, thanks to its talented cast, especially Dwayne Johnson, who plays his character with the vulnerability and life-long pain of being bullied as an adolescent, while still bringing a goofy child-like charm that taps into Johnson’s comedic abilities. Kevin Hart is possibly the weakest link here, but only because this reviewer just doesn’t find his style of humor even remotely funny. There are some good action sequences, but nothing really memorable or original, and there are a few funny moments in the film as well. The 4K UHD disc includes both the PG-13 rated theatrical and unrated cuts (with 8 minutes of additional material) of the film.

Central Intelligence was captured on the ARRI Alexa XT at 2.8K, and completed as a 2K digital intermediate. One has to wonder why Warner has released the film on 4K UHD Blu-ray, as the differences compared to the 1080p Blu-ray are minimal. Fine detail is slightly improved, with beard stubble and threadbare fabrics a bit more noticeable. Colors, while a bit more natural, are about as vibrant as the Blu-ray counterpart. Contrast is also about the same, with blacks not all that much deeper, either. Most viewers will be perfectly happy with the Blu-ray edition.

Although released theatrically with a 7.1 sound mix, both the 4K UHD and 1080p Blu-ray share the same DTS-HD Master Audio 5.1 mixes. That is not a typo – the discs contain only a 5.1 mix. While dialogue is clear and understandable throughout, never getting drowned out by gunfire, music, and explosions, the mix frequently defaults to a front-heavy comedy mix with some occasional surround and LFE activity during some of the action sequences.

Central Intelligence is a serviceable action comedy, heightened by Dwayne Johnson’s comedic performance. The 4K UHD offers marginally improved video, even with HDR, so most viewers will likely be more than happy with the 1080p Blu-ray edition. 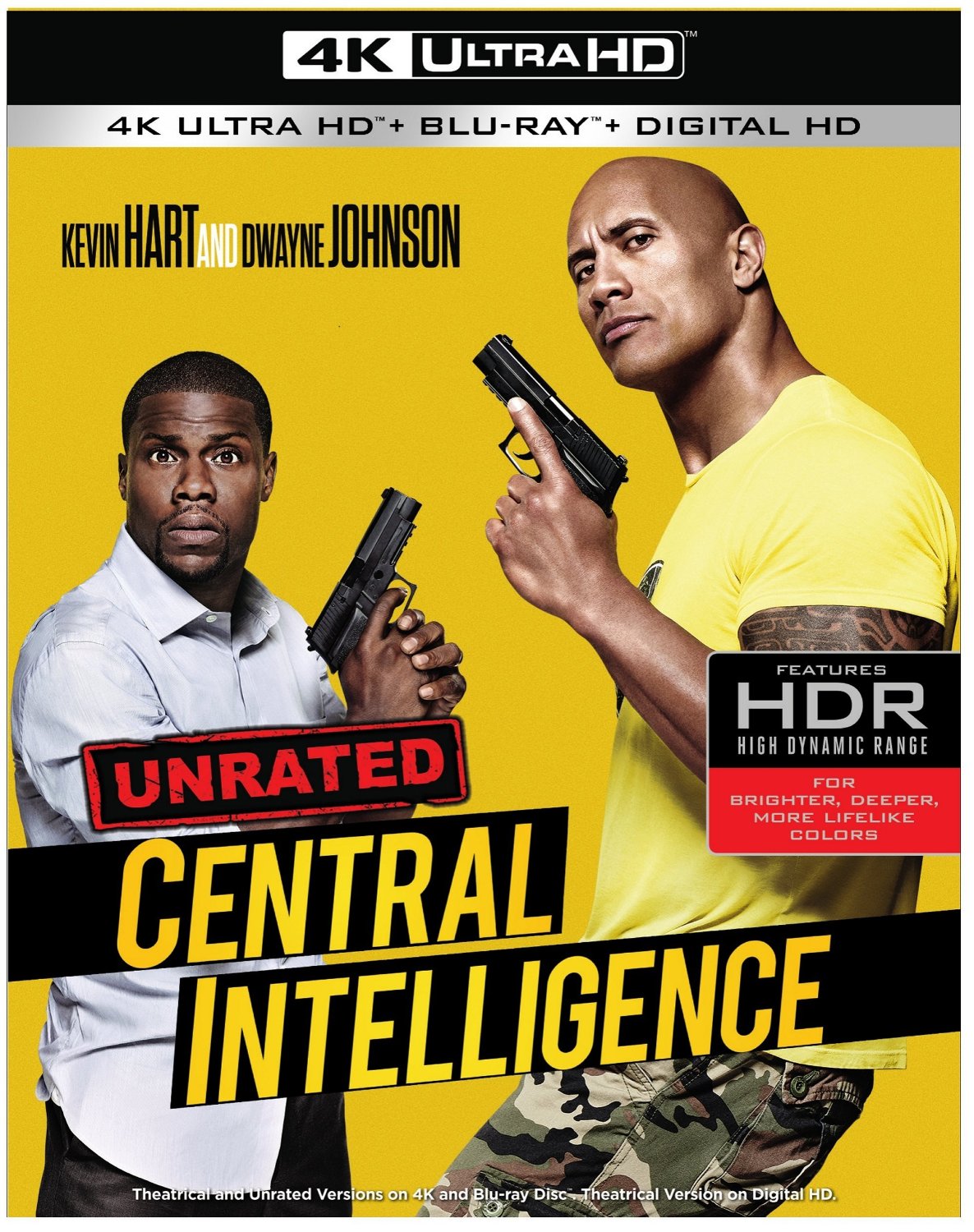