Forum List What's new Dark Style Change width
Log in Register
What's new Search
Menu
Log in
Register
Navigation
Install the app
More options
Dark Style
Close Menu
Posted on October 15, 2018 by Robert Harris
You are using an out of date browser. It may not display this or other websites correctly.
You should upgrade or use an alternative browser.

Never had the desire to do so.

Even though Mr. McKay is obviously a talented filmmaker.

But it arrives on 4k courtesy of Sony, and my son suggested that it’s such a totally awful film – a disaster – that I might just actually enjoy it.

What’s doubly troubling, is that this was shot on film (S35), and finalized as a 2k DI, which also means that there may be digital separation masters on the title.

Which means there may be no way of losing it.

It’s not all negative.

The film did win an award, and was nominated for another.

The win was for ASCAP Top Box Office Films (Jon Brion), and the nomination was Best Grownup Love Story, by the AARP Movies for Grownups Awards.

As a 4k Blu-ray, it’s quite lovely. Up-rezzed nicely, with Dolby Atmos.

I thought this film was hilarious.

Tino said:
I thought this film was hilarious.

Never had the desire to do so.

Even though Mr. McKay is obviously a talented filmmaker.

But it arrives on 4k courtesy of Sony, and my son suggested that it's such a totally awful film - a disaster - that I might just actually enjoy it. "Are you saying Pan?"

"You don't know anyone named Johnny Hopkins"
" It was Johnny Hopkins, and Sloan Kettering. And they were blazin' that s**t up every day.

I always get a good laugh watching this movie.

RAH, I hope you go back to your regular point size in your A few words about...
The senior set has trouble reading such a small point size.
EDIT: HOOK is back to normal point size!

The first three times I saw this movie I saw three different versions. I first attended a test screening, then on release I saw the theatrical cut, then the extended cut on the first video release. I found it funny every time and I still quote it quite a bit.

"So much more room for activities!"

I'm 48, and I find this movie fucking hysterical. It gets quoted regularly around my house.

"You have the voice of an angel. Your voice is like a combination of Fergie and Jesus."

My home wi-fi network used to be called "Prestige Worldwide".

I rented this movie from Blockbuster about 10 years ago and was surprised by how funny and terrific it was. I seem to recall the reviews being quite poor. I haven't seen it since. I popped in the 4K disc last week and just skipped through the chapters a bit to sample the disc. Laughed out loud at a few of the moments I caught. Hopefully I'll get to watch it again by the end of the weekend. Been watching a lot of horror lately. Should be a nice break.

Ray H said:
I rented this movie from Blockbuster about 10 years ago and was surprised by how funny and terrific it was. I seem to recall the reviews being quite poor.
Click to expand...

I loved it. Ferrell/Reilly are pretty much money in the bank together...
W

If you don’t like this movie, I will stab you in the neck with a knife!

It's alright not to like this movie but this is the one rule of the house: Don't ever, ever, ever... touch my drumset. You understand? DON'T TOUCH IT! I was at about six there, you don't want to see me go to ten.

I think this scene acts as a "SB" litmus test. Some will love it, some will loathe it!

Sticks and stones will break my bones but I’m going to punch you repeatedly in the balls, Harris.

I don't know if it's worth the upgrade to 4k, but it is a pretty hilarious film. My wife and I quote it quite frequently...

I still love the little song written when the family starts falling apart... It sounds like a real 1960's era country song.

"Who gets the family Bible..." I think Adam McKay wrote the song.

A Few Words About A few words about...™ Star Wars: The Rise of Skywalker -- in 4k UHD Blu-ray
2 3 Tags 4k a few words about blu-ray disney star wars uhd

A Few Words About A few words about...™ Mortal Engines -- in 4k UHD Blu-ray 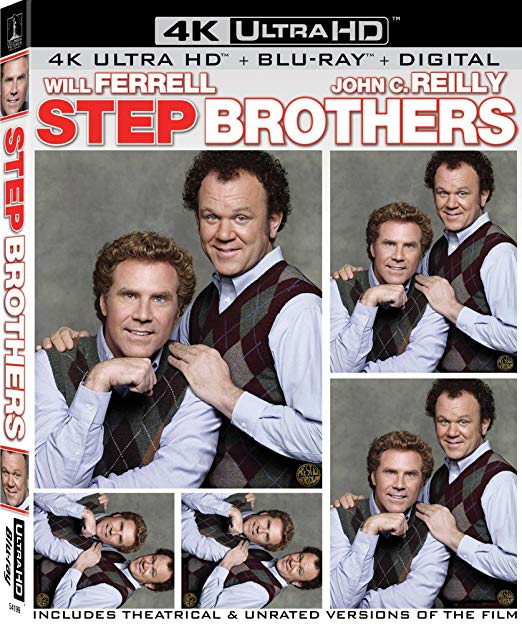