Sony has released Step Brothers on 4K UHD Blu-ray to commemorate its 10th anniversary, but more likely as a tie-in to the upcoming Holmes & Watson hitting theatres this Christmas.

When two divorced single parents (Mary Steenburgen and Richard Jenkins) get married to one another, their 40-something sons move in with them (Will Ferrell and John C. Reilly), with the two Step Brothers now sharing a room. Hilarity ensues, or not.

I have a love-hate relationship with the works of Will Ferrell. He’s a very talented and sometimes funny guy, particularly when he’s acting in someone else’s material. Some of my favorite performances of his are in Megamind, Elf, The LEGO Movie, and in a stretch, even Jay and Silent Bob Strike Back, The Producers, and his stabs at more serious roles in Everything Must Go and Stranger Than Fiction. When he works from his own material (or material he had a very active role in developing), I tend to find this man-child very annoying in films like Talladega Nights, Anchorman, and Daddy’s Home.

Step Brothers falls into that latter category, despite the very talented cast, as I usually find John C. Reilly very humorous and enjoyable in just about anything he does. Watching two grown men act like spoiled children, pushing the boundaries of their new parent and sibling, saying some of the most obnoxious and obscene phrases to one another, eventually becoming friends and growing up (as it were) for over 90 minutes was exhausting, not from laughing so hard, but from not laughing at all. Not one moment was even remotely funny to me. I know others have called this a “comedy classic,” but comedy is often in the eye of the beholder. To each his/her own, I guess. Both the R-rated theatrical and unrated extended cuts of the film are available on both the UHD and Blu-ray discs.

Sony has brought Step Brothers to 4K UHD Blu-ray in a new 2160p HEVC-encoded transfer with HDR10 that retains the film’s theatrical aspect ratio of 2.39:1. The results are an improvement over the now 10-year old 1080p transfer that appears on the included original Blu-ray release. Yes, details are much more defined, colors are more natural, and contrast is greatly improved with deeper blacks. But Step Brothers was a fairly standard-looking film to begin with, nothing really flashy or aesthetically exciting, so Step Brothers is probably not a movie most home theater enthusiasts are going to go to in showing off their display.

As with nearly every UHD Blu-ray release from Sony, Step Brothers has been remixed in Dolby Atmos. The new mix is slightly wider and there is a slightly more natural blending of the various speaker channels than what could be heard on the previous DTS-HD Master Audio 5.1 track (which has been included on the UHD disc).

With the exception of including both cuts of the film, the UHD disc has no special features whatsoever. Those can be found on the 2-disc original Blu-ray release that is included in the package.

The Making of Step Brothers

The Music of Step Brothers

For die-hard fans of Step Brothers, now is the chance to slightly upgrade the video and audio presentation of this “classic comedy.” 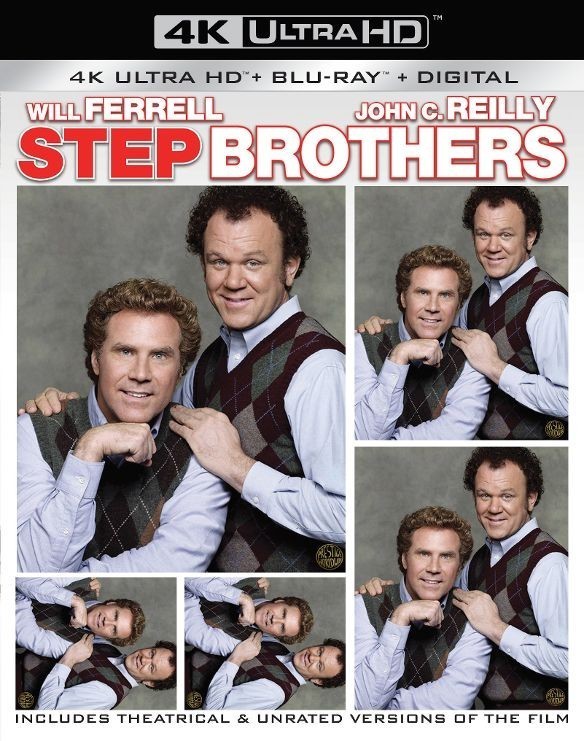