Forum List What's new Dark Style Change width
Log in Register
What's new Search
Menu
Log in
Register
Navigation
Install the app
More options
Dark Style
Close Menu
Posted on June 30, 2017 by Matt Hough
You are using an out of date browser. It may not display this or other websites correctly.
You should upgrade or use an alternative browser.
Absorbing real life Holocaust story 4 Stars

A beautifully told and spiritually uplifting Holocaust story, Niki Caro’s The Zookeeper’s Wife tells a little known true story of resistance fighting during the six years of World War II in Poland buoyed by wonderful performances and an engrossing human interest tale of survival. Offering a kind of parallel narrative of efforts to save Jews from the Warsaw Ghetto that inevitably marked Steven Spielberg’s Schindler’s List as something special, The Zookeeper’s Wife isn’t as complex or as artistic in its ambitions and results, but it’s a nonetheless captivating story that needs to be better known.

The time is 1939, and the place is Warsaw, Poland, homeland of Antonina Zabinska (Jessica Chastain) and her husband Dr. Jan Zabinski (Johan Heldenbergh). The Warsaw Zoo flourishes under Jan’s stewardship and Antonina’s care, but when their country is invaded by the Nazis, Jan and Antonina are forced to report to the Reich’s newly appointed chief zoologist Lutz Heck (Daniel Brühl) who has his own ideas about what to do with the Warsaw Zoo. Once they realize the evils being perpetrated on their Jewish friends and neighbors first being rounded up and dumped in a ghetto and then later being transported out of the country, the Zabinskis covertly begin working with the Resistance and put into action plans to save the lives of hundreds from what has become the Warsaw Ghetto by using the Zoo’s underground cages and tunnels to hide Jews until they can be transported to safe houses.

Based on the 2007 best seller by Diane Ackerman, Angela Workman’s screenplay does its due diligence in helping us to see the inherent decency in the Zabinskis long before they take on the task of hiding hundreds of Jewish men, women, and children from their Nazi oppressors. The script is very workmanlike in showing us the daily routine at the zoo both pre and post Nazi occupation though character development is a bit sketchy with the three principals in a kind of triangle dance of the two men for the lady’s favor, even though she’s clearly in love with her husband and only gets close to Heck for the protection of the zoo and its secret inhabitants: a tedious jealousy angle seems rather a waste of time when it might have been given to fleshing out the personalities of some of the more endearing of the Jewish refugees. In that regard, we do enjoy watching the flowering of rape victim Magda Gross (Efrat Dor), and the script might have given us more about a loving Jewish couple Maurycy Fraenkel (Iddo Goldberg) and his wife (Shira Haas) and the Zoo’s caretaker Jerzyk (Michael McElhatton), all of whom are around for key moments in the drama without revealing much about their participation in it. Director Niki Caro does exceptionally well showing us early on the day-to-day idyll of zoo life, and moments of tension later on when discovery seems imminent are sustained well enough, too, even though the film’s final quarter hour speeds through highlights of the remainder of the story without much dramatization.

It’s another great role for Jessica Chastain who tries her hand at a Polish dialect (she’s no Meryl Streep, but then, who is?) but is more successful conveying the sense of love, duty, and loyalty that Antonina Zabinska showed quite admirably. Johan Heldenbergh shoulders quite a bit of the dramatic burden out in the field as he covertly rounds up Jews to take to (hopefully) safety. Daniel Brühl’s starchy Lutz Heck never finds the actor deeply comfortable in his role, and when he turns ruthless late in the film, it seems like a stretch for the actor that he doesn’t quite manage. Timothy Radford and Val Maloku play younger and older versions of the Zabinski’s oldest child Ryszard with the former a bit more adorably in character than the latter. Efrat Dor gives a great performance as the damaged and mistrustful Magda Gross, and Iddo Goldberg, Shira Haas, and Michael McElhatton are all very fine in their supporting roles.

The film’s 2.40:1 theatrical aspect ratio is faithfully rendered in a 1080p transfer using the AVC codec. It’s a beautiful transfer in all respects from outstanding sharpness to wonderfully modulated color from happy times in the early going to more sedate hues later on when things turn ugly. Contrast has been consistently applied for a first-rate visual experience. Black levels are excellent with exceptional shadow detail (seen clearly in a tense sequence with a newly born elephant in the first part of the movie). The film has been divided into 20 chapters.

The DTS-HD Master Audio 5.1 sound mix offers the beautiful and inspiring music by Harry Gregson-Williams in full surround mode with atmospheric effects also being craftily filtered through the fronts and rears (and some impressive bass when Nazi planes and troops move into Poland). Dialogue has been excellently recorded and has been placed in the center channel.

Deleted Scenes (3:57, HD): six scenes may be viewed individually or in montage.

The Zabinski Family (3:57, HD): the real life children of the Zabinskis, Teresa and Ryszard, speak of their parents and their celebrated efforts. Also praising their courage and sacrifice are original author Diane Ackerman, director Niki Caro, screenwriter Angela Workman, and stars Jessica Chastain and Johan Heldenbergh.

Promo Trailers (HD): The Book of Henry, The Ottoman Lieutenant.

Somewhat conventional in its telling but nevertheless inspiring and absorbing, The Zookeeper’s Wife is a wonderfully watchable Holocaust story. The Blu-ray offers exceptional picture and sound quality for a very satisfying home theater experience. Recommended!

This is my lone July 4th purchase. Pre-ordered a while ago from Amazon. Hoping that they'll arrange a holiday delivery to me (actually, I'm expecting so..so I'll be disappointed if they don't).

Really looking forward to this. It's a blind buy but what I've gleaned of the story sounds fascinating.

I really enjoyed it, and not being familiar with the true story, I was edgy throughout the presentation.

Matt Hough said:
I really enjoyed it, and not being familiar with the true story, I was edgy throughout the presentation.

Jessica Chastain is my favorite actress going today so I'll definitely buy it some time this year when it's discounted down further.

What a powerful film.

It is a great reminder of the way film can smack us upside the head about our history and, more importantly, the importance of the decisions we make as individuals and how those decisions make a difference (action/inaction, positive/negative). It really puts front and center the need for us to do right even when surrounded by evil.

Robert: Chastain was really, really good in this.
You must log in or register to reply here. 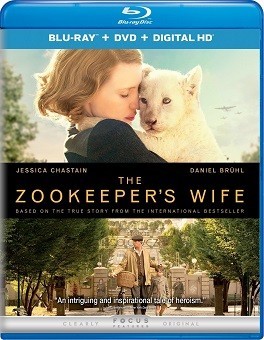