Forum List What's new Dark Style Change width
Log in Register
What's new Search
Menu
Log in
Register
Navigation
Install the app
More options
Dark Style
Close Menu
Posted on June 29, 2017 by Matt Hough
You are using an out of date browser. It may not display this or other websites correctly.
You should upgrade or use an alternative browser.
Entertaining enough Bob Hope comedy 3.5 Stars

Sidney Lanfield’s The Lemon Drop Kid based on a Damon Runyon short story might not quite reach the sentimentally seedy Broadway atmosphere of the best 1930s filmed Runyon tales, but it offers a top flight cast, some catchy tunes including one that went on to be a Christmas classic, and a top studio production that serves its gals and grifters story nicely.

After Guys and Dolls became the sensation of Broadway in 1950, the stories of Damon Runyon became hot properties once again. Sidney Lanfield’s The Lemon Drop Kid based on a Runyon short story might not quite reach the sentimentally seedy Broadway atmosphere of the best 1930s filmed Runyon tales, but it offers a top flight cast, some catchy tunes including one that went on to become a Christmas classic, and a top studio production that serves its gals and grifters story nicely.

When Miami racetrack tout Sidney Milburn aka The Lemon Drop Kid (Bob Hope) accidentally manages to cost noted mobster Moose Moran (Fred Clark) $10,000 in winnings, the gangster gives the Kid until Christmas Eve to pay him what he owes. The Kid heads to New York, but all of his usual sources for loans like newspaper hawker Nellie Thursday (Jane Darwell), showgirl Brainey Baxter (Marilyn Maxwell), and assorted Broadway con men like Straight Flush Tony (Jay C. Flippen) and Gloomy Willie (William Frawley) are all tapped out. So, when the Kid sees Santas on every street corner collecting for various charities, the Kid gets the idea to start his own charity, a home for elderly Broadway dolls like Nellie, and collect holiday money for them and keep it for himself. When the idea starts to pay off with big daily hauls, local mobster Oxford Charlie (Lloyd Nolan) decides to move in on the con leaving the Kid high and dry with Christmas Eve approaching.

The Damon Runyon story has been adapted for the screen by Edmund Hartmann, Robert O’Brien, Frank Tashlin, and Irving Elinson, and while it might not have the charm and gut-wrenching sentiment of previous Runyon-inspired stories like Lady for a Day (which was remade as Pocketful of Miracles) or Little Miss Marker (remade several times), it’s a serviceable story that offers opportunities for some big laughs. While Bob Hope gets to run through his litany of jokes touching on politics, television, and Bing Crosby (none of them remotely Runyonesque), we still get to see assorted hoods and Broadway types in their element, and we get to enjoy three song numbers (even though this isn’t strictly a musical), all written by Paramount’s in-house Oscar-winning songwriting team of Jay Livingston and Ray Evans: “Think” with Marilyn Maxwell and her fellow showgirls, the duet “It Doesn’t Cost a Dime to Dream” with Maxwell and Bob Hope, and the film’s most famous song (although shockingly not Oscar nominated) and the real reason the movie is still remembered today, “Silver Bells” which begins with William Frawley starting the tune but continues as a duet for the two stars and then becomes a full production number on the Paramount backlot with scores of extras bringing it home for the holidays (even Hope’s obvious gaffe forgetting to lip synch at one point while the playback runs on doesn’t ruin it). Director Sidney Lanfield takes the opportunity with “Silver Bells” to really show what he could do with staging and shooting a big number, but he also handles smaller moments astutely: some silly antics with Hope fighting gale force winds and primping before a mirror before reuniting with Maxwell, and some sight gags involving automated casino equipment.

Bob Hope plays his usual affable con man without any Runyon touches. He gets to sing, do some physical comedy, and don unconvincing drag for his final caper, and is successful enough at all of it to carry the picture. Marilyn Maxwell with her smashing looks and fine singing voice again does well opposite Bob Hope even with her reduced screen time here. Fred Clark and Lloyd Nolan are merely adequate hoodlums, but William Frawley, Jay C. Flippen, Sid Melton, Ben Welden, even wrestler Tor Johnson add crucial ambiance to the Broadway scene with their singular personalities.  Jane Darwell isn’t quiet the tough-minded but sentimental sweetie one might have expected in the part, but she’s abetted by fine work from Ida Moore as another of the ladies being put up for the winter in the charity con game.

The film’s original aspect ratio of 1.37:1 is ably reproduced in this 1080p transfer using the AVC codec. Though much of the transfer features a film-like quality of fine grain, there are a few early Florida-set scenes that seem heavily DNRed and don’t match well with the scenes before or after them. Of course there are some scratches and some softness in the vault footage used for racetrack moments and New York blizzard setting, but apart from a little speck here and there, the principal photography seems remarkably clean and artifact free. Grayscale is very good indeed with excellent white levels and sterling blacks. Contrast has been applied consistently for a high quality image. The movie has been divided into 8 chapters.

The DTS-HD Master Audio 2.0 mono sound mix features nicely recorded dialogue mixed expertly with Victor Young’s background score and the Livingstone/Evans songs and the atmospheric effects needed to set scenes in both Florida and New York. There are no problems with age-related artifacts like hiss, flutter, or crackle.

While not reeking of Damon Runyon flavor, The Lemon Drop Kid is a more than acceptable Bob Hope comedy vehicle from 1951, a big enough hit to land the star at number six at the box office for the year. The video quality on Kino’s Blu-ray is superior to any previously seen tape, disc, or TCM broadcast of this movie, and for fans of Bob Hope or the film, you’ll likely be very pleased with what’s here. 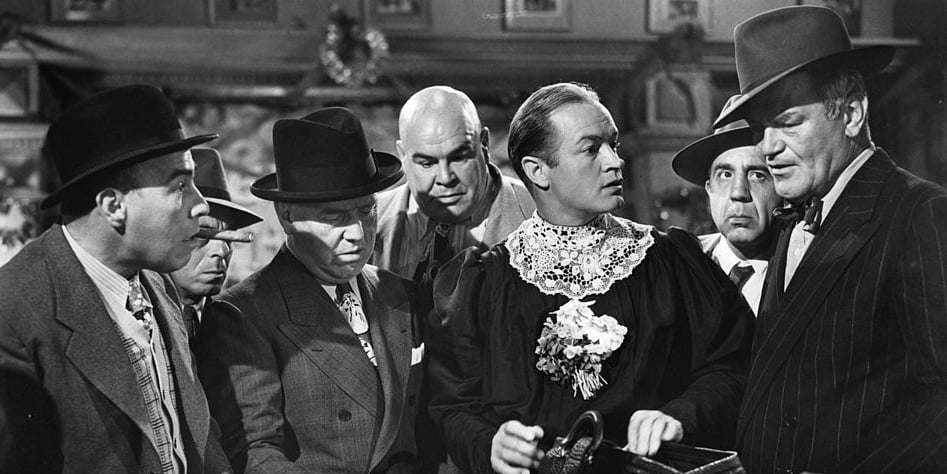 Sidney Lanfield’s The Lemon Drop Kid based on a Damon Runyon short story might not quite reach the sentimentally seedy Broadway atmosphere of the best 1930s filmed Runyon tales, but it offers a top flight cast, some catchy tunes including one that went on to be a Christmas classic, and a top studio production that serves its gals and grifters story nicely.

Thanks for the review -

It's the cinematic source for the the Hanukah song "Silver Bells" ...
I (pre-)ordered this & some of the other Bob Hope blurays from Kino from deepdiscount as they have a sale going on ...

Thanks, Matt! I was going to order all the Hope Kino titles until Kino confirmed they were not including English Subtitles for any of them. Very disappointing as they earlier had said all titles released in 2017 would include them. With all the late night viewing I do, they are a must.
You must log in or register to reply here. 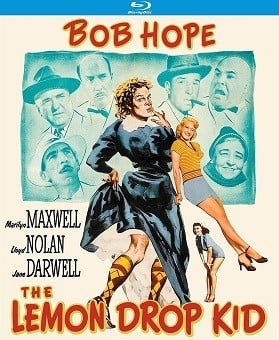