Forum List What's new Dark Style Change width
Log in Register
What's new Search
Menu
Log in
Register
Navigation
Install the app
More options
Dark Style
Close Menu
Posted on August 8, 2019 by Timothy Bodzioney
You are using an out of date browser. It may not display this or other websites correctly.
You should upgrade or use an alternative browser.
Recommended for Japanese genre fans 3.5 Stars

In a series of ongoing releases of the films of director Teruo Ishii, Arrow films has released his 1969 crime anthology film Yakuza Law (also known as Yakuza’s Law: Lynching) on blu ray.  Because Yakuza Law is more or less a straight gangster film (other than its multi-story format), it is not as thematically daring or outrageous as Ishi’s Horrors of Malformed Men.  While there is little sex, Ishii does pile on the violence in levels impossible to conceive of in an American film of the era.

Yakuza Law is an interesting, but not great genre film.  Plot and action-wise the movie isn’t too different than other Japanese gangster films I’ve seen of the era, other than the then-new emphasis on intense violence.  It’s part of a cycle of Japanese torture films.  Yakuza Law is a three-story anthology film about the consequences of breaking the Yakuza code which two major precepts are: do not steal and do not sleep with a married woman. Those rules are covered in stories one and three.  The second story deals with the theme of bringing shame to ‘the family.’

In traditional Japanese gangster films, morality reflects that of society in general – the ‘soldiers’ must adhere to the rules and whims of the bosses.  It is assumed that the bosses operate with the best intentions of those under him.  The bosses are usually portrayed as wise and sympathetic.

Japanese movie box office was not affected by television as quickly as the US was.  It wasn’t until the mid-1960s that Japanese movie attendance began to plummet.  Studios underwent management changes with younger, more liberal producers hired.  These changes also reflect the social changes of the era.  More sex and violence are introduced to lure viewers away from their television sets.

The gangster films too, start reflecting societal shifts in the 60s.  Heroes as in films like the Outlaw Gangster VIP films break away from the gangs, answering to their own codes or what they believe is right.  The bosses in these films start appearing cowardly, hypocritical, and petty.  The order breaks down.

In Yakuza Law it’s almost as if you see how the breakdown of these rules and the ever-increasing paranoid and arbitrary behavior of the bosses leads to eventual anarchy within the groups.  In the first story, the transgressions of Tsune seem to be an isolated illness until it affects the actions of his friend and higher up Tomozo, who breaking the Yakuza code defends his friend, literally giving an eye for an eye.

In the second story, Ogata is released from prison where he finds nobody from his gang waiting for him.  He has been abandoned by his former gang and expected to go away quietly.  But Ogata is too individualistic to do this and seeks retribution at any cost, even if it entails breaking traditional codes.

The third, and modern-day episode is the most daring thematically and stylistically and it’s every man and woman for him or herself, each trying to outwit those around him to gain the stolen gold.  Order has broken down and chaos reigns.  This perhaps is meant to be a critique of post-war Japan?  The third story features the only non-submissive female character in the movie; she uses sex as her weapon and is no less sadistic than the men surrounding her.

The violence in Yakuza Law is intentionally unsettling.  As I stated above, outside of splatter movies, which were not distributed by any of the major studios, I can’t think of anything similar in American movies of the era.  Punishment is handed out barbarically and with sadistic glee.  I have to confess that the older I get, the more squeamish I get about graphic violence.  The opening credits had me worried as it is a montage of torture and plays like a coming attraction of a movie targeted for the Marquis DeSade.  Fortunately, much of what is seen over the opening credits is not in the movie.  If the motive of this montage is to hook the viewer, that seems weird because you’ve already paid your admission and are watching.  It is 1969 so the special effects and makeup while better than a Herschell Gordon Lewis movie are still primitive and not terribly believable.  I think the violence would be more powerful if the depiction wasn’t as explicit and Ichii either cut away or employed obscured camera angles thereby letting the imagination of the viewer cover for the crude effects.

Arrow’s transfer is in the original aspect ratio of 2.351.  The liner notes only say that the film was remastered in high definition by Toei Studios.  The transfer looks very good with strong colors and good contrast as there are lots of scenes filmed at night or taking place in shadows.  It’s a clean transfer with little in the way of specks, scratches or blemishes.

The 1.0 PCM lossless audio is presented in Japanese in the original mono.  It sounds fine with no distortion and dialogue and music clear sounding.

A new audio commentary by author and critic Jasper Sharp which is informative with plenty of information about Ishii and the actors.  Sharp gives a good deal of cultural context as well.  One head-scratcher that Sharp tosses out is that he believes that the Japanese ‘torture’ genre was inspired by Michael Reeve’s 1968 Witchfinder General, but then states that the movie didn’t play theatrically in Japan at the time?

Erotic-Grotesque and Genre Hopping: Terou Ishii Speaks.  This is a newly edited piece from the early 2000s that was recorded while Ishii attended a retrospective of his work.  Ishii is a showman and a flamboyant one at that.  He tells lots of stories about the Japanese film industry of the 1950s through the 1970s.  He comes off as a bit of a rascal when he says he was nothing more than a hired hand trying to make entertaining commercial movies.

A booklet with an essay by Tom Mes entitled The Long Harm of the Law.

I won’t say that I was disappointed by Yakuza Law, but it is certainly not as outrageous or mysterious as Ishii’s Horrors of Malformed Men, which is a work of real originality.  Yakuza Law is certainly of interest to anyone interested in Japanese gangster movies, or Japanese torture films, though I confess that I don’t understand the entertainment value of the later genre. 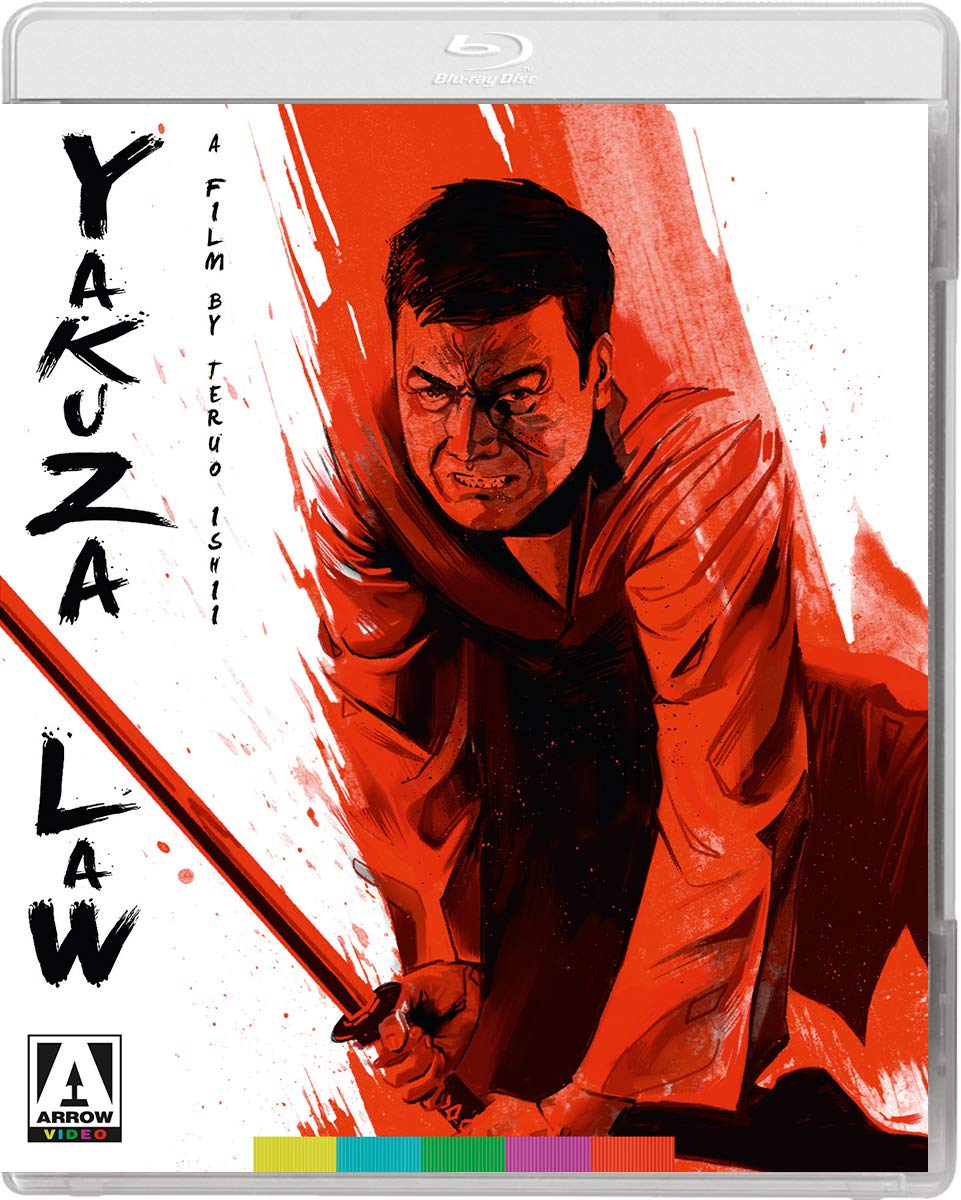