The animated feature UglyDolls is a movie that, like the characters themselves, wants so desperately to be loved that it often tries too hard driving its positive message home.

If you’ve ever wondered what happens to defective toys after they leave the factory floor, apparently instead of ending up at the Island of Misfit Toys, they are dumped into Uglyville to live out a lonely life with all the other UglyDolls. Moxy (Kelly Clarkson) is one such ugly doll, but has a very positive attitude, believing that somehow, someway, somewhere there is a child that will want her and love her. Mayor Ox (Blake Shelton), while trying to keep the town positive, tells Moxy that there is no other world outside of Uglyville, and that her dreams are just that, dreams. Her best friend, Lucky Bat (Leehom Wang), unwittingly offers her advice to believe her own truth, believe in herself, and leave Uglyville. Determined as ever, Moxy sets out with her friends Lucky Bat, Babo (Gabriel Iglesias), Uglydog (rap artist Pitbull), and Wage (Wanda Sykes) on an adventure through the mysterious tunnels above the town that new dolls arrive from. They soon discover that the tunnel leads to the Institute of Perfection, a training ground for dolls before they are sent out to the Big World. Perfection is run by Lou (Nick Jonas), who has a particular hatefulness and cruel streak towards anything less than perfect, and will stop at nothing to be rid of Moxy and her pals. Lou assigns trainee Mandy (Janelle Monáe) to show them around Perfection and help them train for the Gauntlet, a final obstacle course simulating the Big World that determines which dolls graduate.

It’s very obvious from the start that UglyDolls wants to convey to its audience that it is okay to be individualistic and different from everyone else, but the movie pushes that message ad nauseum for its entire 88 minute running time. The Ugly Dolls are not really ugly, they are actually kind of cute (my wife found Moxy to be overly cute for a stuffed doll), so acceopting the idea of them being, well, ugly, is difficult to swallow. This is a musical, and while the songs are kind of fun to listen to within the context of the film, they aren’t all that memorable. The animation is quite good and better than I had anticipated, considering this was mostly farmed out to studios in China. Younger kids will likely enjoy this film much more than the post-tween set. My wife and I viewed this film with our friend’s ten-year old, who was excited to watch at first, but began to grow bored and lose interest during the last third.

UglyDolls is a very colorful movie, and its transfer to Blu-ray is, well, an example of perfection. I saw no evidence of banding or other compression artifacts. Detail is excellent, with minute hairs in the furs of Moxy and her pals clearly visible not only in close-ups but mid and long shots as well. Contrast is also excellent, with deep blacks that have no evidence of crushing and bright whites that don’t bloom.

The disc’s DTS-HD MA 7.1 track compliments the musical aspects of the film nicely, immersing the viewer in its pop music-style tracks. Surrounds are used effectively with things like crowd noises, atmospherics, etc. LFE is strong, giving the songs an extra low-end. Dialogue, even during the musical numbers, is clear and understandable throughout.

I really wish STX would provide some real special features rather than their typical short EPK trailers found on nearly all of their releases.

Making “UglyDolls” (1080p; 4:59): Playable as one 5-minute piece or as five individual segments – BTS Countdown, Couldn’t Be Better, Broken and Beautiful, The Ugly Truth, and Pitbull.

Fun with the Cast of “UglyDolls” (1080p; 4:43): Playable as one just under 5-minute piece or as five individual segments, with very the movie’s voice cast answering various questions – Would You Rather, Cast Talents, Kelly’s Gifts, Kelly’s Reaction, and Ready, Set, Draw.

DVD Copy: The movie in 480p with Dolby Digital 5.1 audio, plus all of the above-listed special features except the Sing-Along version.

Digital Copy: An insert contains a code to redeem a digital copy in iTunes. My code redeemed as 4K with HDR10 and Dolby Atmos audio.

The presentation is beautiful, but UglyDolls is a rather bland story that tries too hard to deliver its positive message. 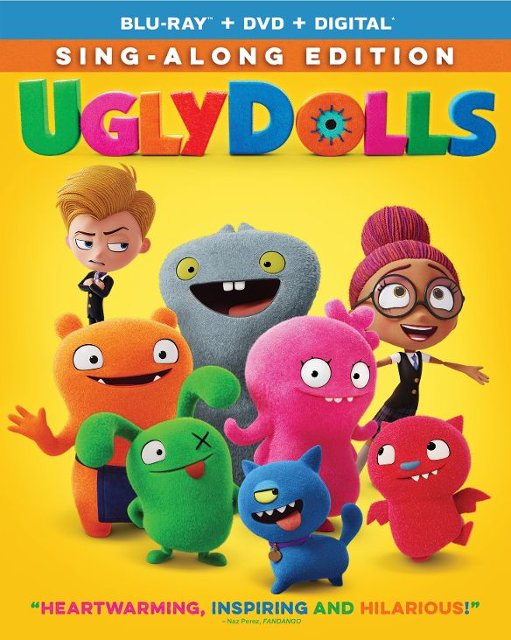