A 1950s melodrama with all of the decade’s sensibilities intact (some honorable, some execrable), Philip Dunne’s Ten North Frederick remains very much a product of its era.

A 1950s melodrama with all of the decade’s sensibilities intact (some honorable, some execrable), Philip Dunne’s Ten North Frederick remains very much a product of its era. With its leading star appearing somewhat ill-at-ease and robotic and other highly touted co-stars burdened by one dimensional writing or indifference to their craft, the movie doesn’t stand the test of time and remains something of a tiresome period trifle.

Joe Chapin (Gary Cooper) is a successful middle-aged businessman with a shrewdly ambitious and steely wife, Edith (Geraldine Fitzgerald). Edith quickly becomes obsessed with Joe’s political future, and desperately tries to cultivate a happy and wholesome family image despite each of her two children Joby (Ray Stricklyn) and Ann (Diane Varsi) having to mask disappointments and keep guilty secrets inside. Though frustrated in his political aspirations, Joe dutifully fulfills his social obligations though he drinks heavily as way to cope with Edith’s pressure and his loveless marriage. But, after his daughter moves to New York to escape her unhappy home and begins sharing an apartment with photographer’s model Kate Drummond (Suzy Parker), Joe’s meeting of her sets off romantic sparks he hasn’t felt in decades, and he becomes torn between his family and his happiness.

Writer-director Philip Dunne has fashioned a rather surface entertainment based on the novel by John O’Hara. Very little depth and dimension have been afforded his characters, even the most important ones (does Joe really have aspirations for the Presidency or is he merely humoring his ambitious wife?). As with so many melodramas from the studio system era, pregnancies occur with the first sexual encounter (which leads to, of course, a quickie marriage and an even quicker annulment), people fall in love on the first date, and one naturally stumbles into out of town acquaintances in a New York City nightclub (as if there were only one in the city that was open for business). Due to the novel’s length, action in the film must be telescoped in time (complete strangers swap gossip about Joe’s family life to fill us in on months of details, the May-December affair between Joe and Kate is reduced to two or three scenes, five years of important emotional despair pass with a simple on-screen title card) robbing the viewer of investing emotionally in the plights of Joe, his unhappy children, and the rejected Kate. Dunne’s direction isn’t very imaginative either: he does spread a shooting gallery concession across the whole of the Cinemascope screen, but so much of the staging is flat and uninspired.

Gary Cooper was not the first choice for Joe Chapin: Spencer Tracy was, and the actor seems fairly disinterested in most of his scenes in the picture with rather insipid line readings and a noticeable lack of commitment to the sudsier elements of the story. Contrarily, Geraldine Fitzgerald as his cold-blooded, grasping wife sinks her fangs into the role with great relish playing a shrewish wife who dominates her children by quashing their dreams to fit her own sense of propriety and eagerly admitting her marital infidelity when her husband’s lack of political success disappoints her. Coming off of an Oscar nomination for Peyton Place, Diane Varsi seems often vague and noncommittal as Ann. Her robotic performance in one of the movie’s most sympathetic parts makes it difficult for the audience to warm to her or become involved in seeing her find some kind of fulfillment. Ray Stricklyn as Joe’s son who wants to pursue music (he’s a talented jazz pianist) against his parents’ wishes for him to become a lawyer only gets a few brief moments to shine delivering an especially blistering summation of his mother’s indifference but elsewhere not provided with enough stinging dialogue to show his independence. Suzy Parker offers a decent performance as the fashionably sophisticated Kate. Tom Tully and Philip Ober make great snakes in the political grass in their brief scenes, and Stuart Whitman gives the film’s best performance as the sexy big band trumpeter who steals Ann’s heart, takes her virginity, and ends up bloody and beaten in an alley for his trouble.

The film’s Cinemascope theatrical aspect ratio of 2.35:1 is faithfully rendered in this 1080p transfer using the AVC codec. While the image is sharp and the grayscale is well above average (black levels vary but at their best are very impressive), there is a disheartening amount of dust, dirt, and damage to the transfer. Fox hasn’t even removed the reel change markers which intrude at several important junctures during the movie. The film has been divided into 24 chapters.

The DTS-HD Master Audio 2.0 stereo sound mix offers an era-appropriate sound design with directional dialogue used throughout and a nice mix of dialogue, music cues (background score by Leigh Harline but with many 1940-45 period instrumental tunes used), and sound effects blended together. There is no age-related trouble with hiss, crackle, pops, or flutter.

Six-Page Booklet: contains a selection of movie stills, original poster art on the back cover, and an earnest essay on the movie by film historian Mike Finnegan.

Ten North Frederick isn’t a particularly satisfying melodrama from the 1950s. Unlike other of the decade’s soapier movies that reveled in their sensational and eye-opening sinful and sexual scenarios, this film, like its protagonist, is too often concerned with its proper breeding and bearing to provide the audience with some down and dirty fun. However, for those interested, there are only 3,000 copies of this Blu-ray available. Those wishing to purchase it should go to either www.twilighttimemovies.com or www.screenarchives.com to see if product is still in stock. Information about the movie can also be found via Facebook at www.facebook.com/twilighttimemovies. 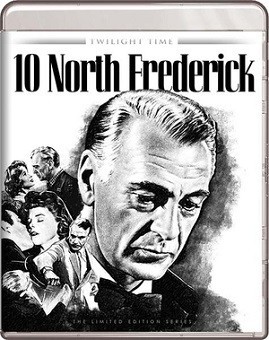