Matthew Vaughn and his crew of filmmakers have done a smashing job of providing a credible and involving backstory for the mutants we know and love in X-Men: First Class.

Matthew Vaughn and his crew of filmmakers have done a smashing job of providing a credible and involving backstory for the mutants we know and love in X-Men: First Class. Giving us a sobering, humane look at the beginnings of the relationships between the characters so familiar to international filmgoers through the X-Men movies, the film has also cleverly tied its fictional origin story to a riveting moment in world history turning this rousingly into a piece of historical comic book fiction that’s both entertaining and moving. In terms of quality and talent, this ranks right up there with the first two movies in the franchise.

After killing his mother in a Polish concentration camp in 1944, Sebastian Shaw (Kevin Bacon) has made an enemy for life of Erik Lensherr (Bill Milner as a boy, Michael Fassbender as an adult). The mutant boy grows into an embittered man who feels he’s alone in the world with his special powers that can control metal, so he’s shocked when he first meets the wealthy and privileged Charles Xavier (James McAvoy) with his powerful mind reading and controlling abilities and his adopted sister Raven (Jennifer Lawrence) who can morph into the visage of anyone she has met. It’s 1962, and Cold War tensions between America and the Soviets have reached a fever pitch. CIA operative Moira MacTaggert (Rose Byrne) feels the mutants can serve some useful purpose in global affairs, but the remainder of the federal government personnel’s feelings run the gamut from mistrustful to downright disgusted. A few other mutants have been gathered together including Alex Summers/Havok (Lucas Till), Darwin/Armando Munoz (Edi Gathegi), and Hank/Beast (Nicholas Hoult). But Sebastian Shaw has his own plans. He wants to start a mutant army and have the world’s two superpowers destroy each other so there will be nothing any longer for the mutants to fear. Xavier not only wants to stop him but feels if the mutants can show the government what valuable powers the mutants possess and how helpful they can be in the upcoming conflict, he thinks they’ll be more readily accepted into the fabric of mainstream America.

By setting the origin story of the mutants in the middle of the well-known Cuban Missile Crisis of 1962, co-writer/director Matthew Vaughn has a ready-made nail-biter backdrop against which to play out his story, And what a rousing story it is (co-written by original X-Men director Bryan Singer) with a genuinely heartfelt story of friendships gone sour between Xavier and Lensherr and investigations into the wonderful powers of some familiar and unfamiliar mutants. In fact, one of the film’s most entertaining sequences involves our watching the young mutants training to hone their skills as they make mistakes, cheer each other on, and genuinely bond through their uniquely special abilities. This also sets up the really moving last act of the film as certain characters choose one side over the other and some of the characters morph into roles we’re more familiar with from viewing the previous movies. It goes without saying that the special effects are dazzling, but much of their use seems much more practical this time out and less simply for a bombastic show and lots of spectacular noise. Though the film runs over two hours, Vaughn’s slick direction speeds things along, and the pace never drags. It’s also remarkable that he’s able to cram so many characters so well realized into a thickly-plotted story and manage to keep things amazingly clear and concise.

Because the original films used two of the world’s most talented mature actors to play Professor X and Magneto (Patrick Stewart, Ian McKellen), it makes perfect sense to cast two of the world’s most talented young actors to play their younger counterparts. Michael Fassbender exudes hyper-intense feelings from the moment he appears before the camera, and his tortured Erik Lensherr is the film’s most magnetic performance (no pun intended). James McAvoy’s Charles Xavier seems altogether right as the privileged, open-hearted character whose brotherly affection for Erik ends in hurtful estrangement. Kevin Bacon makes for a wonderfully evil villain with January Jones as his blankly icy right hand (wo)man effective if somewhat emotionally bland. Jennifer Lawrence’s Raven is a believable younger version of the character played in the first films by Rebecca Romijn capturing the quiet shame of her gift that even the love of Charles and Erik can’t quite erase. The young actors, especially Nicholas Hoult and Lucas Till, make memorable debuts as the younger versions of characters found in the comics. Look quickly and you’ll also see a couple of cameos from original X-Men actors.

The film’s original theatrical 2.35:1 aspect ratio is faithfully presented in a 2160p transfer using the HEVC codec. While sharpness overall is very nice, there are some shots that seem softer and less distinct than the surrounding visuals, something of a surprise for an Ultra HD transfer. Color is solid and controlled throughout with no blooming even with the most brilliant blues and reds. The use of HDR is likewise controlled quite nicely but becomes most impressively evident during the climactic battle scenes where highlights in the clouds and ocean waves stand impressively in relief to the brilliant color and sharpness of the sequence. The movie has been divided into 32 chapters.

This release presents the same DTS-HD Master Audio 5.1 sound mix that is featured on the enclosed Blu-ray and on the previous HD release. Dialogue has been well recorded and placed in the center channel. Otherwise, the remaining channels are alive with almost constant ambient sounds with frequent pans across and through the soundstage and explosive use of the LFE channel. Henry Jackman’s bombastic music score also contains great range through the entire soundstage and the subwoofer.

X Marks the Spot (19:55, HD): an interactive viewing mode which the user may choose upon first playing the film. With it, the film allows the viewer to segue into eight featurettes which extend information about a specific scene in the movie. One may also choose to view the featurettes apart from the film, so they’re also available from the bonus features menu. They deal with the individual introductions of Erik, Charles, and Raven, Hugh Jackman’s cameo, the sound design, the climactic rocket sequence, and the design of the credit sequence.

Cerebro Mutant Tracker (HD): another interactive bonus feature in which the viewer may choose individual mutants who have been shown in the five X-Men films and watch montages of scenes featuring those mutants from all of the films.

Children of the Atom (1:09:49, HD): an expansive making-of documentary dealing with many of the aspects of the movie including the writing of the script, the casting, the special effects, the music, the costumes, and the make-up.

Deleted/Extended Scenes (14:07, HD): thirteen scenes may be viewed separately or in montage.

Returning to the quality and humanity of the first two X-Men features, X-Men: First Class is an enjoyable and enlightening superhero film. While this new Ultra HD release offers terrific picture and sound quality and ports over the bonus features from the previous Blu-ray release, this is not the highest quality UHD disc out there. Regardless, highly recommended! 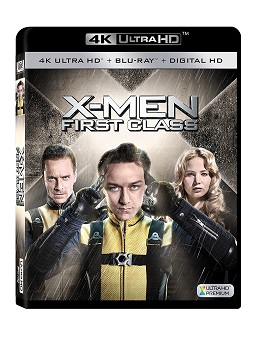