Two classic films are repackaged together with their original bonus features intact. 4.5 Stars

One of the iconic actors of the Golden Age of Hollywood, Gregory Peck appeared in his fair share of classics, and Universal has bundled two of his outstanding movies from the 1960s into the Gregory Peck Centennial Collection.

One of the iconic actors of the Golden Age of Hollywood, Gregory Peck appeared in his fair share of classics, and Universal has bundled two of his outstanding movies from the 1960s into the Gregory Peck Centennial Collection. To Kill a Mockingbird and Cape Fear both still play like gangbusters all these years later, signs of true classics, and the only regret is that Universal didn’t use this 100th birthday celebration to bring even more of the wonderful actor’s films to high definition.

Released from prison after serving eight years for an attack on a woman, Max Cady (Robert Mitchum) returns to a small North Carolina town to find the man he blames for his prison sentence, attorney Sam Bowden (Gregory Peck). Cady’s plan seems to be to so intimidate Bowden, his wife (Polly Bergen) and daughter Nancy (Lori Martin) that they’ll leave themselves open for carelessness so he can swoop in and rape and kill Nancy. Sam tries to get the local police chief (Martin Balsam) to help him out, but Cady is too cagey for the police or the private investigator (Telly Savalas) Sam has hired to keep an eye on his tormentor, and Cady’s lawyer (Jack Kruschen) is compiling enough evidence against Sam’s aggression in his trying to protect his family that he’s under threat of being disbarred.

Based on a John McDonald thriller, James R. Webb’s screenplay is masterfully constructed so that in the eyes of the law, the victim has become the aggressor and is thus susceptible to the law turning against him making him ever more desperate to rid himself and his family of this seemingly unstoppable scourge. The psychological implications of Cady’s plan, hatched during his eight years of incarceration with an in-depth study of the law, is chilling in and of itself, and Webb’s script and J. Lee Thompson’s slowly percolating direction twists the knife in the viewer’s brain ever so slowly as tension ratchets up to the max. While the climax on the Cape Fear River may be a trifle over-extended (not aided by making both of the women targets completely helpless instead of either of them fighting for their lives as one might expect even from Southern belles), there are plenty of moments where in the shadowy nighttime of most of the film, anything might happen at any time. There’s even a brilliantly staged stalking through a boiler room in broad daylight that would make Hitchcock proud (the film often smacks of Hitchcock with his art director, film editor, and composer all on board this film’s production team). Robert Mitchum, no stranger to evil as witness his brilliant performance in Night of the Hunter, is just as menacing here and more than a match for Gregory Peck’s increasingly frantic father. Great supporting turns by Martin Balsam, Jack Kruschen, and Telly Savalas give the movie lots of character though Barrie Chase as one of Cady’s beating victims can’t overcome the really floridly bad writing for her character in her couple of scenes.

Jean Louise Finch (Kim Stanley narrates) looks back on the most momentous year and a half of her life when as a six-year old (Mary Badham), she and her brother Jem (Phillip Alford) endure two life-altering events: her brother and her investigation into the mystery of neighborhood bogey man Boo Radley (Robert Duvall) and her father Atticus’ (Gregory Peck) defense of an innocent black man Tom Robinson (Brock Peters) accused by a drunken farmer (James Anderson) of raping his daughter (Collin Wilcox).

Horton Foote’s screenplay is one of the most masterful adaptations of a classic novel (by Harper Lee) ever achieved, boiling out of the book the soul of the depression South with its fascinating assortment of eccentrics and ordinary folks and fashioning a narrative slice-of-life that never ceases to both amaze and touch one’s heart deeply to the core. A brilliant, Oscar-winning performance by Gregory Peck is assisted by two remarkable child actors (Phillip Alford, Mary Badham) who had virtually no experience before the camera, and yet the essence of youthful exuberance, curiosity, and mischief is captured as lightning in a bottle: true and utterly believable from beginning to end. The tender, evocative direction by Robert Mulligan embraces all of the characters: the sweet and understanding (Rosemary Murphy’s Miss Maudie, Estelle Evans as Calpurnia, Robert Duvall’s Boo Radley), the solid and dependable (Alice Ghostley’s Miss Stephanie, Frank Overton’s Sheriff Tate), even the ornery (Ruth White as Mrs. Dubose) and the ignorant (Collin Wilcox’s Mayella) and the wicked (James Anderson’s Bob Ewell). It would seem utterly impossible to watch this film straight through and not emerge with one’s view of the world if not altered then at least readjusted.

The film’s 1.85:1 theatrical aspect ratio is ably delivered in a 1080p transfer using the VC-1 codec. Sharpness is exceptional throughout with lots of details to be seen in clothes, hair, and facial features and no overpowering use of DNR to smooth away any film grain (some optical zooms magnify the grain as they should unlike in To Kill a Mockingbird where they seem otherworldly and unnatural due to the excessive use of digital filtering). Grayscale is magnificent bringing out the lustrous black levels and crisp whites beautifully. Contrast has also been consistently rendered to make for an exciting encode. Tight line structures don’t produce any of the aliasing or moiré that can be seen in the standard definition bonus feature clips from the movie. The movie has been divided into 18 chapters.

The film’s 1.85:1 theatrical aspect ratio is faithfully reproduced in 1080p using the VC-1 codec. While sharpness is very good overall, Universal’s engineers have applied rather noticeable DNR to rid the picture of the grain which was present in its last DVD anamorphic release of the movie. While facial features and other details haven’t been scrubbed from the image the way they are when DNR has been too heavily applied, the optical zooms used in several moments in the movie all take on a strange, antiseptic look with all of the digital filtering. Grayscale is excellent, and any age-related problems with tears and splices have all been digitally repaired with no telltale signs of manipulation. The movie has been divided into 39 chapters.

The DTS-HD Master Audio 2.0 sound mix offers the era-typical mono sound design that features strongly recorded and always understandable dialogue, Bernard Herrmann’s magnificent dramatic background score, and the atmospheric effects which come across snappily adding to the tension of many of the most dramatic scenes. No age-related problems with hiss or other artifacts are present.

The DTS-HD Master Audio 5.1 sound mix offers the wonderfully recorded dialogue in conjunction with Elmer Bernstein’s haunting, soul-stirring background score and atmospheric effects mostly directed toward the front soundstage with only modest use of the rear channels. Age-related problems with hiss or crackle aren’t present.

The Making of Cape Fear (27:59. SD): director J. Lee Thompson and star Gregory Peck reminisce about the making of the movie in separate interviews in which they discuss the pre-production work on the script and Savannah locations, the strong cast, the censorship troubles, and even both discuss Martin Scorsese’s remake.

Digital Copy/Ultraviolet: codes for both films contained on a sheet inside the case.

Audio Commentary: director Robert Mulligan and producer Alan J. Pakula share wonderful stories about the film’s production with occasional silent patches but always with something of interest to say.

U-Control : an interactive secondary audio and video supplement which opens a window during various scenes in the movie that features on-camera interviews with production personnel talking about aspects of that particular scene.

Fearful Symmetry: The Making of To Kill a Mockingbird (1:30:13, SD): a feature length documentary featuring production personnel discussing the making of the movie along with people who grew up with Harper Lee in Alabama who comment on the Southern way of life during the depression. Many of the filmed interviews for this feature are also used in the U-Control bonus feature described above.

A Conversation with Gregory Peck (1:37:37, SD): a behind-the-scenes look at the elderly Peck taking part in a series of Q&A audience participation shows around the country while also interacting with his family and friends.

Academy Award Best Actor Acceptance Speech (1:31, SD): Peck’s brief speech in accepting the Oscar for his performance in the film.

Excerpt from A Tribute to Gregory Peck (10:09, SD): Peck’s daughter Cecilia thanks the Motion Picture Academy for the evening honoring her late father’s memory.

Scout Remembers (12:01, SD): Mary Badham reminisces in 1999 about her experiences making the film and her close attachment to Gregory Peck.

100 Years of Universal: Restoring the Classics (9:13, HD): film restorers Bob O’Neil, Peter Shade, Rick Utley, and John Edell, among others, discuss the work Universal has been doing on some of its many classics showing before-and-after clips of restoration effects on such films as Pillow Talk, Dracula, Frankenstein, To Kill a Mockingbird, and others.

Photograph Set: six cards with behind-the-scenes photographs and both poster reproductions for the movies.

Digital Copy/Ultraviolet: code sheet for both films enclosed in the case.

While the Gregory Peck Centennial Collection contains two of the actor’s best performances under the Universal banner, it seems a pity that other 1960s output from Universal including Captain Newman, M.D., Arabesque, and Mirage weren’t also selected for high definition treatment in this Blu-ray collection. For those who don’t already have To Kill a Mockingbird and Cape Fear, of course, this release with a very attractive price is highly recommended.

I am surprised Matt that you are rating the picture quality of Cape Fear 5/5. It is servicable but not much more. That is if Universal has repackaged it or maybe it is a new transfer?

In any case for the old Universal Blu-ray grain looks a bit funny in motion and the picture has a digitzed look to it.
I think I have seen reviews between 3/5 to 4/5 and 3.5 imo is a bit on the generous side already.

I am not writing this to deter buyers but while its PQ is not horribly bad Cape Fear certainly is not on the PQ level of for example Double Indemnity or On the Waterfront.
You must log in or register to reply here.
Share:
Facebook Twitter Reddit Pinterest Tumblr WhatsApp Email Link 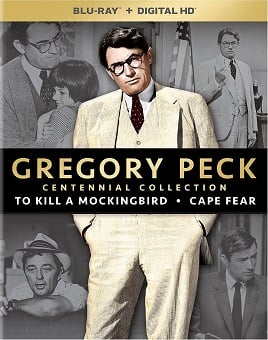