Forum List What's new Dark Style Change width
Log in Register
What's new Search
Menu
Log in
Register
Navigation
Install the app
More options
Dark Style
Close Menu
Posted on August 23, 2019 by Matt Hough
You are using an out of date browser. It may not display this or other websites correctly.
You should upgrade or use an alternative browser.
Atypical Elvis Presley movie features one of his best film performances. 3 Stars

Philip Dunne’s Wild in the Country offers a change of pace for Elvis Presley, an honest attempt to provide something other than his usual musical comedy formula performance.

After his sensational introduction to films in 1956’s Love Me Tender, Elvis Presley made a concerted effort for a time to become an actor and not merely appear in films as an outsized personality who relied on his looks and his way with a song. By 1961, however, Elvis (and possibly his management) seemed less interested in pursuing real acting challenges. Philip Dunne’s Wild in the Country is one of the last movies in which Elvis made a concerted effort to portray a three-dimensional character with shades to his personality and conflicts which could not be shucked away with an upbeat melody. And he’s so good, in fact, that his subsequent cotton candy fluff musicals that he spent most of the 1960s appearing in are like footnotes to this noble effort in an otherwise sudsy melodrama.

After being granted parole from prison for a car theft that he didn’t commit, rebellious, high strung Glenn Tyler (Elvis Presley) goes to work for distiller Rolfe Braxton (William Mims). Rolfe is eager for Glenn to fall for his daughter Noreen (Tuesday Weld), an unwed mother, and make an “honest” woman of her. But Noreen is only one of three women with an intense interest in the young man. His old school sweetheart Betty Lee Parsons (Millie Perkins) is still very much in the picture even if her father objects to their relationship, and one of the parole board’s members Irene Sperry (Hope Lange), a psychiatrist who wants to understand Glenn’s restless spirit better, takes an interest in the lad who has a keen way with words and is eager to become a writer. But with Glenn’s lack of social status and his inability to keep himself from flying off the handle at the least slight, the town where he lives makes it very difficult for him to attempt to rise above his lowly station.

Elvis Presley and prize-winning writer Clifford Odets: they seem an odd couple indeed to collaborate on a movie though Odets, who wrote many plays featuring angry young men wistful for something better, here has adapted someone else’s story, the novel The Lost Country by J.R. Salamanca. What begins as a promising melodrama with a slate of characters who run the gamut from upper crust to slatternly churns discouragingly into turgid soap opera by the end with ridiculous emotional extremes by all of the featured players (a ludicrous suicide attempt near film’s end is especially absurd) and a climactic trial that seems right out of Peyton Place (produced by Jerry Wald who also produced this film) with the same kind of small town gossip ruling the hearts and minds of its citizens (1961 also produced Return to Peyton Place at Fox which also ended in a climactic trial with Tuesday Weld prominent in that movie, too). The filmmakers manage to shoehorn into the film two songs in addition to the title number: “Stumbled and Fell” and “I’ll Be True in My Way,” neither very necessary to the story but warbled by Elvis appealingly especially the latter with Tuesday Weld adding a bit of melody here and there. Director Philip Dunne lets the narrative dawdle off and on; the film seems longer than its 114-minute running time.

Elvis Presley gives one of the better performances in the film: he’s actually playing a misunderstood youth who is more troubled by a dysfunctional upbringing than by being truly a bad boy, and he does a fine job even when the script has him bouncing between the three women like a ping pong ball. Hope Lange tries very hard to give her role some dignity and strength, but she’s too young for the part (it was originally intended for Simone Signoret), and her character’s alleged one night stand with Glenn would make perfect sense for two people of approximately the same age. Millie Perkins does her usual forgettable job (and she becomes a decided afterthought as the picture runs toward the two-hour mark). Tuesday Weld goes for broke with the soapy nonsense, but she surprisingly doesn’t embarrass herself. John Ireland as Irene’s jealous suitor and Gary Lockwood as his trouble-making only child make notable villains in their one-dimensional roles, but Olympic star Rafer Johnson is simply awful in a couple of brief appearances. Look quickly to see Joan Crawford’s notorious daughter Christina in a brief role as Monica George, one of Gary Lockwood’s dates.

The film’s original Cinemascope aspect ratio of 2.35:1 is faithfully rendered in a 1080p transfer using the AVC codec. The image boasts a solid grain structure and mostly good DeLuxe color, only occasionally a bit faded in long shots. But there are some stray bits of dust and dirt here and there which do draw one’s attention from the story when they appear. Black levels are generally very good. The movie has been divided into 24 chapters.

The DTS-HD Master Audio 2.0 stereo surround track seems to have been remixed for the Blu-ray (the DVD had a Dolby Digital 4.0 soundtrack). Nevertheless, it’s an excellent soundtrack featuring occasional directional dialogue and Kenyon Hopkins’ background score mixed with surety with the appropriate sound effects. Any age-related problems with hiss, flutter, crackle, and hum have been eliminated resulting in a solid aural experience.

Six-Page Booklet: contains some color stills, original poster art on the back cover, and film historian Mike Finnegan’s engaging analysis of the movie.

Philip Dunne’s Wild in the Country offers a change of pace for Elvis Presley, an honest attempt to provide something other than his usual musical comedy formula performance. That the film doesn’t quite work is a shame but in no way negates the solid work offered by many participants in this era-typical melodrama. There are only 3,000 copies of this Blu-ray available. Those interested in purchasing it should go to either www.twilighttimemovies.com or www.screenarchives.com to see if product is still in stock. Information about the movie can also be found via Facebook at www.facebook.com/twilighttimemovies. 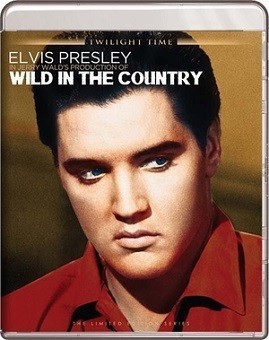