Luc Besson’s movies are an acquired taste, and his most recent, Valerian and the City of a Thousand Planets, is no exception. It’s a great looking movie with enough quirks to make it different from all the other comic book adaptations, but failed to connect with a worldwide audience, nearly bankrupting its studio, Europacorp.

Valerian (Dane DeHaan) and his partner Laureline (Cara Delevingne) have been tasked to retrieve a Mül converter believed to have been stolen and is about to be sold on the black market on the planet Kyrian ddep within its multi-dimensional Big Market. The Mül converter is a small animal capable of replicating virtually anything it ingests, and it the last of its kind when the planet Mül was destroyed as collateral damage in a battle that took place just outside its orbit nearly 30 years ago. After a thrilling chase through the multi-dimensional streets, Valerian and Laureline retrieve the converter and head for Alpha, a giant city in space that began hundreds of years ago as the International Space Station. It is there that they turn the converter over to Commander Arun Filitt (Clive Owen), who informs them that Alpha has been infected with a toxic force that has killed anyone who has tried to breach it and it is growing at an alarming rate. Filitt attends a summit to discuss the issue with representatives from the many area of Alpha, with Valerian and Laureline assigned to him as bodyguards. At the summit, Filitt is kidnapped by refugees from Mül in an effort to retrieve the converter. However, the converter was being guarded by Laureline at the time. Valerian and Lauerline are now tasked to find the Commander and free him, and find out what the toxic force is and who is behind it.

Director Luc Besson is an acquired taste, and I’ve found most of his films that I’ve seen to be, at the very least, visually interesting and often stunning, but sometimes lacking in a cohesive story. He is best known for the films Le Femme Nikita, Leon: The Professional, The Fifth Element, and more recently, Lucy. Valerian and the City of a Thousand Planets is his return to science fiction since The Fifth Element twenty years ago, and has been a pet project of his since he was a young boy, reading the French comic books Valerian and Laureline by Pierre Christin and Jean-Claude Mézières first published in 1967. Besson’s film is visually stunning (I’ll be shocked if it does not at least garner Oscar nominations for Art Design and Visual Effects). Standouts are the opening sequence on the planet Mül, the entire Big Market sequence, and Rhianna’s dance transformation scene, to name but a few. On the surface, the story is an entertaining one. One of the biggest problems is that much of what Valerian and Lauerline uncover is almost all by coincidence or circumstance, not from any real investigative work. It also doesn’t help that Dane DeHaan is badly miscast as Valerian, who doesn’t hold much screen presence here and has very little chemistry with his co-star Cara Delevingne, who is one of the best things in this movie despite not having much to work with. She’s having fun with the role, and it shows in her performance. As does Ethan Hawke’s performance as Jolly the Pimp, a role Besson envisioned for Dennis Hopper (which was Hawke’s cue to the character). Clive Owen does nothing more than growl and bark his orders as Commander Filitt. Valerian may not be a very good movie, but at its core, it is an entertaining and at times odd movie (in a good way).

Valerian and the City of a Thousand Planets was captured digitally on Alexa XT cameras and completed as a 2K digital intermediate with Dolby Vision high dynamic range. Lionsgate’s 2160p upscale includes both Dolby Vision and HDR10 (this review is based on HDR10). There is a slight increase in fine detail when compared to the included 1080p Blu-ray, most noticeably in the textures of fabrics used in many of the uniforms and the skin of the armadillo-like Mül converter. Contrast is also improved, with deeper blacks and increased shadow detail, especially in some of the underwater sequences. The major improvement, though, is in the skins of the pearl creatures from Mül, adding a more distinct translucency in their appearance. Colors are also much more vibrant in this UHD version.

The UHD disc contains the same Dolby Atmos mix on the included 1080p Blu-ray, and it is everything one would expect in an Atmos track for a movie of this kind. It is wide and expansive, with precision-placed sound effects in front, behind, and above you (even in a 5.1.2 configuration). LFE is strong, especially during battle sequences, without ever being too boomy. Alexandre Desplat’s score is also more immersive with the addition of the height channels. Dialogue is clear and understandable throughout, never getting lost in the mix.

As with most Lionsgate releases, all of the Special Features content from the Blu-ray edition are also accessible on the UHD version.

Citizens of Imagination: Creating the Universe of Valerian (1080p; 59:04): A fairly extensive look at the making of the film and its origins, viewable as one long documentary or as five individual segments – Paper/Ink/Flesh/Blood: Origins, To Alpha and Beyond: Production and Stunts, It Takes Two: Valerian & Laureline’s Partnership, Denizens of the Galaxy: Humans and Aliens, and The Final Element: Visual Effects.

The Art of Valerian (1080p): Still gallery of concept drawings.

Although Valerian and the City of a Thousand Planets was considered a financial failure ($180 million budget – the most expensive film from France –  and a worldwide box office take of $225 million), it still manages to entertain with its eye-popping visuals and immersive sound design.

One of the biggest problems is that much of what Valerian and Lauerline uncover is almost all by coincidence or circumstance, not from any real investigative work.
Click to expand...

Exactly how I felt about the original Blade Runner. But, after I watched it 3 more times, it grew on me.

Maybe I'll give this movie a chance after all.
Expand signature
Youtube video of my home-theater set-up. July 2009. Check it out.

Thanks for the review, Todd. I normally like Besson's films, but there have been enough negative reviews of this movie where I think I will have to rent it first instead of making a blind purchase.
Expand signature
My DVD Collection

This movie will be a future $5 dump bin purchase for me.

Hey, even Todd is allowed to like a film that many consider not good.
Expand signature
Crawdaddy's favorite "The Mandalorian" Quotes: "This is the Way" and "I have Spoken"

I thought Todd's review was spot on. I saw VALERIAN theatrically and was thoroughly entertained despite the film's obvious flaws. I knew I would be ordering the 4K Blu-Ray once it was announced. As Todd noted in his opening comments, Luc Besson is definitely an acquired taste.
Expand signature
"Dignity. Always dignity."

My 4K/3D/BD combo shipped from the UK today.
Reactions: Tino and George_W_K

I need to get a region free player.
Expand signature
It's gonna be a hell of a ride. I'm ready. .

bujaki said:
My 4K/3D/BD combo shipped from the UK today.
Click to expand...

Do you have a link?
Expand signature
It's gonna be a hell of a ride. I'm ready. .

Tino said:
Do you have a link?
Click to expand...

Thanks Edwin but that link just brings me to the regular domestic blu Ray.
Expand signature
It's gonna be a hell of a ride. I'm ready. .

For some reason, the link redirects to the 2D version. Just go to amazon.co.uk and search for Valerian 3D blu, and it should take you to the correct page.
Expand signature
"Dignity. Always dignity."

Apparently this disc is region 2 only.

RichMurphy said:
For some reason, the link redirects to the 2D version. Just go to amazon.co.uk and search for Valerian 3D blu, and it should take you to the correct page.
Click to expand...

Did that. No luck.

Looking for the 3D/4K combo as mentioned above.
Expand signature
It's gonna be a hell of a ride. I'm ready. .

Tino said:
Thanks Edwin but that link just brings me to the regular domestic blu Ray.
Click to expand...

Hmmm. OK, that is odd. It goes straight to the Amazon UK page when I click on it. Amazon US must have something in place that re-routes to the US site.


TJPC said:
Apparently this disc is region 2 only.
Click to expand...

Josh Steinberg mentioned, in another thread, that the region 2 information for this disc on Amazon UK is incorrect. The disc is region free. I didn't know that and had ordered the much more expensive steel book version. I decided to not cancel and reorder as I like the look of the steel book better than the regular. Also, the steel book version specifically mentioned being region free.
Last edited: Nov 26, 2017
Expand signature
"You bring a horse for me?" "Looks like......looks like we're shy of one horse." "No.......You brought two too many."

Are we sure the Valerian 3D blu is region free??

Can someone please confirm.
Expand signature
It's gonna be a hell of a ride. I'm ready. .

I searched and didn't see a 4k/3d combo either.
Expand signature
Youtube video of my home-theater set-up. July 2009. Check it out.

George_W_K said:
I searched and didn't see a 4k/3d combo either.
Click to expand...

I'm pretty sure that is due to it being sold out, so Amazon UK pulled the listing. I had ordered the 4K/3D combo earlier. Then I saw the listing for the 3D steel book which has the same cover as the 4k/3D steel book. I thought I had made a mistake in ordering so I canceled the order about a half and hour ago. My account status said the disc was "on the way" with a delivery date. When I canceled, it said "refund in progress" and "there is no need to return the item", so now I'm wondering if it was already shipped out before I canceled or was still processing.

Seriously, I have been brain farting over the whole weekend. If my cancellation went through before it was shipped then I pretty well screwed myself as the 4K/3D steel book is presently unavailable with no indication if it will be restocked.
Expand signature
"You bring a horse for me?" "Looks like......looks like we're shy of one horse." "No.......You brought two too many."

This is on another thread:

Terry, I also have an LG multiregion blu-ray player (not 3D) and it's currently set for playing region A discs. I've popped in the Valerian 2D and 3D discs just now and a message came up saying they are the wrong region code. Not sure if that's any help to you, but who knows some blu-ray players can play all sorts of discs.
You must log in or register to reply here.
Share:
Facebook Twitter Reddit Pinterest Tumblr WhatsApp Email Link 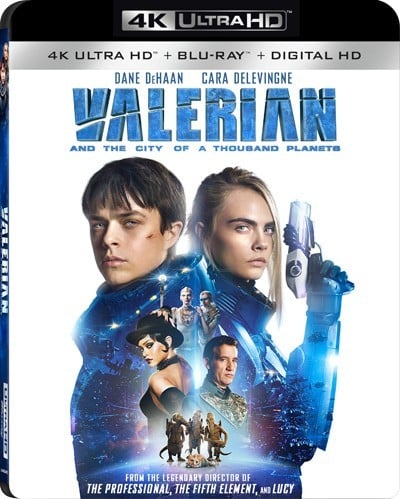