Perhaps the first ever pop opera with through-sung dialogue amid a sprinkling of haunting melodies, Jacques Demy’s The Umbrellas of Cherbourg (Les Parapluies de Cherbourg) is a special kind of musical treat.

Perhaps the first ever pop opera with through-sung dialogue amid a sprinkling of haunting melodies, Jacques Demy’s The Umbrellas of Cherbourg (Les Parapluies de Cherbourg) is a special kind of musical treat. Its simple, touching story and gorgeous actors playing out a youthful love affair and its aftermath over a period of six years leave a poignant aftertaste when the movie is complete, and it’s hard to get those heartfelt Michel Legrand tunes out of one’s head after first experiencing this lovely, delicately constructed film.

Geneviève Emery (Catherine Deneuve, vocals by Danielle Licari), a beautiful seventeen-year old Frenchwoman who works at her mother’s (Anne Vernon, vocals by Christiane Legrand) boutique selling umbrellas, falls for handsome garage mechanic Guy Foucher (Nino Castelnuovo, vocals by Jose Bartel) over her mother’s objections. Their romance is interrupted when Guy is drafted to serve in the French army fighting in Algeria. Though pregnant by Guy, Geneviève marries a rich older businessman who will raise the child as their own, Roland Cassard (Marc Michel, vocals by Georges Blanes), when she senses Guy losing interest during their separation and begins to move on with her life. When Guy returns from his military service, he’s devastated to learn what Geneviève has done.

Jacques Demy’s libretto for his through-sung screenplay creates a pleasing if predictable framework on which to hang the musical motifs created by Michel Legrand. The characters are not particularly deep and are certainly not sophisticated in their basic emotional needs and responses to others, and we’re faced with the usual stereotypes in these varying relationships: Geneviève’s mother objecting to her daughter’s attraction to a grease monkey, Guy’s clinging invalid Aunt Élise (Mireille Perrey, vocals by Claire Leclerc) who basks in his attractiveness and doesn’t want to share him with anyone else, not even her devoted caregiver Madeleine (Ellen Farner, vocals by Claudine Meunier) who carries an obvious torch for Guy. But the simplicity in the narrative development and characterizations takes a back seat to the stunning color production design by Bernard Evein which features a mixture of soothing pastels and eye-popping primary hues which draw us into this candy-colored world of constant song forms cleverly conceived by Michel Legrand. He uses a swing motif every time we enter Guy’s garage workplace (one of the mechanics even ironically warbles about how he prefers movies to opera with “all that singing”) while Guy and Geneviève’s scenes of romance include the duet that came to be known as “I Will Wait for You,” the primary musical theme that runs throughout their tortured relationship and thus the movie. Roland’s musical song motif “Watch What Happens” likewise haunts the ear, but even opera-phobic viewers likely will settle easily into the sung recitative amid the beautiful visual compositions and the attractive cast.

The fact that all of the principal actors are dubbed by professional singers doesn’t detract from their abilities to beautifully lip synch their performances while playing the emotions behind Demy’s lyrics. You’ll never find more stunning beauties to play your romantic leads than Catherine Deneuve and Nino Castelnuovo, she being especially breathtaking on the first sight of her fresh-faced innocence and later astonishing as a wealthy young mother in an elaborate hair style and expensive clothes. Castelnuovo hits powerful dramatic notes on returning from the service and finding that his world has collapsed around him. Anne Vernon conveys her desperation over her failing business and her desire for her daughter’s future being assured quite wonderfully, and Marc Michel as the wealthy and attractive Roland is more than sufficient as an alternative to the handsome Guy. Ellen Farner blossoms in the later stages of the film once her Madeleine achieves her heart’s desire, and Mireille Perrey as the pitiful Aunt Élise makes her few scenes really count with a couple of aching tunes.

The film has been framed here at 1.85:1 and is presented in 1080p resolution using the AVC codec. It’s a gorgeous transfer based on a 2013 restoration of the film, and the care which has gone into it really shows as there isn’t a speck of stray dirt or a scratch in evidence. While sharpness is outstanding and much detail can be seen in facial features, hair, clothes, and production design (enough to see dents in walls and stains in wallpaper), there are shots which do seem a bit less sharp than others. The film’s grain structure is intact though it sometimes seems a bit heavier in some scenes than others, enough to affect color density and consistency in the occasional shot. The film is a candy-colored riot of matching hues in costumes and wallpapers and color schemes, and never has the color seemed as solid in previous home video releases as it does here with completely natural skin tones. The white English subtitles are always very easy to read. The movie has been divided into 15 chapters.

The original monaural sound mix has been expanded here in a DTS-HD Master Audio 5.1 presentation. Though the music does spread softly into the surrounds to give a slightly wider soundstage listening experience, the voices and music are still reasonably mono in effect with their greatest presence still being in the center channel and to a lesser extent in the front surrounds. Age-related problems with hiss, crackle, or sibilance are nowhere to be heard.

Once Upon a Time . . . The Umbrellas of Cherbourg (54:24, HD): a 2008 documentary featuring vintage footage of director Jacques Demy talking about his creation with other comments offered by composer Michel Legrand, Demy’s wife Agnes Varda, the film’s costumer designer Jacqueline Moreau, and actors Catherine Deneuve and Marc Michel.

Video Essay (22:43, HD): film scholar Rodney Hill explains how the film both fits into the French New Wave movement and also reflects a different sensibility at the same time. He also discusses Jacques Demy’s earlier films which led him into the creation of this work.

Cinépanorama Interview (11:15, HD): an interview segment from a 1964 French television series with Jacques Demy and Michel Legrand asked a series of tough questions on their art and methods.

Restoration Discussion (6:11, HD): Agnes Varda and Demy’s children Mathieu Demy and Rosalie Varda-Demy discuss the work done visually and aurally on the film for its 2013 restoration.

Enclosed Pamphlet: contains the cast and crew list, information on the transfer, and an extensive essay on the movie by film historian Jim Ridley.

Winner of three prizes at the 1964 Cannes Film Festival including the Palme d’Or, The Umbrellas of Cherbourg continues to weave its musical spell decade after decade. The Criterion Blu-ray disc single release from an earlier Jacques Demy box set is a winner on all counts and a must for film enthusiasts looking for something truly unique. Highly recommended! 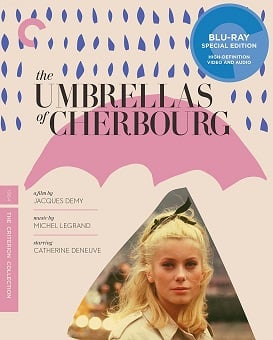