Forum List What's new Dark Style Change width
Log in Register
What's new Search
Menu
Log in
Register
Navigation
Install the app
More options
Dark Style
Close Menu
Posted on April 26, 2017 by Matt Hough
You are using an out of date browser. It may not display this or other websites correctly.
You should upgrade or use an alternative browser.
Fizzy comic caper romance still plays beautifully. 4 Stars

The third collaboration between director William Wyler and star Audrey Hepburn, How to Steal a Million might not have the poignant effervescence of their Roman Holiday, but it’s a light and airy comic caper film with just the right touches of romance and nonsense.

The third collaboration between director William Wyler and star Audrey Hepburn, How to Steal a Million might not have the poignant effervescence of their Roman Holiday, but it’s a light and airy comic caper film with just the right touches of romance and nonsense. Beautifully filmed on location in Paris, How to Steal a Million is a carefree romp that doesn’t take time to think about its own preposterousness.

Expert art forger Charles Bonnet (Hugh Griffith) makes a handsome living auctioning priceless works of forged art as original masterpieces even though his daughter Nicole (Audrey Hepburn) is constantly petrified that he’s going to be caught and sent to prison. When a replica statue of Cellini’s Venus crafted by Bonnet’s father and loaned to a French museum as the real thing runs the risk of being discovered as a forgery, Nicole hires Simon Dermott (Peter O’Toole) whom she mistakenly thinks is a cat burglar to work out a scheme to steal the figurine from the museum. Security is tight, and she and Simon are really amateurs at theft, so the risk they’re taking is a large one which might find them both going to prison in addition to her father.

Harry Kurnitz based his screenplay on the story “Venus Rising” by George Bradshaw, and it’s filled with clever introductions for the two stars and a meet cute between them that climaxes in a gun going off hilariously sealing their partnership to come. During the course of that partnership, the two share scenes in restaurants and swank cars, but it’s their lengthy pas de deux in a broom closet that asserts the film’s charms most assiduously. The heist doesn’t rank with those in Gambit or Topkapi, and the film is probably ten or fifteen minutes too long for the story it’s conveying, but it’s really the character interactions rather than the intricate plotting that give this movie its lightness and charm. William Wyler directs with a sure hand including the very funny sight gag of showing from the outside what the insides of the museum in the middle of the night look like going berserk when the alarm is tripped, a motif he shows us three times and always to riotous effect. He also helms an early art auction scene with droll expertise and fashions a most clever entrance into the art forger’s secret lair. The lushness of so much of the film – Bonnet’s palatial mansion, the enormous art museum, and the stunning array of cars and fashions on display (especially on Miss Hepburn who is more clotheshorse here than in any other film since her fashion model role in Funny Face) – give the film an air of undeniable class and sophistication.

It’s a delight to see Audrey Hepburn playing such a stylish and fun character and shining so brightly under Wyler’s direction, and she looks stunning in the parade of Givenchy creations (though she’s about as believable as a charwoman late in the film as any other glamorous star of the era would have been). Peter O’Toole offers us a sly, relaxed charmer as her romantic interest, and the two stars have a palpable chemistry together. But the film is stolen in all of his scenes by Hugh Griffith as Hepburn’s larcenous father. With popped eyes and eyebrows the size of New Jersey, Griffith plays the artistic rapscallion with a charming innocence and wryness that’s tremendous fun. Eli Wallach pops in for a few scenes as an art connoisseur who also flips for Hepburn’s Nicole, but he’s more a function of the plot than a character who gets much in the way of the narrative. Charles Boyer also has a couple of minor scenes as an art expert who gives O’Toole some tricks of the trade at recognizing art forgeries. Jacques Marin has several entertaining moments as the head museum guard who’s kept very busy during the night of the heist, and he’s assisted by Moustache as the most prominent of the underling guards who keeps his trusty bottle of wine hidden for his convenience during his rounds.

The film’s 2.35:1 Panavision aspect ratio is faithfully reproduced in this 1080p transfer using the AVC codec. Apart from a couple of inserted shots which seem magnified and distorted in terms of focus, color, and grain structure, sharpness by and large is excellent, and color values are first-rate though some may feel the flesh tones veer a little on the brown side. There are no age-related problems with dust specks or scratches, and contrast is consistently applied throughout for a fine transfer. The movie has been divided into 24 chapters.

The disc offers DTS-HD Master Audio 2.0 sound mixes in both mono and stereo. The stereo track is very listenable and presents John Williams’ jaunty, appealing background score quite fetchingly though it tends to send the dialogue tracks across the front soundstage and not just relegated to the center channel. There are no age related problems with hiss, crackle, or flutter with either track.

Audio Commentary: director William Wyler’s daughter Catherine and actor Eli Wallach each present reflections on the film edited together into a single track. There are plenty of lengthy silent gaps later in the movie but their recollections do offer some tasty tidbits of information on the film’s creation and production.

Six-Page Booklet: contains some color stills from the movie, original poster art on the back cover, and film historian Julie Kirgo’s ebullient appreciation of the movie.

A charming comic trifle, How to Steal a Million is as champagne fizzy and light today as it was when it was first released, and it’s a pleasure to welcome it to high definition in this Blu-ray release by Twilight Time. There are only 3,000 copies of this Blu-ray available. Those interested in purchasing it should go to either www.twilighttimemovies.com or www.screenarchives.com to see if product is still in stock. Information about the movie can also be found via Facebook at www.facebook.com/twilighttimemovies.

I really like this film. Thanks for the review!!

I do wonder if this film was any inspiration for (or influenced) the film How To Beat The High Cost Of Living (1980) which came to Blu not too long ago.
Haven't yet seen HTSAM so I can't do a decent comparison at this time though I'll be looking to add HTSAM to my library. 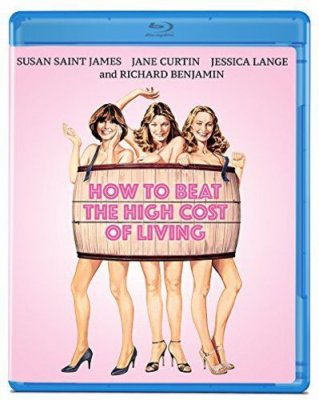 Twilight was out of stock but screen archives has it!

Hurry if you want one before they are out of print!!

Kyrsten Brad said:
I do wonder if this film was any inspiration for (or influenced) the film How To Beat The High Cost Of Living (1980) which came to Blu not too long ago.
Haven't yet seen HTSAM so I can't do a decent comparison at this time though I'll be looking to add HTSAM to my library.

Funny, I just watched these back to back more or less (watched how to beat... Monday night and how to steal... Tuesday night). Both are good comedic crime capers but the motives by the protagonists are defitintely different. Topkapi is another film in the same genre that is a lot of fun. All of these films in my opinion are very funny and well done. I recommend them all! I picked up how to steal a million during the last TT sale and I’m glad I did since it is very low quantity now.
You must log in or register to reply here.