Woody Allen's haunting memory drama is one of his best. 4 Stars

Mid-life crisis hits many of us full-on and very hard, and that’s certainly the case in Woody Allen’s Another Woman, an outstanding production that presents several characters wrestling with the restlessness and dissatisfaction that can come to those who reach fifty.

Woody Allen has assembled an absolutely sensational cast for the best of his 1980s dramas Another Woman. Mid-life crisis hits many of us full-on and very hard, and that’s certainly the case in this outstanding production as several characters wrestle with the restlessness and dissatisfaction that can come to those who reach fifty, all told in a hypnotic compendium of dreams and flashbacks that reveal hopes and desires, disappointments and deceptions long since buried but not completely forgotten.

While working in her sublet apartment which sits next to a psychiatrist’s office, celebrated philosophy professor Marion Post (Gena Rowlands) overhears the confessions of an anguished pregnant woman (Mia Farrow). Though she doesn’t know the woman named Hope (and makes some attempts to follow and get to know her since she seems to be contemplating suicide), her comments seem to spur memories of her own as Marion in both present situations and past memories begins to examine strained and often unsatisfying relationships with her father (John Houseman in the present, David Ogden Stiers in the past), brother Paul (Harris Yulin) on the verge of a divorce from his wife Lynn (Frances Conroy), former best friend-now well-known actress Claire (Sandy Dennis), best friend Lydia (Blythe Danner), former husband Sam (Philip Bosco), current husband Ken (Ian Holm), and former friend Larry (Gene Hackman) whose continuing passion for Marion goes unconsummated.

Woody Allen’s screenplay has often been dinged as hewing too closely to Ingmar Bergman’s Wild Strawberries, but that film concerned a man at the end of his life contemplating his mistakes and wrong turns while Another Woman catches Marion at age fifty with mistakes and regrets in her past but with a set of realizations coming to her in a series of epiphanies that allow her to move forward with hope and the promise of a brighter tomorrow. It also allows not only the main character of Marion but also all of those people in her orbit to be fashioned as fascinating people of depth and real interest to the viewer, something not always the case in Woody Allen’s previous dramas. Here, however, the cast of characters, even in one scene roles (like Ken’s former wife Kathy played with unbalanced brilliance by Betty Buckley), are endlessly captivating people, and the secrets revealed do often come as unpleasant shocks to the system. Allen doesn’t write down to his audience as the dreams and memories often appear without warning (he has Marion narrating her story to help somewhat in cluing us in when a memory is forthcoming), and sometimes present day Marion interacts with past events or her present day character swaps shots with her as a younger woman, especially effective in the scenes with her first love, her college professor Sam whom she ended up marrying. Allen’s direction takes in the wonders of New York’s Greenwich Village and Central Park, and the warm, mesmerizing cinematography of Sven Nykvist enhances the allure of Manhattan.

It’s a triumphant performance for Gena Rowlands whose slowly dawning realization that her perfect life isn’t and hasn’t been quite so perfect is miraculous to see unfold. Ian Holm as the rather cold and tight second husband Ken hits all the right notes without ever dipping into melodramatic histrionics. Blythe Danner has personality to spare as the vivacious best friend Lydia while Gene Hackman as the man who loved and lost Marion gives his small role wonderful depth and pathos. The young Martha Plimpton scores another career high as Marion’s stepdaughter who admires her so much while Harris Yulin and Frances Conroy as Marion’s brother and sister-in-law each score pointedly in their individual encounters with Marion. Sandy Dennis is heartbreaking as the insecure actress who abandoned the friendship by refusing to compete with her more cerebral best friend. John Houseman and David Ogden Stiers make believable older and younger versions of Marion’s demanding and over-critical father. Though her role is the catalyst for all that comes after, Mia Farrow’s part as Hope is perhaps the least interesting of the major players in this drama.

The film’s original theatrical aspect ratio of 1.85:1 is faithfully represented in this 1080p transfer using the AVC codec. Sven Nykvist’s warm and welcoming camerawork is captured quite wonderfully in a picture boasting excellent sharpness and a real film-like appearance with obvious but fully controlled grain and beautifully temperate color timing throughout. Contrast is nicely consistent for an appealing visual allure. The movie has been divided into 24 chapters.

True to Woody Allen’s audio design of the era, the DTS-HD Master Audio 2.0 mix is monaural but boasts exceptionally well-recorded dialogue. The use of classical and popular music to enhance the soundtrack is another Allen trademark, and it and the atmospheric effects are mixed with surety. There are no problems with age-related artifacts like hiss or crackle.

Woody Allen’s thoughtful and sometimes painful drama Another Woman comes to high definition in a beautifully prepared Blu-ray package. There are only 3,000 copies of this Blu-ray available. Those interested in purchasing it should go to either www.twilighttimemovies.com or www.screenarchives.com to see if product is still in stock. Information about the movie can also be found via Facebook at www.facebook.com/twilighttimemovies. 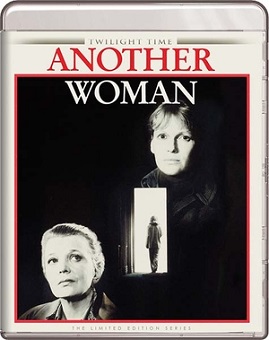