Our Man in Havana is a droll, entertaining spoof of British Intelligence that is skillfully adapted by Graham Greene from his own novel and directed by Carol Reed. An added pleasure is the wonderful black & white location filming in Cuba by Oswald Morris, beautifully brought to Blu-ray by Twilight Time and Sony.

Our Man in Havana is a droll, entertaining spoof of British Intelligence that is skillfully adapted by Graham Greene from his own novel and directed by Carol Reed. An added pleasure is the wonderful black & white location filming in Cuba by Oswald Morris, beautifully brought to Blu-ray by Twilight Time and Sony.

Jim Wormold (Alec Guinness) is a British expatriate who sells vacuum cleaners in his store in Havana during the last months of the Batista regime. He lives above the store with his teenage daughter Milly (Jo Morrow), his wife having left them years ago. One day Wormold is visited by Hawthorne (Noël Coward), a not-so-secret British agent who conspicuously walks around humid Havana in a dark suit and Homburg, making it easy for his every movement to be observed by Captain Segura (Ernie Kovacs), the local strongman who apparently has deservedly been nicknamed “The Red Vulture.”

Hawthorne pretends to be interested in Wormold’s vacuum cleaners, but his real mission is to recruit Wormold to be “our man in Havana” for British Intelligence. The fact that Wormold has no experience is no hindrance; the British are so arrogant that citizenship is the only qualification that is required. Wormold is reluctant, but business is not so great and Milly has reached an age where she loves to spend money, so the financial rewards of being a secret agent are enticing. Hawthorne gives him a crash course in using rudimentary code and writing with invisible ink, after which Wormold is deemed ready to go to work. His first job is to recruit agents who are in a position to feed him information about what the Batista regime is up to.

Wormold convinces Hawthorne to pay for a country club membership where he will have access to potential agents, but he proves to be a poor recruiter and all of his efforts are rebuffed. Hawthorne’s superior in London, “C” (Ralph Richardson), is concerned that they are getting no return on their investment, and pressure is put on Wormold to produce. He confides in his drinking buddy, Dr. Hasselbacher (Burl Ives), who advises him to fake it by inventing a list of agents and producing false reports to keep the British happy. Wormold takes his friend’s advice and before long he gains a reputation in London for being a wildly successful spy. London sends him more and more money to pay for his non-existent agents, and he is able to buy Molly a horse and seriously plan to send her to school in Switzerland.

All of this is very amusing, but Wormold has overplayed his hand. He appears to be so busy that London sends him an unsolicited assistant, Beatrice Severn (Maureen O’Hara). She is determined to bring more efficiency to Wormold’s spy operation, and among other things she is going to want to meet with his agents. Further complicating matters is the fact that Captain Segura is infatuated with Milly and wants to marry her. Wormold asks her, “Do you know what they say about Captain Segura?” Her matter-of-fact reply: “I know, he beats his prisoners – but he never touches me.”

Our Man in Havana takes a darker turn during its second half, but overall it is a combination of comedy and drama that works. The cast is uniformly excellent, and those who think of Ernie Kovacs only as a very funny comedian will be impressed by his convincing portrayal of Captain Segura. The film is the third collaboration between Carol Reed and Graham Greene, the previous two being The Fallen Idol and The Third Man. This one is a pleasure and is highly recommended. I enjoyed it so much that Greene’s novel is now on my bed stand.

There is one jarring note, however. Beginning at the 1:37:21 mark there is a continuity error which momentarily took me out of the film. Without revealing too much, at night Wormold is talking to another character outside a house of ill repute (remember, everything is legal in Havana). Wormold turns to leave and walks down the street, covering at least a dozen paces, but a few seconds later he is back in the exact same spot where he was standing before he walked away. At first I thought that it must be some sort of intentional gimmick, but I played it back several times and it still makes no sense to me.

This CinemaScope film is beautifully rendered in black & white and is properly framed at 2.35:1. Although the action takes place while the dictator Fulgencio Batista was still in power, it actually was filmed two months after Fidel Castro took control of the country. The superb cinematography by Oswald Morris (The Man Who Would Be King, Fiddler on the Roof, Oliver!, The Spy Who Came in From the Cold) is sharp and detailed, with deep blacks, good contrast, and fine shadow detail, as well as intriguing camera angles. It also provides an opportunity to see Havana as it looked before decades of decay set in.

But don’t take my word for it. No one knows more about how a film should look on Blu-ray than our own Robert A. Harris, who sings the film’s praises in A few words about…™ Our Man in Havana — in Blu-ray.

The mono English soundtrack is presented in DTS HD-MA 1.0. The dialog is clear and intelligible and it is devoid of any age-related anomalies. The music by Frank Deniz and Laurence Deniz has excellent fidelity and includes a couple of catchy Cuban tunes.

The extras on the disc are the somewhat amusing original theatrical trailer and an isolated music and effects track. The trailer has a few scratches but is in reasonably good shape. The film is divided into 24 chapters.

The enclosed booklet has a typically insightful and witty essay by the esteemed Julie Kirgo. The booklet includes three still photographs and a reproduction of an original movie poster.

Our Man in Havana is a delightful film which has been given loving Blu-ray treatment by Twilight Time and Sony.

It has been issued in a limited edition of 3,000 units, so viewers who are interested in purchasing it should go to the Twilight Time website or the Screen Archives website to confirm that copies are still available.

Thanks, Rich. Looks like a another blind buy for me. I've yet to be disappointed by the many blinds I've done with TT.
Reactions: Richard Gallagher and Twilight Time
You must log in or register to reply here. 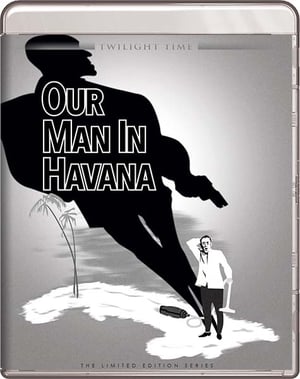