Forum List What's new Dark Style Change width
Log in Register
What's new Search
Menu
Log in
Register
Navigation
Install the app
More options
Dark Style
Close Menu
Posted on April 28, 2017 by Matt Hough
You are using an out of date browser. It may not display this or other websites correctly.
You should upgrade or use an alternative browser.
Absurd sci-fi action film is a garbled mess. 1.5 Stars

Visionary sci-fi thrillers can be either superb (The Matrix, Ex Machina) or abysmal (Battlefield: Earth); sadly, Andrew Goth’s Mindgamers (originally titled DxM) falls into the latter category: a stupifyingly garbled and uninvolving futuristic adventure mixing religious philosophy with quantum physics in the hopes of finding a common ground. What emerges is a waste of time: interestingly designed and wonderfully shot but peopled with characters we don’t care about and action that seems pointless and numbingly trite.

Five geniuses are among a group of young scientists working on a project involving brain-to-brain interfaces: group leader Jaxon (Tom Payne), rocker Dylan (Oliver Stark), brainy Rollo (Turlough Convery), willowy Agnes (Antonia Campbell-Hughes), and her warrior protector Maddie (Dominique Tipper). Hoping that their efforts will result in their being able to transfer abilities to walk and move to once athletic and now paraplegic Voltaire (Ryan Doyle), the experiments don’t really begin to be successful until the intervention of enigmatic redhead Stella (Melia Kreiling) who takes the place of one of the team’s casualties and somehow manages to make things begin to happen. But by then, the loss of a team member causes friction among the team and a rogue member begins tearing things apart just as they appeared to be on the right track.

Director Andrew Goth’s screenplay, co-written with Melia Kreiling, involves too much talk among not only our group of geniuses but also jumps back and forth in time with scientist Gabriel Kreutz (Sam Neill) who joined the priesthood so that he could tap into the extensive wealth of the Catholic Church and use it to finance his original experiments in these mind-sharing techniques. Church elders, represented by Simon Paisley Day’s Assessor, see the brain-to-brain interface as a means of mass mind control which might bring religion back into the forefront of people’s lives so the program continues to be financed. But there are dark forces at work to thwart everyone’s plans, and the film’s final third involves the dissolution of the experiment: first in an interestingly shot flash mob as the entire team of scientists perform an intricate dance en masse and then in the climactic slaughter of countless participants in a blur of kick boxing, sword wielding, bat swinging, and gymnastics. The production values are first rate (the movie was shot in Romania), and Andrew Goth knows how to frame shots in visually compelling fashion, but the narrative is so fractured and unappealing and our identification with the characters so nonexistent that nothing that occurs matters in the least.

Sam Neill is wasted as the determined scientist-turned-priest foiled by his own overreaching ambition, but he gives this claptrap his all, and so do the younger members of the cast. The focus is basically on Tom Payne’s Jaxon as team leader and Melia Kreiling as a kind of redheaded Angel of Death, but Dominique Tipper’s Maddie Romero gets quite a workout during the movie, and Oliver Stark and Turlough Convery share a slow dance before the flash mob sequence that is kind of sweet. Antonia Campbell-Hughes as a kind of albino pixie makes very little impression, but parkour expert Ryan Doyle has solid screen charisma as the debilitated Voltaire. Predrag Bjelac as Mosca and Simon Paisley Day as the Assessor have presence even though their characters are rather sternly confusing.

The film is presented here at 2.40:1 and is offered in 1080p resolution using the AVC codec. Typically, the movie is very disappointing, but the transfer is reference quality all with way with razor sharpness which gives us great details in facial features and costumes. Color is beautifully controlled but vibrant at all the right moments and with very believable skin tones. Black levels are among the best to be seen in a recent transfer. The movie has been divided into 20 chapters.

The DTS-HD Master Audio 5.1 sound mix uses every possible channel for its interesting sound design. Dialogue gets a multi-channel approach and is quite effective with voices coming from behind or moving between channels as action shifts from one room to another. The LFE channel gets almost constant usage with rumbling bass adding a bit of tension to the on-screen action. The music by Ben Fowler also gets the full surround treatment, and split effects often pan across and through the soundstage especially during the latter reels of extended activity.

A complete misfire even if it is handsomely appointed and expertly shot, Mindgamers wastes a viable science fiction concept on too much talk and some absurd, jumbled action scenes that leave its audience in a state of complete indifference. 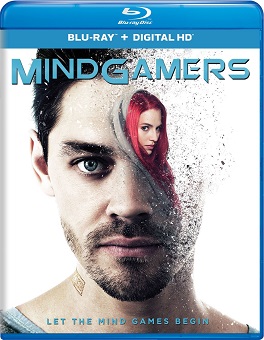