Posted on April 6, 2019 by Josh Steinberg
An unusual blend of western and noir, with a CinemaScope flare. 4 Stars

Allan Dwan’s 1957 production of The River’s Edge is an unusual film, combining elements of film noir (rendered here in color), with the sensibilities of a contemporary western and the visual expansiveness of CinemaScope. It’s a small story with characters and dilemmas worth looking at on a larger canvas.

The River’s Edge is an unusual film that doesn’t quite fit neatly into a single genre, but director Allan Dwan is able to blend facets of film noir, the contemporary western genre, and the widescreen CinemaScope format to tell a fascinating story. It begins simply enough: Ben (Anthony Quinn) and Meg (Debra Paget) are a newlywed couple trying to build a cattle ranch in New Mexico. While Ben has an aptitude for this kind of life, Meg seems ill equipped for the sacrifices that this kind of rustic living entails. As we’re left wondering why Meg would have signed up for this in the first place, the film cuts to a mystery man named Nardo (Ray Milland) arriving in town in a convertible, looking for his girl who’s run off with another man. It soon becomes apparent that Meg is that girl, someone who used to live a life of crime. Both had served time in jail, but Meg got out first and took the security that life with Ben offered. When Nardo catches up with Meg, he quickly drags her back into his criminal ways, but they initially try to keep Ben from knowing. Instead, Nardo shows up on Ben’s doorstep as a fugitive, demanding Ben’s help in arranging passage to Mexico, where the law can’t reach him. But as Ben begins the journey to Mexico with Meg and Nardo, the truth of the situation becomes apparent, and the presumed loyalties between the characters may not be what is expected.

Working within a spare 87 minutes, the script (by Harold Jacob Smith and James Leicester, from a short story by Smith) is primarily concerned with the three main characters, and breaks up the time and characterizations fairly evenly between them. Dwan’s direction is efficient, as he coaxes unshowy and believable performances from each of his leads while keeping the story moving along. Quinn here must suppress some of his natural charisma to portray a rancher that Meg would have second thoughts about settling down with, and he’s able to do just that. Meanwhile, Milland is able to summon a fiery hold on his own character that both keeps Meg entranced while sending out alarm bells to everyone he encounters. Paget, too, must run the gamut from a character who at first only wants what’s easy, but who comes to see that there’s more to life than that. Each of these characterizations is wholly successful.

This being a film that owes quite a bit to the noir genre, characters will face brutal, spirit-crushing obstacles along the way. The most interesting one might be in a sequence which occurs about two-thirds through the film, when the trio finds themselves seeking shelter from a storm. With Meg’s character in danger of infection from a wound she suffered and the wet cold that they’re trapped in, the trio faces a hard choice. A little bit of boiling water could stave off gangrene, but the only tinder that could be used to start a fire is money: the money that Nardo has paid Ben for the safe passage, and the rest that Nardo is counting on to bankroll his life in Mexico. Though it is clear to Ben at this point that Meg has betrayed him, he doesn’t hesitate to burn his own share of the money on the chance that it could save her life. This stunning sequence not only reveals the true extent of Ben’s character but serves as an eleventh hour catalyst for Nardo to silently reevaluate his own choices and direction.

The River’s Edge is presented in its original aspect ratio of 2.35:1, preserving the film’s original CinemaScope framing. The image is perfectly stable, and clear of any dirt, debris or other age-related artifacts. Sharpness and contrast are generally pleasing, and if the movie occasionally appears to be slightly lacking in detail, this is almost certainly an artifact of the early CinemaScope lenses rather than a fault in the transfer. This is a film that effectively uses photography to suggest mood and character relationships, and that effectiveness is preserved on this disc.

Two audio options are present on the disc, both in lossless DTS-HD MA. The disc defaults to a 2.0 track which appears to be one of Fox’s fake stereo tracks from the DVD era. There’s nothing wrong with it, per se, but stereo separation is unimpressive and the track takes on a slightly weaker sound. Much better is the mono option (labeled as 1.0 in the menu, but actually a 2.0 presentation of the monaural track), which has a very full sound. Dialogue is well-recorded and mixed in the track, and the score by Louis Forbes sounds particularly rich.

Isolated Music & Effects Track – The score by Louis Forbes (along with the film’s sound effects) are presented in the lossless DTS-HD MA format.

Audio Commentary with Film Historians Alain Silver and James Ursini – This is a lively, enjoyable commentary with the two speakers sitting together and discussing a film which is clearly among their favorites. A good blend of film analysis and film history.

The River’s Edge is a surprisingly deep film, which blends elements of the film noir and contemporary western genres, set on the biggest CinemaScope canvas, but ultimately is more concerned with story than action. Featuring above-average characterizations, and great performances by the leading trio of Ray Milland, Anthony Quinn and Debra Paget, it’s a surprisingly deep film masquerading as a b-movie programmer. Twilight Time’s presentation carries over a great commentary from Fox’s earlier DVD edition, while adding an isolated score track and their typical high quality presentation and packaging. 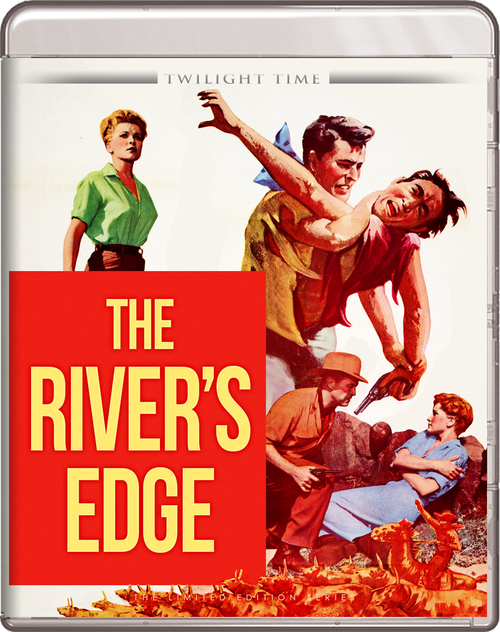