It seems like every few years, Disney finds a need to re-issue the beloved holiday mashup The Nightmare Before Christmas, adding something new to the release to try and make it stand out. But when Disney adds, they tend to take something away.

As a movie, The Nightmare Before Christmas has been reviewed several times here on Home Theater Forum, so much so that there’s not much else to be said after reading Neil Middlemiss’ DVD and Matt Hough’s Blu-ray reviews of the 2008 release. I do remember seeing this beloved classic for the first time on its opening night at the Edwards Big Newport back in October of 1993 on its massive 71-foot screen and Dolby Digital 5.1 sound. Although I had seen stop motion animation before from the likes of Aardman Animation, Will Vinton, and the effects work of Ray Harryhausen, but nothing could match the quality of the animation in Nightmare by Henry Selick and his team, plus the catchy songs and music by Danny Elfman, including the show stopper What’s This. It’s hard to believe that if it weren’t for this film, we probably wouldn’t have Wallace & Gromit in The Curse of the Were-Rabbit, Coraline, and Early Man.

There were some complaints about the previous Blu-ray edition suffering from an overuse of DNR in a few spots, and, quite honestly, I never noticed them in that 2008 release, which looked exceptional to my eyes at the time, and still looks that way today. This new 2018 release appears to be, at the very least, a new encode, as I doubt Disney would create a new 4K transfer after all the restoration work that was done prior to its 3D conversion in 2006 and then likely creating a 2D and 3D digital intermediate in 2K resolution. The 2008 release had a bitrate that fluctuated between less than 2 Mbps to as high as 39 Mbps, usually hovering just under 30 Mbps. This new release rarely dips below 25 Mbps, maxing out at 38 Mbps, and like the previous release, hovering just under 30 Mbps. The differences in the two releases are minimal to most eyes, with this new release appearing just a tad slightly sharper, possibly from the higher overall bitrate. Colors are just as vibrant and blacks are just as deep and inky.

While the 2008 release featured a Dolby TrueHD 7.1 track (that defaulted to lossy Dolby Digital 5.1), this new release features a DTS-HD Master Audio 7.1 track and adds in a Dolby Digital 2.0 Descriptive Audio track. Much like the video, it is hard to distinguish any major differences between the TrueHD 7.1 track on the 2008 release versus the DTS-HD MA 7.1 track on this 2018 release. They are nearly identical to these ears, so I’m just going to quote what Matt Hough had to say in his 2008 Blu-ray review, the “7.1 audio mix makes full use of every one of those channels in a soundtrack that is almost never at rest. You can hear individual instrumentation in the orchestrations for the songs clearly in separate channels, and sounds are constantly placed in channels to give a wide range to the soundfield. Hearing voices echoing from channel to channel, and, for example, fired missiles zooming through the room is constantly thrilling. There are nice bass effects in the LFE channel, but they aren’t overdone. Again, for an animated film of this vintage, this is a reference quality creation.”

At first, it looked like Disney was just adding a Sing-Along subtitle track with the option to pick individual songs to what was included in the 2008 release. I really wish that were true. Missing from that 2008 release are the Introduction by Tim Burton and the option to view the Haunted Mansion Tour as a stand alone feature. Also still missing is the original full-length audio commentary by Henry Selick from the first DVD release in 2000.

Sing-Along Mode: When selecting Play from the Main Menu, the viewer has the option to watch the film with a Sing-Along subtitle track.

Song Selection: Under Special Features, the viewer has the option of watching either individual songs, or all eleven songs at once. Selections include This is Halloween, Jack’s Lament, What’s This?, Town Meeting Song, Jack’s Obsession, Kidnap the Sandy Claws, Making Christmas, Oogiie Boogie’s Song, Sally’s Song, Poor Jack, and Finale/Reprise.

What’s This? Jack’s Haunted Mansion Holiday Tour (1080i; 37:24): Disney Imagineers discuss and take us on a tour of the redressing of Disneyland’s Haunted Mansion ride during the last three months of the calendar year with a Nightmare Before Christmas theme. Missing on this version are the stand alone virtual ride option with optional trivia track.

Vincent (480i; 5:54): An early black and white stop-motion animated short directed by Tim Burton and Rick Heinrichs, also a tribute to Vincent Price.

The Making of “Tim Burton’s The Nightmare Before Christmas (480i; 24:44): The original behind the scenes documentary from the 2000 DVD release.

Audio Commentary with Tim Burton, Director Henry Selick, and Music Designer Danny Elfman: Edited from three different recorded tracks (Selick’s sounds like it was culled from the 2000 DVD commentary), the threee men discuss the creation of the film and its production.

My overall score may be a bit deceiving. Video and Audio are almost identical to the previous 2008 release, and the only addition is a Sing-Along subtitle track, but this release is missing some features, and then there are the interlacing issues on Frankenweenie. If you already own the 2008 release, there really is no need to purchase this one. For those who have never purchased or upgraded from the 2000 DVD, try to track down the 2008 release first and purchase this as a last resort. 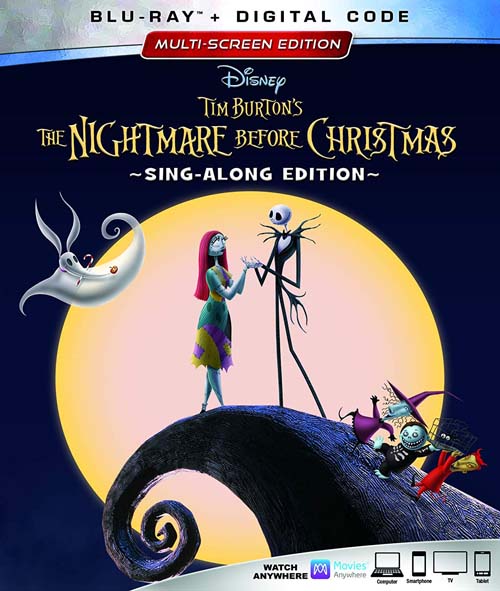