By the time 1968 rolled around, the Spaghetti Western was firmly established by the success that Sergio Leone had with his Dollars Trilogy worldwide and the innumerable imitators that it spawned. Lost amid that spawn was Franco Giraldi’s A Minute to Pray, a Second to Die, an atmospheric take on an old Hollywood trope – the gunslinger with a past – done with a decidedly Italian twist. Resurrected over the years on home video, it now comes to Blu-ray from Kino Lorber via their Studio Classics line, ready to be reappraised.

In the West, no one has a quicker draw of a gun than Clay McCord (Alex Cord), the notorious outlaw. However, when he starts suffering paralytic seizures that – at times – disable his ability to shoot a gun, he believes that his time is running out and will end up an epileptic like his father. While seeking refuge in the barricaded town of Escondido, he learns of the offer of amnesty made by the governor of the territory (Robert Ryan) through the town marshal (Arthur Kennedy) of the nearby town of Tuscosa; while intrigued by the offer, he’s suspicious, thinking that there may be an ulterior motive to the amnesty. When McCord’s seizures become more frequent and the town boss of Escondido has his eyes set on McCord, he might just take up the governor on his offer, but will it be enough to spare his life?

As it was mentioned in the opening of this review, A Minute to Pray, a Second to Die was lost amid the sea of Spaghetti Westerns that were made and released in the wake of Leone’s success with the genre; when the movie was picked up by Cinerama Releasing Corporation, nearly 20 minutes was trimmed from the movie prior to release, resulting in a movie that didn’t quite mirror the expectations of the filmmakers or the audience when it was released to theaters. However, that unfortunate outcome really doesn’t begin to show what critics and audiences missed out on; director Franco Giraldi (in what would be his last of 4 efforts in the genre) subverts an old Hollywood Western trope (the outlaw gunslinger trying to go straight) Italian style with the help of two screenwriters more familiar with horror fans, Louis Garfinkle (writer of I Bury the Living and Oscar nominee for his work on The Deer Hunter) and Albert Band (also of I Bury the Living fame and father of Empire Pictures and Full Moon founder Charles Band and composer Richard Band). Cinematogapher Aiace Parolin makes effective use of the Spanish countryside (filling in for the New Mexico Territory) and composer Carlo Rustichelli delivers a haunting score on par with that of his contemporary, the one and only Ennio Morricone.

Alex Cord makes for an effective lead as the trouble McCord; whereas Clint Eastwood’s Man with No Name seemed to have a superhuman quality about him, Cord makes his antihero appear all too human – which is not a bad thing to say at all. Veteran character actor Arthur Kennedy casts a strong impression as the Tuscosa marshal caught up in McCord’s dilemma, eventually having to help protect him during the climax of the movie. Though billed as a “guest star”, Robert Ryan has a meaty character part as Governor Lem Carter, a man who backs up his philosophy with a mean right hook and a rifle; the legendary Hollywood tough guy makes his part about quality rather than the quantity of time he has on the screen. Other notable performances include Spaghetti Western stalwart Mario Brega as the Escondido strongman with an axe to grind with McCord, Nicoletta Machiavelli as the young Escondido girl who briefly becomes McCord’s love interest, and in small roles, John Bartha, Jose Canalejas, Antonio Molino Rojo, Lorenzo Robledo, and Aldo Sambrell, all familiar faces in the genre.

Taken from a 4K of the original camera negative of the domestic US cut of the movie, the Blu-ray surpasses the previous MGM DVD in terms of visual quality. For the most part, grain structure is strong and film like while colors are vivid and steady, with even skin tone and crushed blacks. There’s some scratches and speckling, but not enough to detract from viewing and there’s minimal instances of tearing, dirt and dust as well.

The original mono soundrack is presented on the Blu-ray in a DTS-HD Master Audio track. Dialogue is strong throughout and Carlo Rustichelli’s score has solid fidelity and range with minimal instances of crackling, popping, or hissing. Another improvement over the MGM DVD.

Audio Commentary by Alex Cox – The filmmaker and author of the book on the history of the Spaghetti Western, 10,000 Ways to Die, speaks about the movie’s convoluted production and its cast and crew. Laid back yet informative, this is a nice complementary track to the movie.

Extended International Ending (5:24) – Presented in standard definition, the original downbeat ending of the movie before editors trimmed it for American release. The option to play it with commentary by Alex Cox is also available.

While not commonly mentioned alongside the like of The Good, the Bad and the Ugly, Django, or Once Upon a Time in the West when one talks about the greatest Spaghetti Westerns, A Minute to Pray, A Second to Die is still one of the better examples of the genre, done with great atmosphere and style along with some solid substance. Kino’s Blu-ray release represents another solid offering from the label, giving those fans of the movie and those curious about it a chance to reappraise a hidden gem in the genre. 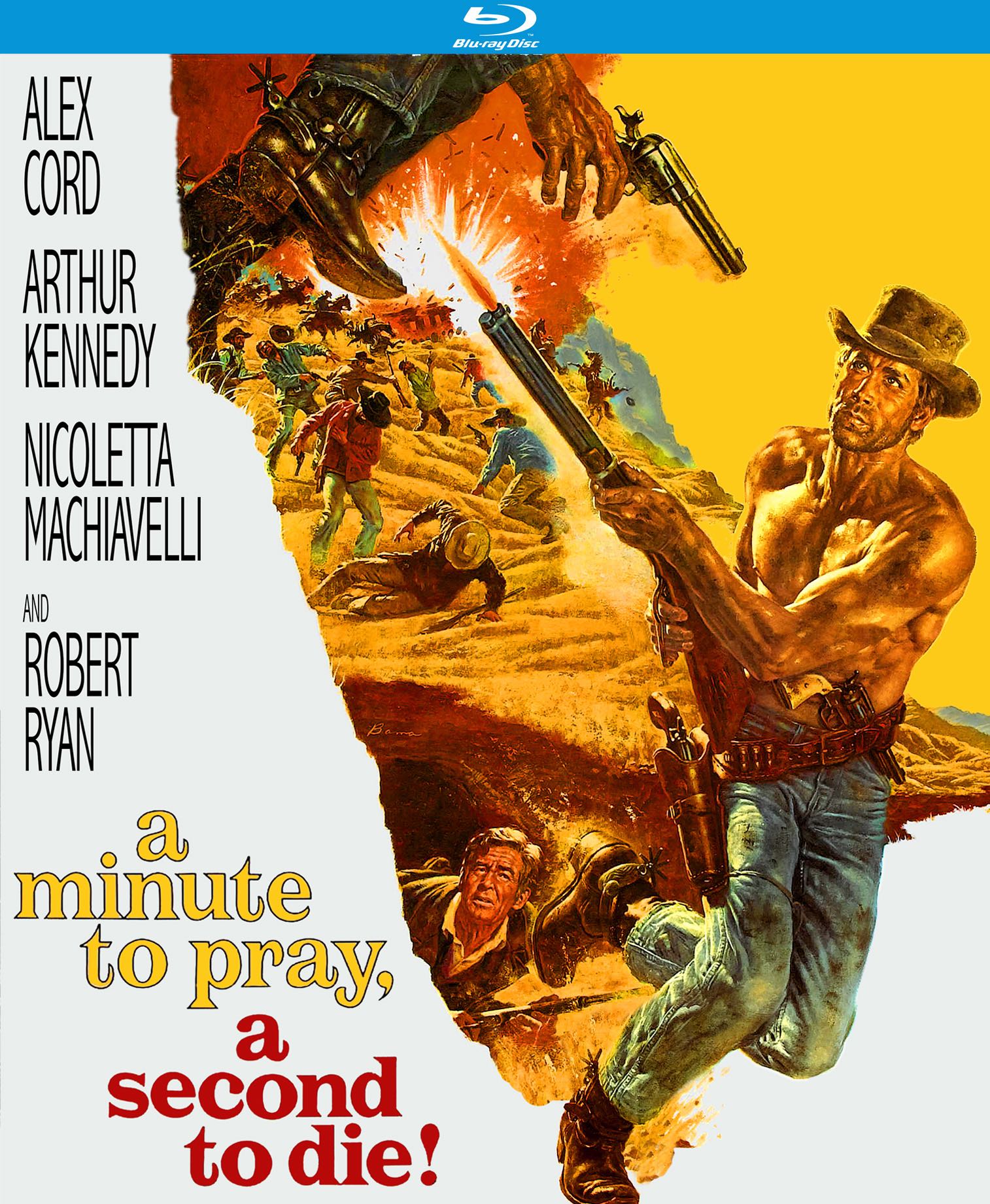