Forum List What's new Dark Style Change width
Log in Register
What's new Search
Menu
Log in
Register
Navigation
Install the app
More options
Dark Style
Close Menu
Posted on April 19, 2019 by Todd Erwin
You are using an out of date browser. It may not display this or other websites correctly.
You should upgrade or use an alternative browser.
A Timeless Classic 4.5 Stars

To commemorate the film’s 35th anniversary, Sony has released the 1984 classic The Karate Kid on 4K UHD Blu-ray with a gorgeous new transfer.

When his mother Lucille (Randee Heller) is offered a new job in Los Angeles, she and her son Daniel (Ralph Maccho) drive cross country, moving into a rundown apartment building in Reseda. He is greeted on moving day by neighbor Freddy (Israel Juarbe), who invites him to a beach party as a way of saying goodbye to summer just before school starts. At the party, Daniel meets Ali Mills (Elisabeth Shue), and the two hit it off until her jealous ex-boyfriend Johnny (William Zabka) crashes the party with his gang on motorcycles, assaulting Daniel. At school, he sees Ali and they continue to hit it off on the soccer field, until Bobby (Ron Thomas), one of Johnny’s gang members, intentionally trips Daniel, and the two have a short scuffle on the filed before the coach breaks it up and send Daniel home. The next day, Ali meets up with Daniel in the cafeteria where Daniel buys her lunch. Later that evening, while riding his bike home, Johnny’s gang forces him off the road, tumbling down a hill and damaging the bicycle. The apartment building’s maintenance supervisor, Mr. Miyagi (Pat Morita), has been watching Daniel and during the night fixes the bicycle. The two strike up a friendship of sorts, with Mr. Miyagi becoming Daniel’s mentor and father figure, agreeing to train him in the art of karate so that Daniel can face Johnny at the karate championship and earn respect and end the bullying.

Watching the original The Karate Kid today, it has become a timeless classic of overcoming bullies using untraditional methods (the only thing really dating the picture is its very 1980s MTV-inspired soundtrack). Pat Morita is the real star here, deservedly receiving a Best Supporting Actor nomination from the Motion Picture Academy. His character brings a lot of warmth and humor to the film, with many of his lines still part of pop culture today, such as “Wax on, wax off.” Macchio and Shue have a noticeable chemistry here, and the script by Robert Mark Kamen (Gladiator, Lethal Weapon 3) doesn’t play up the rich girl poor boy angle too much other than adding another obstacle for Daniel to overcome. Director John G. Avildsen’s (Rocky) keeps the film moving at a nice pace, telling a heartwarming story of a young underdog who overcomes the obstacles in front of him.

Sony is one of the few studios who really continue to release catalog titles on 4K UHD Blu-ray with care and workmanship. The Karate Kid is presented here very much as it likely did in a well-calibrated theater during its original theatrical run in a 2160p HEVC-encoded transfer with HDR10 that preserves the film in its original 1.85:1 aspect ratio. Film grain is noticeable but organic, never really becoming distracting, although the opening title montage of Daniel and his mother driving cross country has the heaviest amount of grain. Colors are bold and vivid, but never appearing artificially boosted. Contrast is exceptional with deep blacks and shadow details, giving the night time scenes much more depth than the previous Blu-ray release. Detail is increased rather dramatically (this is a true 4K transfer, as the movie was shot and completed on 35mm film), so much so that the filament holding the fly that Miyagi is trying to catch with chopsticks is very noticeable now.

The Karate Kid was originally released theatrically in Dolby Stereo (with matrixed surrounds), and was upgraded to a 5.1 mix with its later DVD and Blu-ray releases. As with the majority of Sony’s 4K UHD Blu-ray releases, The Karate Kid has been given a new Dolby Atmos mix, as well. To be honest, I went into this mix with rather low expectations – this was a low budget studio production originally mixed for stereo surround playback on optical analog equipment. It may not be demo-worthy, but it sure did surprise me, providing a much wider front soundstage and providing the music with much more immersion. Bass response is much stronger, also, without becoming too boomy. Dialogue is clear and understandable throughout. The previous 5.1 and 2.0 mixes have also been included here in DTS-HD MA.

The UHD disc contains two new features, while the rest reside on the included Blu-ray release from 2010.

Cobra Kai Trailer (1080p; 2:36): This one is buried as an Easter Egg (wow, I guess some studios still do these) in the languages menu.

Blu-ray Disc:
Blu-Pop: Watch the movie with pop-up trivia, interviews, and more. Requires secondary audio to be turned on in your player’s settings.

Director, Writer, and Cast Commentary: Director John G. Avildsen, writer Robert Mark Kamen, and actors Ralph Macchio and Pat Morita have a lively discussion on the making of the film.

Beyond the Form (480i; 13:03): Martial Arts Choreographer Pat E. Johnson discusses the art and spiritual philosophies of karate, the use of karate in the film, and how the film brought more attention to the sport.

East Meets West: A Composer’s Notebook (480i; 8:17): Composer Bill Conti discusses the score for the film.

The Karate Kid is a timeless story of a boy who learns the disciplines of karate in order to overcome a gang of bullies. Sony’s 35th anniversary 4K UHD Blu-ray release features a major upgrade over the previous Blu-ray edition plus a new retrospective feature. Recommended.

I am definitely going to pick up this title on 4K UHD Blu-ray!

Dave Moritz said:
I am definitely going to pick up this title on 4K UHD Blu-ray!
Click to expand...

I will keep that in mind but many of the titles I want to buy I actually want on disc and want to own them and support the format. Sure the $7.99 price is attractive but I still find 4K discs to be superior to the digital versions.

Dave Moritz said:
I will keep that in mind but many of the titles I want to buy I actually want on disc and want to own them and support the format. Sure the $7.99 price is attractive but I still find 4K discs to be superior to the digital versions.
Click to expand...

I got that beat. I bought the HD digital from iTunes for $4.99 that has now upgraded to 4K and then my sister gave me the 4K disc for a birthday present in which I redeemed that code too.

Robert Crawford said:
I got that beat. I bought the HD digital from iTunes for $4.99 that has now upgraded to 4K and then my sister gave me the 4K disc for a birthday present in which I redeemed that code too.
Click to expand...

A steal for such a gorgeous looking film.

Robert Crawford said:
I got that beat. I bought the HD digital from iTunes for $4.99 that has now upgraded to 4K and then my sister gave me the 4K disc for a birthday present in which I redeemed that code too.
Click to expand...

Get him a body bag! Yeahhh!

A great little movie. All my children loved it, even the two girls who hated 'action' or 'combat' movies.

Ok I purchased a digital movie and picked up Karate Kid 4K for $8.99 not as good of a deal as you got Robert, ROFL.

Dave Moritz said:
Ok I purchased a digital movie and picked up Karate Kid 4K for $8.99 not as good of a deal as you got Robert, ROFL.
Click to expand...

I could sware it was $8.99 when I purchased it. But looking on my paycard it shows $7.87 weird. Will check out the quality tomorrow.

I do not know ether but here is what I am seeing. Purchased two other movies for $9.99 but Karate Kid shows $7.87.

Here is another source to check for price drops that you can do on your computer.

Is there a logical reason the HDR format/specification (HDR10/HDR10+/Dolby Vision) is not included in the Disc Information block?

That is the first place where I think 110 out of 100 people would prefer to see it. Instead one needs to read the video block.
You must log in or register to reply here. 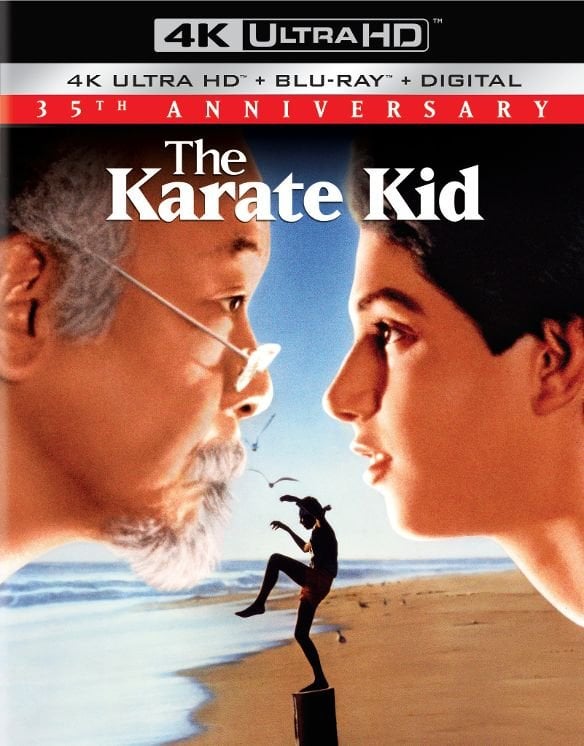