Forum List What's new Dark Style Change width
Log in Register
What's new Search
Menu
Log in
Register
Navigation
Install the app
More options
Dark Style
Close Menu
Posted on February 23, 2021 by Timothy E
You are using an out of date browser. It may not display this or other websites correctly.
You should upgrade or use an alternative browser.
The Croods return in The Croods 2 with new neighbors and newer problems. 4 Stars

The Neanderthal family meets cute with Cro-Magnon neighbors in The Croods: A New Age(2020), the theatrical follow up to The Croods(2013).   This sequel gives us more of the same of the original, with enough new elements to keep things fresh.  The 3D version is the disc to get if you are 3D capable.

The Croods meet the Bettermans(get it?) in The Croods: A New Age(2020).  The Neanderthal Croods family struggles to survive in an ever-changing world and finds a higher standard of living with the Cro-Magnon Betterman family.  The Bettermans have developed technology reminiscent of Gilligan’s Island to create their own paradise in a prehistorick world.  Guy(Ryan Reynolds) turns out to be an old acquaintance of the Bettermans, and Eep(Emma Stone) discovers jealousy when Guy is reunited with his old playmate Dawn(Kelly Marie Tran), who happens to be the Bettermans’ daughter.

Paradise unchallenged would make for a dull story, so the Croods violate their primary directive for preservation of their near perfect world, in a plot element that resonates with the story of the Garden of Eden, and which generates a quest for the Croods and the Bettermans to preserve their existence and restore the status quo.  Peter Dinklage(Game of Thrones) and Leslie Mann(The 40-Year-Old Virgin) give life to Phil and Hope Betterman, with Nicholas Cage, Catherine Keener, Clark Duke, Ryan Reynolds, Emma Stone, and Chloris Leachman returning as voice actors.  The CGI animation is hyperkinetic and lively, and the plotline fills out a pleasant hour and a half in what is one of the final roles for screen legend Chloris Leachman, who passed away after the brief theatrical release of the film.  The Croods: A New Age is a fun and diverting confection in a time of limited new theatrical releases come to home video.

The Croods: A New Age is presented on 3D Blu-ray in its original 2.35:1 screen aspect ratio.  The vibrant variegations of hues are served well in 3D, with all of the fine detail that can be created in CGI animation and presented in its zenith.  The Croods: A New Age in 3D has its share of flying objects protruding out of the screen, but is more prominent in effective use of providing depth from foreground to backgrounds.  I have seen the film first on 4K UHD and then on 3D Blu-ray, and it is a better movie in 3D, if you like that sort of thing, with multiple planes of depth to make the film more immersive and the colorful prehistoric world inhabited by the characters.

The English Dolby Atmos audio presents a rich sound wall with directional audio deployed selectively and effectively throughout the film.  Dialogue is usually audible in the mix, and the infectious score composed by Mark Mothersbaugh is allowed to soar.

Special features are included on the 3D disc, and include all of the following(in 2D):
Dear Diary: World’s First Pranks(2:54):  New short highlighting Eep and Dawn in old school animation style.
Family Movie Night:  Little Red Bronana Bread(3:39):  Second of 2 new shorts featuring a camera obscura presentation narrated by the voice actors.
Gag Reel(1:51):  Ryan Reynolds and other voice actors cracking up in the recording studio.
To: Gerard(7:32):  A DreamWorks animated short unrelated to The Croods, this is Taylor Meacham’s Academy Award nominated 2020 short.
Deleted Scenes(23:07):  Director Joel Crawford introduces 8 different deleted scenes, which are presented in storyboard format accompanied by the voice actors reading their lines.
The Croods’ Family Album(8:24):  Director and voice actors talk about The Croods: A New Age.
The Evolution Of…(10:17):  Voice actors and producers talk about The Croods film franchise.
How To Draw: Caveman Style(29:05):  Story artist Heid Jo Gilbert demonstrates how to draw each of the main characters in the film.
Famileaf Album(2:58):  Directions for how children (or adults) may create their own Famileaf Album at home like the one in the film.
Stone Age Snack Attack(5:52):  Adult supervision is suggested for creation of these snacks.
Feature Length Commentary:  Director Joel Crawford, producer Mark Swift, head of story Januel Mercado, and editor Jim Ryan provide an engaging feature length commentary during the film.
The 3D Blu-ray package includes a standard Blu-ray of the film and a paper insert with validation code for digital copy via the Movies Anywhere App.

The Croods: A New Age 3D is a welcome diversion during a time when there is a dearth of new releases of feature films.  If nothing else, the film gives us one of the final performances of screen legend Chloris Leachman.  The video and audio presentation of the feature are excellent, and there is a wealth of special features intended for all ages.  The featurettes on drawing the characters and demonstrating creation of snacks and arts and crafts at home is well-timed for many families remaining at home during the pandemic.  (Just remember adult supervision is recommended for these!)  The Croods: A New Age doesn’t necessarily reinvent the wheel, but in fairness, the wheel may not have been invented by that time.  The Croods: A New Age on 3D Blu-ray is recommended for all audiences, and most welcome when most major studios have abandoned the 3D format. 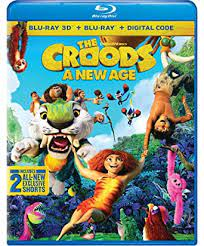