During the 1960’s, when cinema was undergoing a change in dynamics, one of its leading stars – Marlon Brando – was stuck in a bit of a rut. For much of the decade, he appeared in movies that weren’t really well received by either critics or audiences, although some of them have undergone a reevaluation in later years. One of these efforts, The Appaloosa, has been picked up by Kino Lorber and released on Blu-ray as part of their Studio Classics line.

Along the US-Mexico border in 1870, wandering hunter Matt Fletcher (Marlon Brando) has returned home with his prized Appaloosa horse in hopes of starting a horse ranch alongside his close friend Paco (Rafael Campos). However, those plans change drastically when the notorious bandit Chuy Medina (John Saxon) steals his prized horse, sending Matt on a course of vengeance. Along the way, he’s subjected to torture and humiliation by Medina and his band of desperadoes but also garners the affection of Chuy’s abused woman, Trini (Anjanette Comer). It all comes to a climax where one will walk away with Trini, the Appaloosa, and his life.

Made during the period where Sergio Leone was re-writing the rules of the Western in Italy, The Appaloosa can be seen as a bridge between the more classic style of the genre and the harder, grittier edge that the genre would take in the next few years. Director Sidney J. Furie, who made his Hollywood debut following the successes of The Leather Boys (1964) and The Ipcress File (1965), brought his own distinctive visual style to the material and delivers a decent, if somewhat leisurely pace to the proceedings. If there’s one real criticism to the movie, is that it lacks some real action sequences. That can be attributed to the fact that much of those sequences that were in the source material (a novel by Robert McLeod) were not carried over to the script due to the objections of Brando, who complained about how they portrayed the Indians in a negative light. That aside, there are still some notable moments in the movie, especially the arm wrestling scene involving a deadly scorpion awaiting the loser, but the movie is more dialogue driven than action driven compared to most other Westerns around this time.

As Fletcher, Marlon Brando essentially gives his own take on the mysterious loner subtype that populates the genre (like he did with One-Eyed Jacks a few years prior); it’s one of his more solid performances during the decade when his star wasn’t shining as brightly as it did in the past. In the role of the notorious and sadistic Chuy, John Saxon essentially walks away – or rides off, if you prefer – with the movie; he received a Golden Globe nomination for his performance and later considered it one of his favorite roles in his varied career. Playing the part of Chuy’s “lover”, Anjanette Comer makes for a luminous and somewhat sympathetic presence; it would be a notable role in a career that declined rapidly at the start of the 1970’s. Other notable appearances include Emilio Fernandez (later to be known for his appearances in Sam Peckinpah’s The Wild Bunch and Bring Me the Head of Alfredo Garcia) as Chuy’s right hand man, Rafael Campos as Paco, Fletcher’s close friend and confidante, Miriam Colon as Paco’s wife, and Frank Silvera as the ill-fated old peasant who helps Fletcher and Trini.

The original 2:35:1 aspect ratio is preserved on this release in its full Techniscope glory. Colors are strong with even skin tones, blacks that are non-corrupted, and fine details coming through strongly with minor instances of fluctuation, fading, and age related artifacts such as dirt, dust, speckling, or tears. Film grain is organic, making this transfer a major improvement over previous home video incarnations, truly capturing Russell Metty’s beautiful cinematography for all to see.

The film’s original mono soundtrack is presented on a DTS-HD Master Audio track for this release. Frank Skinner’s score has some solid ambiance and fidelity, while the sound mix is faithfully rendered along with clear dialogue. Very minor instances of age related artifacts like popping, crackling, or hissing make this another improvement compared to previous home video editions.

Commentary by film historians Lee Pfeiffer and Paul Scrabo – This informative and conversational track goes over details of the production as well as some of the highlights of those involved, notably Marlon Brando as well as some of his more mercurial moments during the decade.

While it was mostly unappreciated by critics and audiences during its initial release, The Appaloosa is still a fairly decent Western awaiting reappraisal. Kino Lorber’s Blu-ray release aids in the rediscovery, with high marks in both audio and visual presentation to go with an informative commentary accompanying the movie. Recommended for Brando aficionados, Western fans, and those looking to upgrade their previous home video copy of the movie. 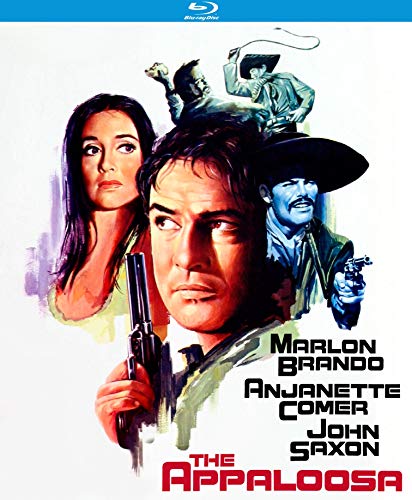