The searing Peckinpah drama returns to Blu-ray with an additional commentary. 4 Stars

A labor of love for its director, Sam Peckinpah’s Bring Me the Head of Alfredo Garcia is a difficult movie to love for some of the rest of us.

A labor of love for its director, Sam Peckinpah’s Bring Me the Head of Alfredo Garcia is a difficult movie to love for some of the rest of us. It’s messy in its production, it’s over-the-top violent in its narrative, and it’s unsatisfying in its love story. Nevertheless, the film does slowly but surely cast a spell that grips and doesn’t let go, and that certainly qualifies as some kind of achievement. The movie has grown in stature among the film community over the years since its desultory original release, and it now stands for many as one of the director’s more notable achievements. Twilight Time has now brought the Blu-ray back into print with an encore edition to its 2014 release. A new commentary supplements the other bonus features, all of which have been brought forward from the previous release.

A wealthy Mexican father (Emilio Fernandez) whose unwed daughter is now pregnant by wastrel Alfredo Garcia offers a million dollar bounty to anyone who can bring him the head of his daughter’s now-missing lover. Private eyes Sappensly (Robert Webber) and Quill (Gig Young) engage cantina pianist Bennie (Warren Oates) to track down Garcia since his prostitute girl friend Elita (Isela Vega) most likely knows his whereabouts. She does know where he is and agrees to help knowing he’s already dead and buried but gets cold feet once she realizes they’ll have to rob the grave to be able to earn the money Bennie has been promised. On the way to the gravesite, the couple encounter malevolent bikers (Kris Kristofferson, Donnie Fritts) and another pair of bounty hunters (Chalo González, Jorge Russek) who are willing to do anything to win the prize money.

The screenplay by Gordon Dawson and Sam Peckinpah (from a story co-written by Peckinpah and Frank Kowalski) takes a long time to rev up its momentum as we get to know the major players in this quest. There are lots of character quirks that have been built into the scenario (Bennie wears his sunglasses to bed, Elita is infested with crab lice, Sappensly and Quill don’t suffer fools gladly), but the film’s action sequences are pretty much planted in the film’s second half which might cause some fans who crave Peckinpah’s brand of  stylized, explosive violence to get antsy with the first half of the film (even a rape takes on more pastoral than violent trappings courtesy of guest star Kris Kristofferson). But when the violence comes, it’s pretty much what the director’s admirers expect with almost three dozen bodies hitting the ground (in slow motion, natch) before the film reaches its end. But those who admire film technique might find sloppy continuity and some abrupt flash cuts rather bothersome, and the big romance between the film’s top-billed stars (and the motivation for all that happens in the film’s final third) doesn’t really set off any sparks and seems rather banal.

Warren Oates’ first romantic leading man role finds the actor in fine form even if the script saddles him with a lot of mumbled dialogue he must mutter when there is no one else in the frame for him to talk with turning his role by the last quarter of the movie into almost a one-man show monologue. Isela Vega tries her mightiest to stir up some chemistry with her leading man, but their intimate scenes fall slightly flat (even though she takes a magnificent tumble head over heels out of bed early in the movie), and her resignation that she must submit to the rape later on is rather touching. Gig Young, Helmut Dantine, and Robert Webber (who has a memorable moment clubbing a prostitute senseless with his elbow when she gets too near his privates) make the most of their moments as private detectives who are out for the big bucks (they had offered Bennie a paltry $10,000 to do their dirty work for them). Emilio Fernandez is forceful as the paterfamilias whose title command initiates the events of the movie.

The film’s original 1.85:1 theatrical aspect ratio is faithfully delivered in a 1080p transfer using the AVC codec. At its best, the image is strikingly sharp, clear, and richly colorful with very tan flesh tones. But there are inconsistencies with contrast, and the film is riddled with white specks throughout (though there are no major bits of debris or damage). Black levels are variable from milky gray to pitch black, and sometimes details are lost in the shadows. The occasional yellow subtitles are always easy to read. The film has been divided into 24 chapters.

The DTS-HD Master Audio 2.0 mono sound mix is quite typical of its era. Dialogue is mostly well recorded though some obvious ADR work is noticeable. Jerry Fiedling’s beautiful score and the sound effects including much gunfire come across sharply enough though obviously without the crack and thunder that modern sound mixes would offer similar scenes of firepower. No hiss, crackle, flutter, or pops mar the listening experience.

Audio Commentaries: three are provided. For this encore edition, a new commentary recorded in 2016 features producer Nick Redman along with Peckinpah expert Paul Seydor and Assistant to the Director Katy Haber who worked on eight Peckinpah productions including this one. It’s an engaging conversation even when all three speakers are talking over one another with lots of apt questions posed by Nick Redman and honest, answers offered up by Ms. Haber who was not only a professional colleague but also on intimate terms with the director. As for the other two carried-over commentaries, producers Gordon Dawson and Nick Redman converse amenably about the former’s experience on the film and his work on several other Peckinpah productions with Redman asking excellent questions and guiding the conversation proficiently. In the third track, film historians Paul Seydor, Garner Simmons, and David Weddle, all of whom have authored books on Peckinpah’s life and work, share the track with historian Nick Redman (though he does much less talking in the second commentary and lets the others have the floor).

Passion and Poetry: Sam’s Favorite Film (55:36, SD): family, friends, and associates participate in this interesting documentary directed by Mike Siegel about the making of this movie.

A Writer’s Journey (25:54, SD): Garner Simmons describes his experiences with the production (six weeks total time) as he was preparing a biographical book on the director.

Promoting Alfredo Garcia (5:59, SD): a montage of the movie’s posters and lobby cards from around the globe.

Six-Page Booklet: contains some color stills, poster art on the back cover, and film historian Julie Kirgo’s trenchant analysis of the movie.

A favorite of Sam Peckinpah fans though usually not for the general audience of moviegoers, Bring Me the Head of Alfredo Garcia comes back to high definition courtesy of Twilight Time’s encore edition of the movie. There are only 3,000 copies of this Blu-ray available. Those interested should go to www.twilighttimemmovies.com or www.screenarchives.com to see if product is still in stock. Information about the movie can also be found via Facebook at www.facebook.com/twilighttimemovies. 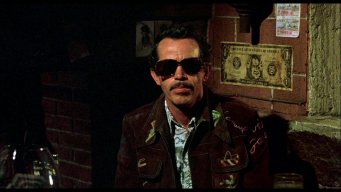 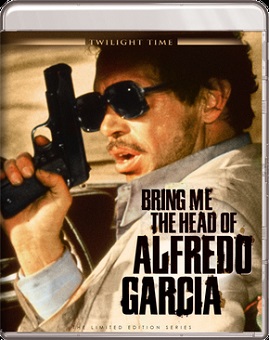