A new poll conducted by Morning Consult/The Hollywood Reporter, whose surveys we’ve covered before, suggests that there is “scant” support for diversifying James Bond.

Daniel Craig is set to play the MI6 spy once again in Bond 25, but many of you will have noticed that there has been much media coverage in recent weeks predicting that the franchise is destined for a shake-up. Some reports have even claimed that British actor Lashana Lynch has been cast as the next 007.

The survey has found that while a majority of Americans support a black Bond, 29% are against. However, when it comes to a female Bond, Americans are far less receptive with only 37% supporting the idea. When broken down into political allegiance, Republicans are divided on supporting (39%) or opposing (40%) a black James Bond. Half or more Republicans oppose other racial minority Bonds and a female or gay Bond. Democrats are more supportive of a non-white-male Bond than Republicans are, but divided on a gay Bond (41% support, 40% oppose).

Respondents were more likely to agree that the Bond series is a classic and nothing should change (51%) than they are to say it should change with the times, and feature a more diverse cast (34%). 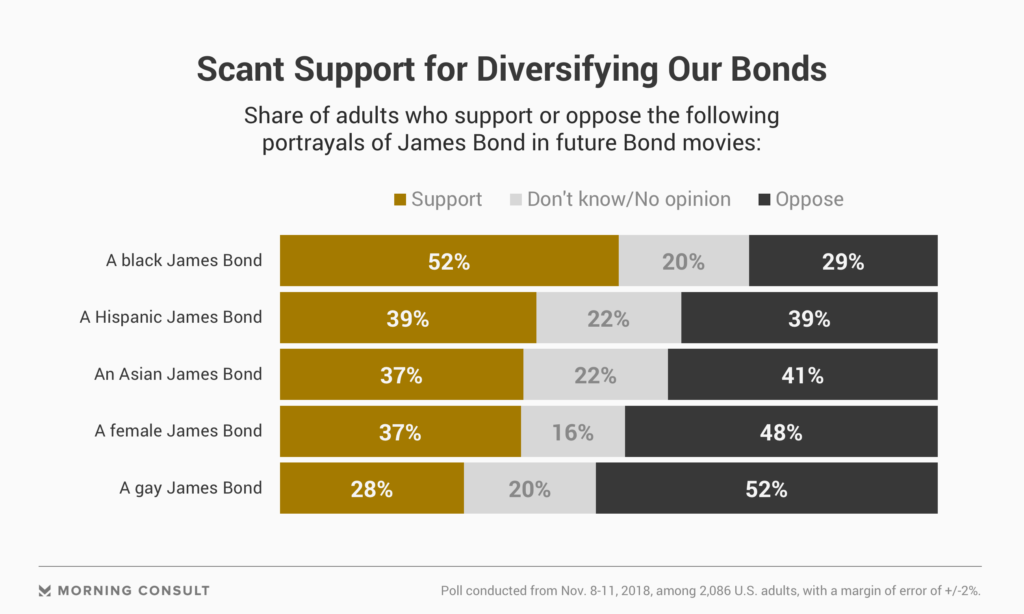 Meanwhile, following on from our story last week about recent US-based Netflix subscription cancellations, Morning Consult/The Hollywood Reporter has also found that three in 10 young viewers could cancel Netflix when The Office or Friends leaves the streaming service. With confirmation that Netflix will lose both shows next year, the recent survey found the impending departure of their most popular shows could have a notable impact on growth, with 30% of subscribers polled between the ages of 18 and 29 saying they would cancel.

Among the same audience, nearly half (49%) would cancel Netflix if The Office, Friends, Marvel movies and Disney content were all removed from the service, compared to 32% of all subscribers who said the same.