The Horseman have been tasked with another maguffin in Now You See Me 2, taking the three remaining men and a new female member (Lizzy Caplan) to Macau. Unfortunately, what unfolds is forgettably predictable.

Set one year after the events in the previous film (didn’t I just say the same thing with Teenage Mutant Ninja Turtles: Out of the Shadows?), J. Daniel Atlas (Jesse Eisenberg) is getting secret messages from The Eye while The Horsemen are in hiding as wanted fugitives. Their “leader” Dylan Rhodes (Mark Ruffalo) is also preparing them for a return to the spotlight, introducing them to Lula (Lizzy Caplan), while at the same time returning to his job as an agent at the FBI. Rhodes wants Atlas, Merritt McKinney (Woody Harrelson), Jack Wilder (Dave Franco), and Lula to expose Owen Case (Ben Lamb), the CEO of OCTA, an electronics company that is getting ready to launch a new, revolutionary smartphone that, unbeknownst to its users, retrieves personal information and sends it to the highest bidder. That event backfires, with Rhodes outed as a member of the Horsemen and the magicians finding themselves in a laundry hamper at a Chinese restaurant in Macau, where they are captured by Merritt’s twin brother Chase (also played by Harrelson). Chase turns them over to Walter Mabry (Daniel Radcliffe), Case’s former business partner and believed to be dead. In an attempt to track down the Horsemen, Rhodes somehow manages to free Thaddeus Bradley (Morgan Freeman) from jail. Mabry wants the Horsemen to steal the chip that controls OCTS’s new smartphones from a high-level secured facility (the sequence is well-staged and, supposedly, was completed with very little CGI work). Atlas tries to turn the chip over to The Eye, but Chase and Mabry manage to derail that plan, all leading to a showdown in London that is illogical and unbelievable.

And that is the heart of the problem with Now You See Me 2, as well-staged as the caper sequences are, they come off as predictable and, well, staged, serving the main plot and many other subplots that are illogical and forgettable. The main cast of protagonists have a chemistry that works, Radcliffe appears to be enjoying his role a bit too much, but the best thing about Now You See Me 2 is Lizzy Caplan, whose sarcasm and enthusiasm helps carry much of the film’s humor.

Shot digitally with the Arri Alexa XT Plus and Red Epic Dragon, Now You See Me 2 looks very good in UHD with HDR. Colors are more stable and vibrant than the 1080p Blu-ray, and a subtle increase in fine detail. There is some intentional grain present in the opening flashback prologue, resulting in a softer image that quickly resolves itself when we are transported into present day. Contrast is generally very good, although there are a few instances where it appeared the image was possibly too dark, with dark fabrics getting lost in the shadows.

Lionsgate has provided both the UHD and Blu-ray discs of Now You See Me 2 with a very solid Dolby Atmos track that includes a Dolby TrueHD 7.1 core. This is a very active track, even when played back in a 5.1 configuration with front heights added and Pro-Logic IIz engaged. Dialogue is clear and understandable throughout, directed mostly to the center channel. Surround effects and music take full advantage of all seven channels, providing an immersive experience for the audience. LFE is also used extensively, giving the score a nice deep end while also adding some extra oomph to explosions, crashes, engines, etc.

All of the special features can be found on the 1080p Blu-ray disc.

Audio Commentary by Director Jon M. Chu: The director talks about how many of the sequences were completed, working with the cast, casting choices for the new characters, etc.

Bringing Magic to Life (1080p; 16:09): A look at how the magic was performed in the film (most of it practical and in-camera, with very little CGI work).

It’s a shame that Now You See Me 2 is as forgettable as it is, the ride is amusing, but when it’s over, there’s not much that stays with you. Video and Audio are almost excellent, but the special features are rather bland. 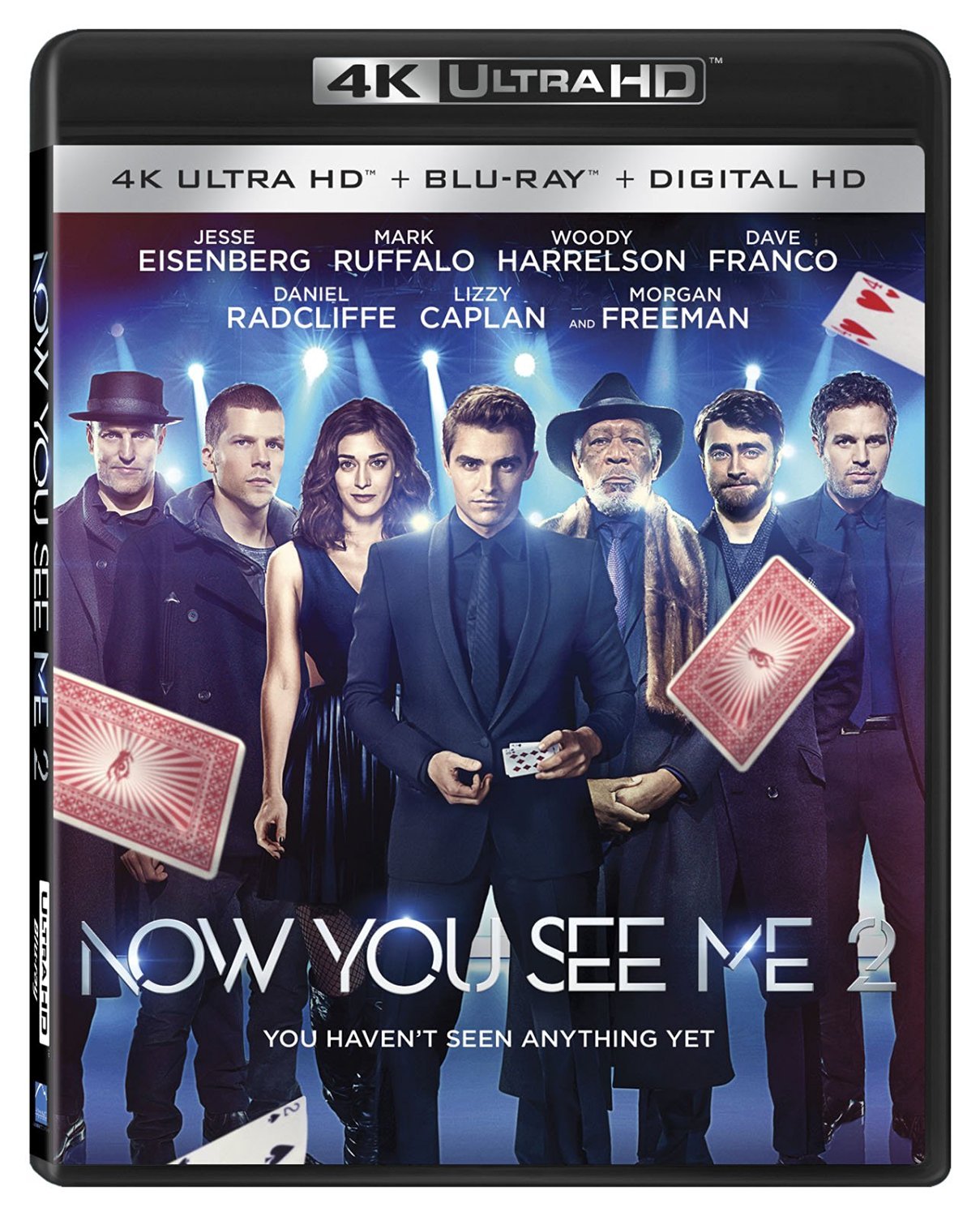