One of network TV's crown jewels comes to an end. 4 Stars

A grand and glorious network drama comes to its end with the seventh and final season of CBS’ The Good Wife.

The seventh season for CBS’ celebrated series The Good Wife was a bittersweet one for several reasons. Uppermost, of course, is that the seventh season was the final one, one last chance to watch some of television’s most fascinating and complex characters react to life and love in varied and unexpected ways. Because this was the last roundup, quite a few interesting avenues of plot and character exploration introduced during this last year were left somewhat unresolved and under-explored due to the limit of only twenty-two episodes in which to wrap up the stories for the principal characters. And, saying goodbye to the show meant saying farewell to one of the last vestiges of inventive, sophisticated drama available on network television. It may be a cliché, but The Good Wife will be sadly missed.

In the seventh season, the professional journey of attorney Alicia Florrick (Julianna Margulies) goes through three distinct stages of change. Fired from the firm where she was a name partner, Alicia must begin again on the bottom rung with her own practice operating out of her apartment and relegated to doing bar attorney work in bond court, true grunt work for struggling attorneys. Here she meets Lucca Quinn (Cush Jumbo) who mentors her through the fever pitch, cutthroat atmosphere of bond court where cases are expected to be pushed though in less than a minute, something Alicia struggles with during the four episodes she retains that job, greatly antagonizing the presiding judge there Judge Don Schakowsky (Christopher McDonald). With the rapport between Alicia and Lucca so strong, they’re soon working as partners out of Alicia’s apartment, the second stage of Alicia’s seventh season journey, hampered by a lack of high paying clients, leftover problems with Judge Schakowsky, and her estranged husband Peter Florrick (Chris Noth) making a run for President. Alicia’s spirits are heightened, however, by a new man in her life, investigator Jason Crouse (Jeffrey Dean Morgan).

When Alicia’s former partners Diane Lockhart (Christine Baranski) and Cary Agos (Matt Czuchry) offer her a junior partner position back at the firm, her and Lucca’s lack of success on their own compels them to climb aboard Lockhart, Agos & Lee for another try at making a go in a large firm, but a power play at the firm between the partners sweeps Alicia and Lucca into a maelstrom of secrets and lies undercutting their enjoyment of the perks that working for such a large firm can afford. With Peter’s Presidential bid unsuccessful and now finding himself indicted for previous criminal activity, even his governorship is in jeopardy as Alicia and Peter’s trusted Chief of Staff Eli Gold (Alan Cumming) work furiously to get to the bottom of the legal problems he’s facing. Also there’s a love interest for Eli (guest star Vanessa Williams) that lasts a few episodes and then is quickly forgotten in the frenzy of the latter half of the season.

Amid all of the personal crises involving Alicia and her family, there are also, as has always been the case with the program, a series of interesting legal matters which Alicia, Lucca, and the firm must deal with. From museum vandalism, student loan fraud, automated car mishaps, pro-choice versus pro-life, music copyrights, a secret governmental legal committee (episode #15, one of the most riveting of the season), and drive-by shootings, the courtroom is always just as interesting as the bedroom and the boardroom in this wonderful show. Those familiar with previous seasons will nod familiarly when the NSA rears its ugly head in several seventh season episodes, and returning favorites like Elsbeth Tascioni (Carrie Preston), Nancy Crozier (Mamie Gummer), and even Will Gardner (Josh Charles) make surprise appearances. As for the notable judges, this season features such familiar faces as Jane Curtin, Saul Rubinek, Dominic Chianese, Marsha Mason, Joe Grifasi, Jay O. Sanders, Denis O’Hare, Kurt Fuller, Jane Atkinson, and David Paymer presiding over these fascinating legal matters. And in their last go-round, the cast to a person is perfection. Years of grooming these characters have made them like family to regular viewers, and the addition of Cush Jumbo, Jeffrey Dean Morgan, Margo Martindale (as political strategist Ruth Eastman), Will Patton (as Peter’s new attorney Mike Tascioni, yes, Elsbeth’s ex-husband with his Chihuahua Tom), Matthew Morrison (as dastardly ASA Connor Fox),  and Nikki M. James (new associate Monica Timmons whose hiring and subsequent employment gets a bit of short shrift) are most welcome new members of the family.

Here are the twenty-two episodes contained on six DVDs in the seventh season set:

The program is presented on CBS in 1080i and at 1.78:1 for its network broadcasts, and these downconverted 480p transfers look just about as good as it’s possible for a series to look in standard definition. Colors can be warm and rich and deeply saturated, and contrast is always spot on. Flesh tones are usually quite natural. Sharpness is pleasing but merely a shadow of what we get on high definition broadcasts. There is a bit of aliasing and some moiré patterns that can be glimpsed on select episodes. Each episode has been divided into 6 chapters.

The Dolby Digital 5.1 audio track (the discs also offer a Dolby stereo surround 2.0 track) does not milk its busy urban streets and legal offices for a maximum of ambient sounds. True, music by David Buckley does offer a spacious surround presence in every episode, and dialogue has been expertly recorded and placed in the center channel. More could be done audio-wise to make the soundtrack as involving and immersive as the cases and personalities the series presents.

Deleted/Extended Scenes: forty-nine episodes are spread over the six discs, attached to the episodes from which they’ve been excised.

All Good Things: Farewell Alicia Florrick (25:20): creators Robert and Michelle King, producers Brooke Kennedy and David Zucker, and stars Julianna Margulies and Cush Jumbo discuss the decision to end the series with season seven, their favorite moments of the season, and things they remember most about producing the series.

Final Score: The Music of The Good Wife (9:38): composer David Buckley discusses his classical-style fugue underscore which has been a big part of the series for the past several seasons.

The Good Wife: It’s a Wrap! (3:28): behind the scenes looks at the last day of shooting and the on-set party held to celebrate the wrapping of the series.

Gag Reel (4:20): outtakes from all seven seasons, not just the final season. Also, a final bow for all of the guest stars over the years in a dizzying montage.

A grand and glorious network drama comes to its end with the seventh and final season of CBS’ The Good Wife. Though only standard definition discs have been issued of this landmark series, they look and sound about as good as they can for fans of the show. Recommended! 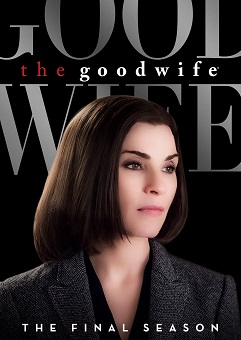