Forum List What's new Dark Style Change width
Log in Register
What's new Search
Menu
Log in
Register
Navigation
Install the app
More options
Dark Style
Close Menu
Posted on September 5, 2016 by Ken_McAlinden
You are using an out of date browser. It may not display this or other websites correctly.
You should upgrade or use an alternative browser.
Signature Shane Black blend of action, comedy, and dysfunctional partners 4 Stars

The Nice Guys features Russell Crowe and Ryan Gosling as an enforcer for hire and a private detective who cross paths when a client of the enforcer who is also the subject of an investigation by the detective goes missing.  Fans of Director Shane Black expecting his trademark mix of comedy, action, violence, and mis-matched protagonists will not be disappointed.

Having established himself as perhaps the premier action screenwriter throughout the late 80s and 90s, Shane Black assumed the director’s mantle in 2005 with Kiss Kiss Bang Bang, which proved to be an un-apologetically R-rated heady brew of all of the signature elements for which his screenplays were known.  This included a mis-matched pair of protagonists, a twisty complex plot keeping said characters way outside of their comfort zones, elaborate action sequences, and generous helpings of both high and low comedy.  The Nice Guys is cut largely from the same cloth, adding the novelty of a late 70s period Los Angeles setting and a fresh pair of questionably competent protagonists.

Ryan Gosling’s Holland March is a Private Detective, single father, and burgeoning alcoholic just barely holding himself together after the loss of his wife.  His is the most eccentrically comedic of the two lead characters.  My favorite sequence in the film involves Gosling performing a full-on Lou Costello reaction take when he stumbles across a corpse.  Going broad like this may turn off some viewers, but for me, it was the point of the film where I decided I was 100% on-board.  Russell Crowe’s Jackson Healy is the straight man, albeit with his own set of quirks including a propensity for violence that comes in handy when Healy and March frequently find themselves over-matched.

Like many of the vintage detective yarns to which the film plays homage, the plot is preposterously complex and largely beside the point.  Black’s real interest is in creating surprising turns to keep the audience guessing and observing how March and Healy will respond to the colorful supporting characters and extreme situations in which they find themselves.

The film is presented at its theatrical aspect ratio of 2.4:1 via  1080p AVC encoding.  The film’s 70s setting is put over by both a production design and filtered appearance that emphasize browns and yellows.  This results in a purposefully unnatural appearance rendered faithfully with no signs of weakness in the encoding.

The most compelling aspect of the lossless DTS-HD MA 5.1 encoding is the excellent fidelity benefiting both the extensive dialog and the mix of original and period seventies music used to score the film.  Surrounds are used sparingly to provide light ambiance for most of  the film, but occasionally roar to life during the dynamically mixed action sequences.

When the disc is first played, the viewer is greeted with the following series of skippable promos:

Proper special features consist of only two electronic press kit style featurettes.  They are above average for what they are, and provide some fun and occasionally informative glimpses behind the scenes of the film’s production, but they do not provide much depth

Always Bet on Black (5:27)  ostensibly focuses on the films Director and co-writer Shane Black, but so does the other included featurette.  On camera comments on Black and The Nice Guys in general are provided by Ryan Gosling, Margaret Qualley, Joel Silver, Matt Bomer, Shane Black. co-writer Anthony Bagarozzi, Kim Basinger, and Russell Crowe.

Worst. Detectives. Ever. Making The Nice Guys (6:16)  Is a general “behind the scenes” featurette with a bit more information from the film’s crew than the previous featurette.  It shows off some snappy editing, but is far from comprehensive due to its limited run time.  On-camera comments are provided by Silver, Black, Bagarozzi, Gosling, Crowe, Angourie Rice, Keith David, Beau Knapp (“Blue Face”), Matt Bomer (“John Boy”), Costume Designer Kym Barrett, and Stunt Coordinator Markos Rounthwaite.

This Blu-ray combo pack also includes a standard definition DVD of the film.  It presents the film in 16:9 enhanced standard definition video with Dolby Digital 5.1 audio in English, English Descriptive Audio, Spanish, or French and available subtitles in English SDH, French, or Spanish. When the disc is first played, the viewer is greeted with the following series of skippable promos:

The only proper special feature on the SD DVD is the previously described “Always Bet on Black” featurette.

Shane Black’s The Nice Guys does not break a lot of new ground, but will likely please fans of his previous work, the film’s stars, and the classic detective genre to which it largely pays homage.  It is presented on Blu-ray disc with a solid audio/video presentation and minimal extras consisting of two brief electronic press kit style featurettes.

Thanks! Very fun film when my wife and I saw it at the theater. This will be a purchase when the price comes down a bit.
You must log in or register to reply here. 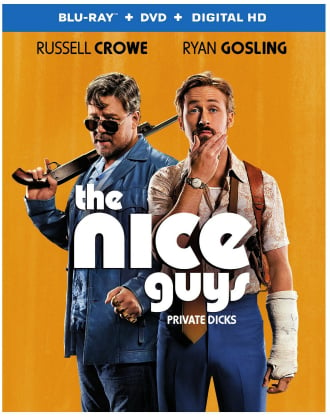