Forum List What's new Dark Style Change width
Log in Register
What's new Search
Menu
Log in
Register
Navigation
Install the app
More options
Dark Style
Close Menu
Posted on September 7, 2016 by Todd Erwin
You are using an out of date browser. It may not display this or other websites correctly.
You should upgrade or use an alternative browser.
Makes a great UHD Demo Disc 4 Stars

Shout Factory continues to release some noteworthy films created for IMAX screens in the UHD disc format, and MacGillivray Freeman’s Humpback Whales is no exception, and makes for another terrific demo disc for the new format.

At one time hunted to the brink of extinction, with the help of humans and nations banning whaling, these giant sea-faring mammals have made something of a comeback. Documentary film maker Greg MacGillivray captures the grace of these behemoths in his Humpback Whales, filmed in the 15-perf/65mm IMAX 3D format, particularly in one of the opening shots where the image has been flipped upside down, providing the illusion of flying above the water. Ewan MacGregor narrates the film, as we travel to Alaska, Hawaii, and the small island of Tonga where this species of whale migrate to and from. During the film’s brief 40 minute running time, we learn how man nearly hunted the humpbacks to extinction, how these animals communicate through their often mystical and beautiful songs, how they care for their young (after a 12-month pregnancy), how they feed, how oceanographers and other marine scientists are helping to educate the world in saving wales, how they are still in danger (even though most nations have banned hunting) through pollution and boats disrupting their migratory paths, and how everyone can pitch in and help save these creatures. MacGillivray is no stranger to the IMAX documentary, having directed the Oscar-nominated Dolphins and The Living Sea, and according to his biography, holds the record for exposing the most 70mm film stock and the first documentarian to pass the $1 billion box office mark. Humpback Whales is yet another achievement for the director, an entertaining and beautifully photographed documentary on the species that became the heroes in Star Trek IV: The Voyage Home.

Photographed for the most part in 15-perf/65mm IMAX, Humpback Whales arrives in a nice 4K UHD and 3D Blu-ray combo pack from Shout Factory. The UHD disc allows viewers the option to watch with or without HDR. Regardless of which version you choose, the disc is definitely demo-worthy material. Colors are vibrant and natural, with very noticeable gradations of blue during many of the underwater sequences. Detail is phenomenal, thanks to both the higher resolution of the source material and the 2160p resolution of UHD. The distinct textures of the whales’ skin, especially the ribbing and barnacles. Depth of field is also improved, particularly during shots filmed above water. Contrast is also excellent, with no noticeable crushed blacks or blooming whites.

The Blu-ray contains the film in both 2D and 3D, and , unfortunately, the 3D, in its implementation, was disappointing, but may have more to do with the subject matter and the distance of the cameras to their subject in order to capture them on film in their natural environments. For much of the film, there is a sense of depth where much of the action appears somewhat behind the front plane, but it is often minimal. However, there are a few brief shots where it appears that a flipper just barely pierces the screen, but nothing really jaw-dropping. Still, it is nice that Shout Factory made the effort to include a 3D version in this package.

The UHD and Blu-ray contain the same Dolby Atmos soundtrack, which contains a Dolby TrueHD 7.1 core. This is a very immersive track, even when played back in a 5.1 configuration with additional front height speakers and Pro-Logic IIz enabled. The score by Steve Wood with Calum Graham (and featuring Best Day of My Life performed by American Authors) is spread evenly across all channels. There are a few panning effects during the opening title sequence, and LFE gets a chance to perform when the whales breach and crash down on the water. Narration is directed almost exclusively to the center channel, and never gets lost in the mix.

The Special Features are available on both discs.

Making of Humpback Whales (1080p; 17:07): A short documentary on the making of the documentary, it offers some insight on how many of the shots were created, as well as a very brief glimpse at scoring the film and recording the narration.

A fascinating documentary on Humpback Whales that can also serve as a demo disc to show off the capabilities of your new UHD display and UHD Blu-ray player, and also includes the film in 1080p 3D.

Thanks for the review, Todd. I have the Bluray version, which I thought looked and sounded excellent as well. I was disappointed that the Digital Copy was not UV, though. I find the old DC format useless.

My wife and I both enjoyed the film. We've been whale watching about a dozen times in Hawaii, Alaska, Maine and Boston, so the subject matter is of great interest to us. The film really highlighted some of the behaviors we have witnessed live over the years -- breaching, bubble net feeding, singing, etc.
Last edited: Sep 9, 2016

I'll have to check my copy of American Cinematographer, but I believe this was actually shot in 2D, and then post-converted to 3D. That may explain why the 3D isn't as impressive as it is for other IMAX titles. I believe AC also said it was primarily shot with a new kind of digital camera rig that allowed the camera to be constantly rolling for hours without actually recording any footage to a hard drive, so that they could keep the cameras pointed in the directions of where they thought the whales would be without having to worry about getting up to speed in time, and then only save footage that actually had whales to the hard drive after it happened. Sounded like pretty cool stuff.

The website for the film indicates it was shot mostly in 15-perf/65mm IMAX. No mention is it was native 3D or not.
You must log in or register to reply here. 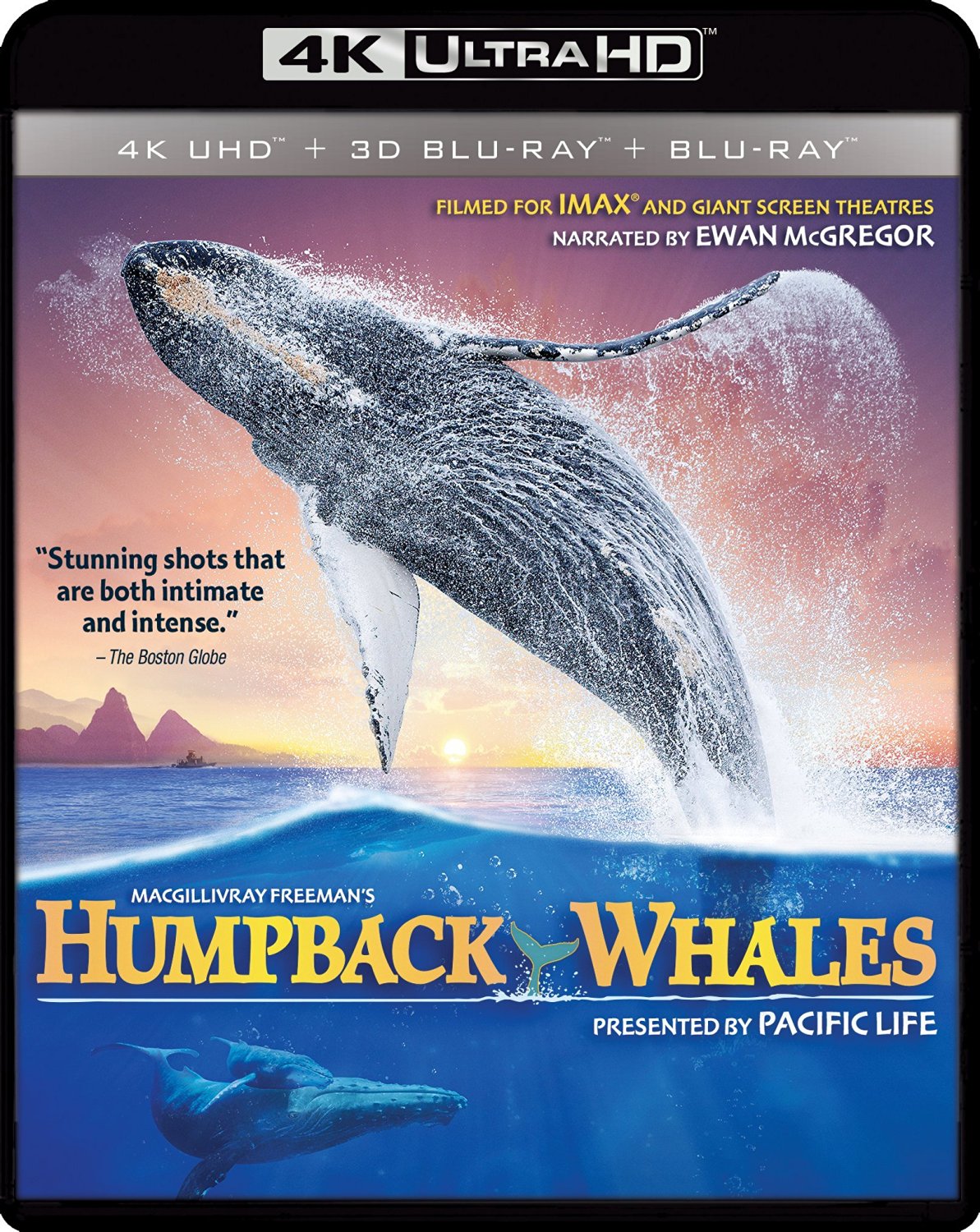