Posted on September 5, 2016 by Matt Hough
Accurate and engrossing reenactment of one of the last century's most notorious trials. 3.5 Stars

Covering probably the most sensational murder trial in the last years of the 20th century, The People V. O.J. Simpson marks the first installment in Ryan Murphy’s American Crime Story series. Over ten episodes, the infamous court battle featuring a once-beloved sports and entertainment star fighting for his life on trial for two murders he claims not to have committed captured the public’s attention for more than a year. Now removed more than twenty years since these events occurred, The People V. O.J. Simpson offers a fairly riveting look at all of the turmoil going on both before and behind the scenes of this notorious court proceeding. A splendid cast of well-known actors takes on these famous roles like second skin and in most cases breathe new life into (for some of us, anyway) a still-raw period in American jurisprudence.

Arrested for the murders of his ex-wife Nicole and her boyfriend Ron, former football megastar O.J. Simpson (Cuba Gooding Jr.) protests his innocence. His lawyer Robert Shapiro (John Travolta), known for taking plea deals rather than going to trial, knows he’s going to need more hands on deck to assist with this important murder trial. Brought in immediately is O. J.’s best friend Robert Kardashian (David Schwimmer), a former attorney who’s encouraged to renew his license to practice to assist in the defense. Shapiro also brings in renowned litigator F. Lee Bailey (Nathan Lane) who had handled high profile clients in decades past and gotten them off. But the key to the defense’s strategy is hotshot firecracker attorney Johnnie Cochran (Courtney B. Vance) who brings his anything goes, street fighting tactics to pull every trick in the book to distract the jury from examining the mounds of physical evidence rationally and instead focusing emotionally on rampant racism in the LAPD exemplified by the lead officer in the original discovery Mark Fuhrman (Steven Pasquale). Throughout, the prosecution led by Marcia Clark (Sarah Paulson) and co-counsel Christopher Darden (Sterling K. Brown) must deal with intrusions into their personal lives, obvious baiting in the court to make them lose focus, and the continually successful defense tricks to deflect any points they might make with distracting obfuscations that thwart their progress.

Adapted from the best-selling book The Run of His Life: The People v. O.J. Simpson by Jeffrey Toobin, Scott Alexander and Larry Karaszewski in their scripts and in their supervision of teleplays not written directly by them present not only the facts that aired almost non-stop on network television and Court TV of the era but also much of the behind-the-scenes turmoil going on with both the prosecution and defense sides of the case (contrary to what many believed, there was much dissention on the defense side about Johnnie Cochran’s sometimes outrageous strategies). The ten episodes marvelously capture the circus-like atmosphere surrounding the long months of the trial, and the many shenanigans pulled off in court to confound and frustrate wishy-washy Judge Lance Ito (Kenneth Choi) who, like many of the attorneys present, is too self-conscious about the cameras in court recording every change of expression and too cognizant about the press coverage (including sensationalistic blurbs in the tabloids that also weigh heavily on personal behaviors and decisions).

The two lead attorneys and the defendant are the undoubted stars of the series, three people whose oversized egos and skeletons in their closets continually come into play during the running of the series. Sarah Paulson’s Marcia Clark captures her overconfidence early-on and her never-doubting belief that the physical evidence is too overwhelming to ignore, a certainty that she eventually learns is a pipe dream. Courtney B. Vance’s Johnnie Cochran is the cock-of-the-walk throughout the ten episodes, supremely in command at almost every turn (a couple of setbacks do allow the actor to portray something other than supreme confidence) and a very showy, charismatic performance. Cuba Gooding, Jr. as O.J. Simpson isn’t really a credible physical match for the size or voice of the very famous sports and entertainment personality, but one ceases to be bothered by that as the show progresses as he manages to play both potential sides of the man: possibly innocent, possibly guilty emerging as a complete enigma by the end of the show as he stares at the gigantic statue of himself in all his football glory in his backyard wondering where his formerly celebrated life went wrong.

The supporting players are also very strong. Sterling K. Brown represents wonderfully well Christopher Darden who quite obviously wears his heart on his sleeve and is too easily led astray by his emotions. David Schwimmer scores a career high as Robert Kardashian even if the writers and director insert a sappy scene early on where he warns his young kids about the emptiness of fame without merit, a family that today actively celebrates the riches that fame for fame’s sake have brought them. Nathan Lane is exceptionally good as F. Lee Bailey while Steven Pasquale gives us a Mark Fuhrman who as the series runs literally can make our skins crawl. John Travolta, on the other hand, gives a terrible performance in the opening hour: mannered, stiff, and creepily affected though he seems to adjust to his role and perform more naturally in later episodes. Other famous faces like Bruce Greenwood, Robert Morse, Chris Bauer, Cheryl Ladd, Christian Clemenson, Rob Morrow, and Billy Magnussen make their smaller roles count for a lot.

Here are the ten episodes contained on three Blu-ray discs in this set:

1 – From the Ashes of Tragedy

The episodes are framed in their widescreen television aspect ratio of 1.78:1 and are presented in 1080p using the AVC codec. While sharpness is generally excellent, there are on quite a few occasions scenes where softness pervades for no good reason. Color is solid and secure throughout. Black levels are excellent in these episodes, and contrast is generally consistent with a few glaring exceptions. Each episode has been divided into 7 chapters.

The DTS-HD Master Audio 5.1 sound mix places the dialogue-heavy track in the center channel. The music by Mac Quayle gets a very nice spread through the front and rear soundstage while the split effects only occasionally venture into the rear channels during moments like demonstrations in the streets or the infamous freeway chase that is covered in episode two.

Facts of the Case: An Interactive Timeline (6:08:12, HD): a timeline that traces the pre-trial, prosecution’s case, defense’s case, rebuttal arguments, and verdict can pull up clips from the show to explain each salient point on the journey toward the verdict.

Packaging: the slipcover offers a fold-out shorthanded timeline of events in the real story.

The People V. O.J. Simpson offers a sterling dramatization of one of the most notorious trials in the second half of the 20th century. With outstanding performances and superb production design that brings back that era with soul-shaking accuracy, this limited series, nominated for 22 Emmy Awards, is undoubtedly one of the season’s most notable achievements. 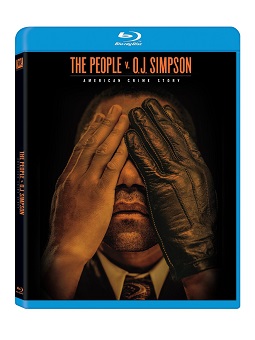