Forum List What's new Dark Style Change width
Log in Register
What's new Search
Menu
Log in
Register
Navigation
Install the app
More options
Dark Style
Close Menu
Posted on August 18, 2017 by Matt Hough
You are using an out of date browser. It may not display this or other websites correctly.
You should upgrade or use an alternative browser.
A surprisingly revitalized show in its eighth season. 4 Stars

Unquestionably the most creative and enjoyable season of NCIS: Los Angeles in many years, season eight made forward movements for all of its many characters and featured interesting and surprisingly well-plotted surprises for viewers that made keeping up with the season pure pleasure.

The best season in quite a long while took an enormous toll both narratively and personally on the cast and crew of NCIS: Los Angeles in its eighth season. With the actual death of one of the cast and several characters going through tumultuous journeys during the course of the season, the show this past year in a new Sunday time slot recharged and revitalized itself offering quite a few unexpected surprises along the way, resisting (for the most part) some of the tired tropes it had fallen back on in previous seasons, and moving all of the characters into new areas which will likely be explored more deeply in the seasons to come.

Two members of the cast contributed greatly to the different mood and tone of this eighth season. Miguel Ferrer, dying of throat cancer, worked for the first half of the season in a considerably weakened state portraying NCIS assistant director Oren Granger, the character himself dying from Agent Orange. The writers kept him involved in an arc which has occupied parts of the last three seasons of the show, the hunt for a mole or moles within the agency (after a three-year build-up, the revelations were quite surprising but a bit outrageous) trying to take down the entire NCIS team. Additionally, the real-life pregnancy of actress Daniela Ruah necessitated a lengthy storyline of injury, coma, recovery, and rehabilitation for her character Kensi Blye, storylines which allowed minimal participation for her character in many of the early season episodes but which craftily planted some plot points and characters who would make for major payoffs later in the season.

With Kensi out of commission for half of the season, this afforded opportunities for Renée Felice Smith’s Nell Jones and former agent Anna Kolcheck (Bar Paly) to work with various other agents on the team in the field. Nell in particular proved herself more than worthy to be a full-time agent handling brutes three times her diminutive size with ease. Anna, in addition to working the occasional case, also consummates a long-teasing relationship with previously loner agent G. Callen (Chris O’Donnell), his character not only tentatively trying for love once again but also encountering once more the father (Daniel J. Travanti) he had only recently discovered he had and additionally learning of the existence of a half-sister and niece totally alien to him. G. also experiences a deep shock when the identity of his previous lost love Joelle Taylor (Elizabeth Bogush) finally comes into the open.

As for the other members of the team, operations manager Hetty Lange (Linda Hunt) is up to her old tricks pulling off a series of subterfuges in order to save the NCIS: Los Angeles squad once Assistant Secretary of Defense Corbin Duggan (Jackson Hurst) moves in to take over operations completely. Operations tech analyst Eric Beale (Barrett Foa) does more field work resulting in some of the season’s most amusing episodes and inches closer in his infatuation with Nell Jones in one of their missions where they go undercover to a couples retreat. But Agent Sam Hanna undergoes the most life-changing experiences during the season when familiar enemies from his past including Ahmed Han Asakeem (Sammy Sheik) and especially Tahir Kahlid (Anslem Richardson) emerge in separate incidents to make life particularly unpleasant for the former Navy SEAL. In fact, the kidnapping of Sam’s long-time wife/former agent Michelle (Aunjanue Ellis) occupies the season’s final two episodes, an explosive two-parter that finds Sam frantic to locate his wife and going rogue in order to track down everyone responsible for her kidnapping.

Being a CBS procedural, of course, means that most of the episodes, despite carrying these long-running story arcs in the background, involve crime cases that can be discovered, investigated, and tied up within the space of the episode. Some of the plots revolve around a dirty bomb in play, a marine working against human trafficking, the poisoning of two Homeland Security agents, the manufacturing of weapons in an unassuming neighborhood home, an ex-Mossad agent under fire, the search for a double eagle gold coin worth millions, the stealing of plans for a stealth ship, and the search and recovery of $40 million worth of gold bars from the Vietnam era (which allows for the delightfully flinty guest stars James Remar, Carl Lumbly, and John M. Jackson reprising his J.A.G. role of A.J. Chegwidden, a character who seems like an obvious replacement for Ferrer’s Granger in the coming season).

Here are the twenty-four episodes contained on six discs in this season eight package:

1/2 – High Value Target/Belly of the Beast

6 – Home Is Where the Heart Is

The program is presented in its broadcast aspect ratio of 1.78:1 and is offered in anamorphic widescreen. Looking extremely sharp (with possibly some minor edge enhancement) and very colorful to reflect the West Coast lifestyle, these 480p transfers are about as good as standard definition transfers can look. Color is exceptionally rich with appealing skin tones, and contrast has been superbly applied for consistency across the episodes. Black levels are very good as well. There are some problems with minor aliasing and moiré patterns, but this is expected in most standard definition transfers. Each episode has been divided into 7 chapters.

The Dolby Digital 5.1 sound mix accurately reflects the network broadcasts though the volume levels seem to be increased a bit from their network counterparts. Dialogue is always easy to understand and has been placed in the center channel. Music gets an immersive placement in the fronts and rears, and atmospheric effects of zooming cars through the soundstage and rapid-fire rounds going off make use of the available channels for one of the most exacting of the network soundtracks. The frequent explosions give the subwoofer a good workout in many episodes as well. The discs also include a Dolby Digital 2.0 stereo track for each episode.

Audio Commentary: Barrett Foa and Renée Felice Smith provide commentary for the episode “Getaway” in which their characters go undercover to a couples retreat. The two longtime friends josh and joke their way through the episode (including a singalong for the show’s theme song) not offering much insight into its production but providing some personal insights into various cast and crew members.

Deleted Scenes: eleven scenes are scattered throughout the six discs in the set, attached to the episodes from which they were excised.

Dips and Salsa (10:19): a behind-the-scenes look on the production of the “From Havana with Love” episode which allows Daniela Ruah to show off her dancing skills with mambo and salsa. Commenting are episode director Dennis Smith, producer Scott Gemmill, choreographer Louie Novoa, and actors Daniela Ruah, Eric Christian Olsen, and guest star George Ahram.

Deep Impact: Season 8 of NCIS: New Orleans (29:08): an overview of the tumultuous season for the show which almost everyone agrees was one of its best but also one of its hardest. Commenting are all of the stars of the series (apart from Linda Hunt) taking about their character arcs this year along with producers Scott Gemmill and Frank Military.

The Nellverine (5:53): actress Renée Felice Smith speaks candidly about the challenges for her character during the season and how prepared she was to handle them. Also praising her efforts are producer Scott Gemmill and castmates Daniela Ruah, Barrett Foa, LL Cool J, Eric Christian Olsen, and Chris O’Donnell.

Remembering Miguel (9:37): the cast (apart from Linda Hunt) and producer Scott Gemmill share memories both on set and off of working with the late actor Miguel Ferrer.

Unquestionably the most creative and enjoyable season of NCIS: Los Angeles in many years, season eight made forward movements for all of its many characters and featured interesting and surprisingly well-plotted surprises for viewers that made keeping up with the season pure pleasure. While a high definition release would better represent what the network is broadcasting, a good upconverting player can do wonders with these excellent standard definition transfers. Recommended! 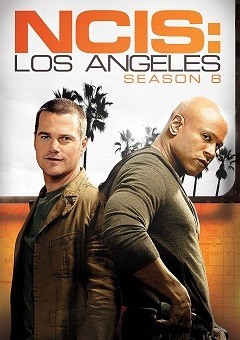