Forum List What's new Dark Style Change width
Log in Register
What's new Search
Menu
Log in
Register
Navigation
Install the app
More options
Dark Style
Close Menu
Posted on August 17, 2017 by Matt Hough
You are using an out of date browser. It may not display this or other websites correctly.
You should upgrade or use an alternative browser.
Funny Abbott and Costello romp 3.5 Stars

Though its title suggests possibly a western motif, Charles Barton’s The Noose Hangs High is instead another Abbott and Costello comedy lark this time set in the world of gamblers and bookies.

Though its title suggests possibly a western motif, Charles Barton’s The Noose Hangs High is instead another Abbott and Costello comedy lark this time set in the world of gamblers and bookies. As their first independent production away from their long-term Universal contract, The Noose Hangs High may not have the gloss and slickness of a big studio production, but the boys are in fine form enjoying several set pieces that exploit very well their unique brand of co-dependent comedy.

Ted Higgins (Bud Abbott) and Tommy Hinchcliffe (Lou Costello) are window washers who get mistaken for messenger boys and are tasked with picking up $50,000 that tough bookie Nick Craig (Joseph Calleia) needs to cover a bet placed and won by big stakes gambler J. C. McBride (Leon Errol). When Ted and Tommy learn that the mob boss (Ben Welden) is going to take the money from them and bump them off, Tommy decides to mail it to Nick to prevent being caught with the money on his person. But bumbling Tommy mails the money mistakenly to Mrs. Van Buren (Isabel Randolph) whose secretary Carol Blair (Cathy Downs) then takes the money and spends most of it. Nick gives the boys thirty-six hours to replace the missing money putting Ted, Tommy, and Carol, who feels completely responsible for spending the money, in a desperate situation to replace the money fast.

The plot spread out in the John Grant-Howard Harris screenplay is merely a hanger on which to spread several notable Abbott and Costello routines that have very little to do with the story they’re telling. The movie spends the first ten minutes of its seventy-seven minute running time in a series of extended gags featuring Tommy with a toothache (including some very shaky matte work on a window ledge). There is hilarity in the repetitiveness of a sequence where Ted tries to make up his mind about staying or leaving with poor Tommy completely dressing and undressing repeatedly, and Tommy trying to drive a car with a mind of its own earns some excellent chuckles as well. As for the team, there is one extended bit at a dinner table where Ted queries Tommy on a variety of topics that could have been lifted straight from one of their radio routines, but director Charles Barton makes good use of Leon Errol by letting him play straight man to Lou in a couple of sequences (a pool game that’s frequently uproarious and later some shtick swapped between the men as each becomes distracted and walks into a wall). There is less romance than usual even with the comely Cathy Downs as leading lady (Lou enjoys a final clinch that comes out of nowhere).

Abbott and Costello were riding high after the box-office sensation of their date with Frankenstein, and The Noose Hangs High contributed to the boys reentering the 1948 box-office top ten in the number three position (they had been missing from the list since 1944). As always their timing is impeccable even with Lou getting the lion’s share of screen attention in this outing. Joseph Calleia makes a great threatening villain, and Mike Mazurki abets him as his muscle bound, pea-brained henchman. Leon Errol makes the most of his comedy chances, and Isabel Randolph is an effectively arch, spoiled Mrs. Van Buren. Cathy Downs is a decent leading lady without much screen time. Look fast to see Fritz Feld, Ellen Corby, and Ben Welden in small roles.

The film’s 1.37:1 original theatrical aspect ratio is faithfully rendered in this 1080p transfer using the AVC codec. The image is mostly gorgeous with sharp, well defined images and very good grayscale even if black levels are possibly a bit less than reference quality. But there has been some work done on this master because it’s very clean and free from dust and digital artifacts that one might expect from an independent production of the era. The movie has been divided into 21 chapters.

The DTS-HD Master Audio 2.0 mono sound mix gets the job done with its limited fidelity. Dialogue (important for all of the verbal jokes to land) has been excellently recorded and has been combined with Walter Schumann’s background score and the ambient effects for a generally pleasing mono soundtrack typical of its era. There are no problems with hiss, crackle, pops, or flutter.

Photo Gallery (HD): an excellent array of forty-two lobby cards, posters, and stills which must be advanced manually. (These were courtesy of Home Theater Forum’s own Bob Furmanek!)

The Noose Hangs High is a wonderfully entertaining Abbott and Costello romp. While not nearly as familiar as their Universal titles and with pacing that’s perhaps a little less frantic than most of their film work, there are plenty of vintage Abbott and Costello moments that make it a must for fans of the team.

Hi Matt
Do you have the DVD to compare picture quality? Just wondering how big the improvement is.

You know, most of us have all of A&B movies in SD, so, what they are offering...do we double dip?

Is the SD, regulated to the new BD players...they shoot them to Faux 4K...

Why don't they redo AFRICA SCREAMS/JACK AND THE BEANSTALK/MEETS CAPT. KIDD?

Those are the films we want in 4k...RIGHT?

The DVD was taken from a 1990's standard def transfer.

This is a 2017 2K master from original 35mm nitrate elements.

The improvement is substantial!

Thank you. Bob. I didn't have the DVD in order to make a comparison, so I take your word as official! The Blu-ray really has impressive image quality throughout.
You must log in or register to reply here. 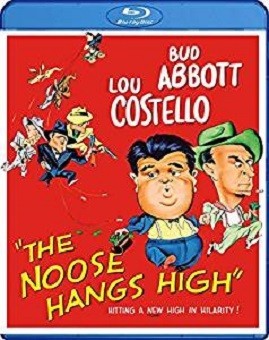