Shout! Factory’s re-issue of Rhino’s long out of print second volume of Mystery Science Theater 3000 episodes is short on bonus features, but brings back two classic episodes and the first compilation of shorts from the series.

Mystery Science Theater 3000 (MST3K) was the brainchild of Joel Hodgson, a former prop comic and frequent guest on Saturday Night Live and Late Night With David Letterman. Basically an extension of the popular hosted movie format made famous by Vampira and Elvira, the original premise was that Joel (and later Mike Nelson), along with his robot companions Crow and Tom Servo, were sent into space, orbiting the planet and forced to watch bad movies sent to them by Dr. Clayton Forrester (Trace Beaulieu). The show first aired on local Minneapolis-St. Paul UHF station KTMA in a very crude form in 1988, but was picked up by the Comedy Channel (now Comedy Central) as one of its first series a year later. The series survived for seven seasons, then moved to Sci-Fi for three additional seasons, finally falling out of first-run orbit in 1999.

As with Volume One released last Fall, Volume Two is a re-issue of the now out of print Rhino set, with some minor upgrades. Experiment 301, Cave Dwellers, and Experiment 303, Pod People, are considered classics, and are near-perfect in their execution, with rapid-fire riffing and host segments that succeed more than fail. Cave Dwellers (aka The Blade Master, a sequel to Ator: The Fighting Eagle) stars Miles O’Keeffe (to answer the question “How much Keeffe is in this movie?“) as the muscular Ator (introduced in a flashback spanning two segments, to which Crow responds “Even Tolkien couldn’t follow this plot“) who must save his mentor, Akronas (Charles Borromel) before the evil Zor (David Brandon, aka David Cain Haughton) finds Akronas’ latest invention, a shiny device that “is everything and nothing.” Ator is joined on this adventure by his trusty Asian sidekick Thong (Chen Wong) and Akronas’ daughter, Mila (Lisa Foster).

Pod People (aka Extra Terrestrial Visitors) is a badly dubbed mashup of Alien and E.T.: The Extra-Terrestrial, jumping from a small cabin in the woods where a young boy saves a large egg from a band of poachers which then hatches and out comes Trumpy, a darker, less-articulate and mute version of Alf, the poachers eluding the local forest rangers, and a rock band stranded in the woods on a weekend outing. But a second egg has hatched, with an evil version of Trumpy wandering the forest and killing anyone who gets in his way. Pod People never quite decodes if it wants to be a horror film, a children’s fantasy, or something else entirely. This opens itself to easy riffing by Joel, Crow, and Tom Servo, which include lines such as “Trumpy, you can do stupid things,” “Welcome to Laserium,” “Come on, breakfast is getting cold and she isn’t any warmer,” and “Say, what is it about the Gates of Hell that makes people want to wander into them?”

Experiment 622, Angel’s Revenge (aka Angel’s Brigade), is a knockoff of Charlie’s Angels, directed by schlockmeister Greydon Clark, about a group of scantily clad ladies who band together to take down a drug lord who is providing narcotics to teenagers. It’s a would-be comedy, with phoned-in performances by Jim Backus, Alan Hale, Jr., Pat Buttram, Arthur Godfrey, Peter Lawford, and Jack Palance. Oh, and it was photographed by a young Dean Cundey (Halloween, Back to the Future, Jurassic Park). The problem with the movie is that it’s a comedy that isn’t very funny, making it difficult for Mike, Crow, and Tom Servo to come up with memorable zingers. Most of the host segments fall flat, as well, relying more on pop culture references to the late 1970s and early 1980s that trying to come up with something original and funny. It’s not a bad episode, it just feels that way in the company of Cave Dwellers, Pod People, and MST3K Shorts, Volume 1.

Short subjects were originally nothing more than filler during the first two seasons (usually one or two episodes of a serial, sometimes a segment of General Hospital), but when the series turned its eye to educational and propaganda shorts, it became a game changer, often hitting a double, triple, and quite often a home run (and eclipsing the movie featured on the episode). Rhino began putting together these compilations when it looked like they were never going to be able to obtain and/or afford the proper clearances for the movie that came after these beloved shorts, many of which were in the public domain. Shorts, Volume 1 was created with the assistance of Best Brains, taping new introductions to these shorts by none other than Tom Servo. Included on this first volume are The Home Economics Story, Junior Rodeo Daredevils, Body Care and Grooming, Cheating, A Date With Your Family (which Crow subtitles The Woody Allen Story), Why Study Industrial Arts, and Chicken of Tomorrow. The riffing on each and every short included is often hilarious, although this reviewer has seen many of these shorts in their original form, and they have not aged well, making one laugh regardless.

The only fair thing to do is to judge the host segments, and the quality improves as you get later into the series. For the most part, the discs are excellent, with good detail and well-defined colors. Throughout all four discs, however, there are some brief minor anomalies inherent in the broadcast masters, such as dropouts, but these are few and far between.

MST Hour Wraps: The Rhino version of this set was barebones, with no special features. Shout! Factory is providing the MST Hour Wraps for Cave Dwellers and Pod People. Mystery Science Theater Hour was a short-lived hour-long version of the series for syndication (splitting each original episode in half), with Mike Nelson, in his Jack Perkins character, bracketing each episode with often bizarre anecdotes about the movie.

Mystery Science Theater 3000: Volume One is aimed more at the fan who may have come late to the game, having missed out on the original Rhino set when it was still in print, and not wanting to shell out well-over $100 for a used copy. Previous owners may want to check their original sets to see if the discs are still in good condition (my copies of Pod People and Cave Dwellers suffer from pinholes) and/or how badly they want the MST Hour Wraps as special features before deciding to purchase.

Thanks, Todd, for the great review with the "Is this worth a double dip?" questions answered. That is a HUGH help in my decision process for these along with the more compact case. 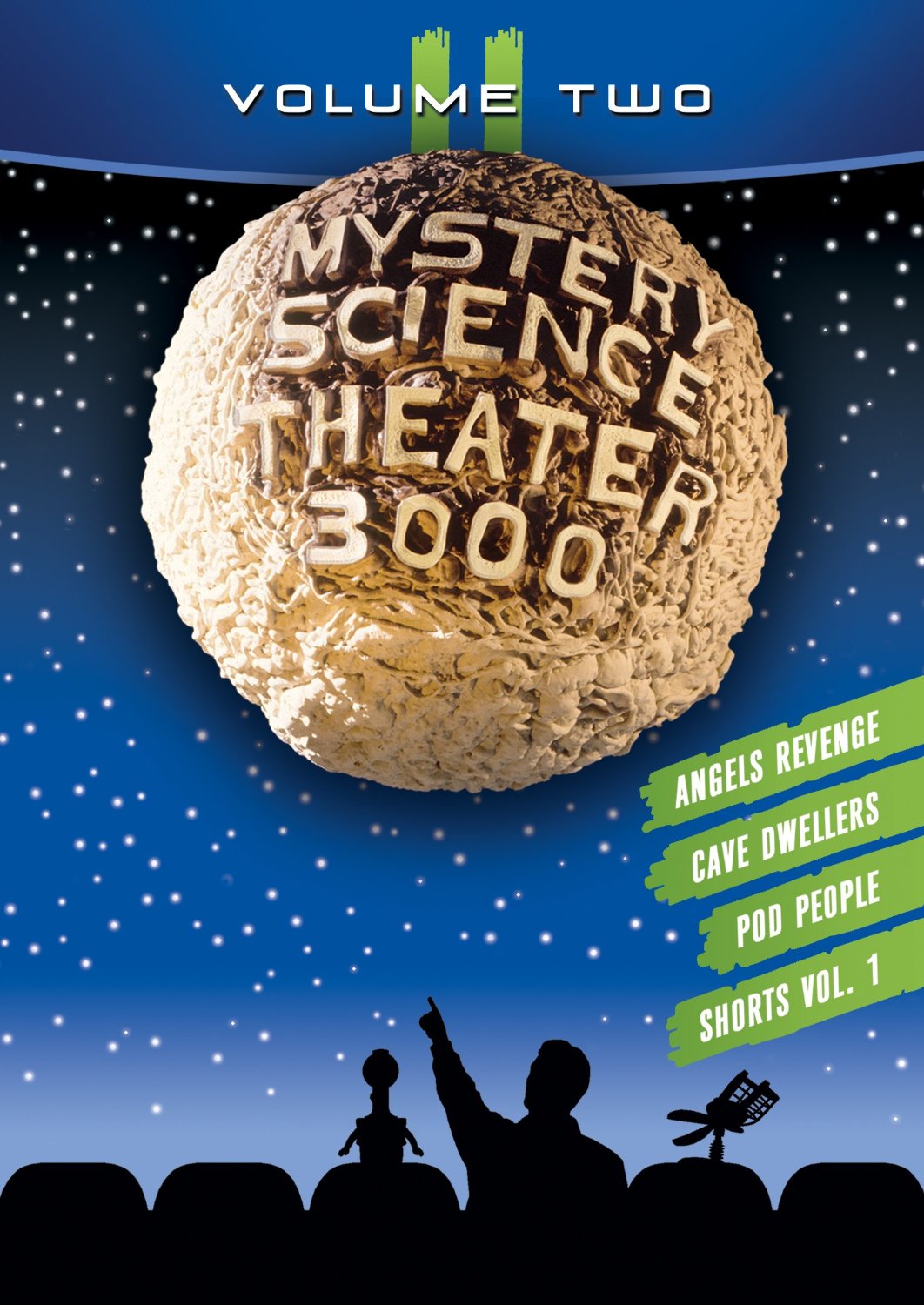