Henry Levin’s Holiday for Lovers takes a handful of talented, well-known actors and wastes them in a pointless domestic comedy travelogue, its narrative through line and eventual outcome as predictable as the rising and setting sun.

Henry Levin’s Holiday for Lovers takes a handful of talented, well-known actors and wastes them in a pointless domestic comedy travelogue, its narrative through line and eventual outcome as predictable as the rising and setting sun. Beautifully filmed in Cinemascope with some picturesque views of various portions of South America, the movie simply isn’t funny enough, and some of the characters are downright unlikable.

Boston psychologist Robert Dean (Clifton Webb) has always prided himself on his open-mindedness and rational behavior under pressure, so when oldest daughter Meg (Jill St. John) on a four-week tour of South America sends word that she’s remaining in Sao Paulo for a year to take advantage of an art scholarship being offered by noted professor Eduardo Barroso (Paul Henreid), Dean packs up wife Mary (Jane Wyman) and younger daughter Betsy (Carol Lynley) for an extended holiday in Brazil and other South American attractions so he can investigate what’s really going on down there. Meg wasn’t lying; she does have a scholarship, but she hasn’t been completely forthcoming, admitting once they’re there that she’s in love with Barroso’s adopted son Carlos (Nico Minardos) and planning to be married almost immediately. While there, eighteen-year old Betsy also falls in love with Air Force sergeant Paul Gattling (Gary Crosby), so Robert and Mary have two daughters with stars in their eyes ready to take that next crucial step toward adulthood.

Ronald Alexander’s Broadway play has been adapted for the screen by Tony-winning playwright Luther Davis, but the narrative meanders considerably and characterizations seem wildly inconsistent especially with the younger characters in the story who often seem far older than their years one minute and completely juvenile the next. The story drags in spots while Dean carts his brood around South America to give them time to think about their actions and him time to scheme next how to avoid the inevitable. The love stories for the two girls are typical Hollywood poppycock: true love at first sight with immediate marriage the goal (the Production Code still in force in the era demanded that the couples be married before they could go to bed together) while the film is padded unendurably by lengthy nightclub jaunts that feature Nestor Amaral and his Orchestra playing a Fox standard “Chattanooga Choo-Choo” with a samba beat and three flamenco dance numbers by Jose Greco and his troupe. But the major cardinal sins of this domestic comedy travelogue are that (1) it isn’t funny and (2) the main actors never leave the Fox soundstages and backlot. There is a lot of gorgeous second unit photography of Sao Paolo, Rio, and a Lima, Peru bullfight, but our stars watch it all on rear process screens safely within the confines of the studio, the rear projection work sometimes noticeably artificial and off-putting, Director Henry Levin who had guided Clifton Webb through many of his comedies uses the Cinemascope frame with alacrity staging shots to take advantage of its width and breadth, but pacing lags occasionally, and the film seems longer and more extended than its trifling plot really deserves.

Clifton Webb maintains his stiff-necked resolve through most of the film, confident that father knows best, but he’s saddled with an embarrassing drunk bit near film’s end that’s intended to be out-of-character funny but results in the nadir of his screen career. Perky Jane Wyman is completely wasted in the wifely role, her good common sense and patience always present but rarely allowed to assert itself. Carol Lynley’s petulance wears itself painfully thin very early and for the most part makes hers the most desultory role in the film. Jill St. John is more like her mother with her positive spin on things and eagerness to please both her father and her husband-to-be (contrived to be an anti-materialistic artist whose lack of interest in making money means he has no plans for how he and his soon-to-be wife will live. Nico Minardos plays him with stubborn resolve but a lack of charisma). Gary Crosby has only a few scenes to play his usual laid back hip bachelor, and Paul Henreid eases himself into the role of professor who only wants happiness for Meg and for his son. Wally Brown and Henny Backus play a couple of scheming tourists who regularly smuggle items into and out of South America, a subplot that serves as more irritant than amusement.

The film’s 2.35:1 Cinemascope aspect ratio is faithfully delivered in a widescreen transfer that’s anamorphically enhanced for widescreen televisions. The image is a tad darker than it ought to be which causes color values to often run hot and unnatural, skin tones being especially overripe. Colors are well saturated (reds sometimes bloom), and some of the shots are spectacular (and the anamorphic enhancement most welcome for a Fox Cinema Archive release), but even with the anamorphic enhancement, there is some line twitter and some aliasing in patterned dresses and tight line structures. Sharpness, however, is excellent throughout, and contrast remains at consistent levels. Black levels are deep but due to the darker color timing occasionally crush blacks. There are only momentary dust specks here and there. The movie has been divided into chapters every ten minutes so this release has 11 chapters.

The volume levels of the disc are excessive and require adjustment to prevent distortion or damage to the equipment. Even with adjustment, some of the Leigh Harline music and the choral singing of the James Van Heusen-Sammy Cahn title song sometimes seem a bit screechy in the upper registers. Dialogue has been spread across the front soundstage of this Dolby Digital 2.0 stereo sound mix. Atmospheric effects lend some believability to the Lima bullfight sequence and the nightclubs frequented by the main characters.

There are no bonus features offered with this made-on-demand disc.

With such a star-filled cast, Holiday for Lovers should have been a great deal more fun than it turned out to be. The Fox Cinema Archives disc offers better than average video and audio quality (with certain caveats), but the play’s the thing, and here, it’s sadly lacking. 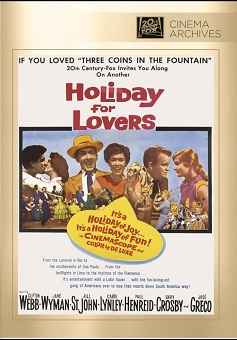