Posted on July 23, 2016 by Richard Gallagher
Beautiful Blu-ray of a fascinating drama 4.5 Stars

During the course of her life Carson McCullers wrote several provocative and evocative novels which take place in the southern United States and focus on characters that have trouble fitting into their surroundings. The Member of the Wedding is based upon her third novel, but was the first to be made into a film. It has been brought to Blu-ray by Twilight Time with a beautiful transfer courtesy of Sony.

But I’m just 12. When I think of all the growing years ahead of me, I get scared. – Frances “Frankie” Addams

During the course of her life Carson McCullers wrote several provocative and evocative novels which take place in the southern United States and focus on characters that have trouble fitting into their surroundings. The Member of the Wedding is based upon her third novel, but was the first to be made into a film. It has been brought to Blu-ray by Twilight Time with a beautiful transfer courtesy of Sony.

Frances “Frankie” Addams (Julie Harris) is a 12-year old tomboy with short, unkempt hair living in an unnamed town in Georgia. Her mother is dead and her father, a watchmaker, pays little attention to her. The significant adult in her life is Berenice (Ethel Waters), the family’s black cook and maid, who cares for Frankie during the day. Her only real friend is her young cousin, John Henry (Brandon de Wilde), who lives next door but spends most of his days with Frankie and Berenice.

Frankie is very bright and precocious, but she feels alienated because she doesn’t belong to anything or anyone. The one thing which has brightened her outlook is the impending wedding of her brother Jarvis (Arthur Franz), a soldier in the Army, and Janice (Nancy Gates). Frankie is envious of some girls in the neighborhood who have formed a club. She longs to be voted into their group, but the girls are older and wear dresses or nice blouses and slacks; Frankie, on the other hand, looks like a ragamuffin with dirty elbows. When the girls select a new, more refined neighbor for the club, Frankie decides that she wants to get away. She starts to call herself “F. Jasmine Addams” and convinces herself that she will go off with Jarvis and Janice on their honeymoon.

The Member of the Wedding was first adapted by Carson McCullers into a Broadway play, where it ran for 501 performances. The rights to make it into a film were purchased by Stanley Kramer, who hired Fred Zinnemann to direct. Julie Harris, Ethel Waters, and the young Brandon de Wilde were signed to reprise their Broadway roles. The first half of the film has a somewhat stagey feel to it, with most of the action taking place in the Addams family’s kitchen, but it becomes more cinematic in the second half. Harris was 27 years old when she made this, her film debut, but I had no difficulty believing her as a 12-year-old. Frankie is more loquacious and erudite than most pre-teens, an attribute which was a bit jarring at first, but Harris turns in a bravura performance which earned her an Academy Award nomination. Ethel Waters is excellent as the loving maid who struggles to understand what is troubling Frankie. Brandon de Wilde, whose acting career was cut short by a fatal auto accident at the age of 30, is fine as the young lad who is mostly unperturbed by Frankie’s antics.

The screenplay by Edward and Edna Anhalt is adapted from the play, which differs in some respects from the novel. Fred Zinnemann, who had recently directed High Noon for Stanley Kramer, successfully achieves the sometimes difficult job of turning a Broadway drama into a compelling film. Although The Member of the Wedding is, on one level, a coming of age story, it also deftly explores race relations, sexual identity, and the callous ways in which outsiders can be treated.

The 1.33:1 black & white image is gorgeous, as befits a Blu-ray from Sony. The outstanding cinematography is by Hal Mohr (The Wild One, Rancho Notorious). The 1080p image utilizes the AVC codec. A natural grain structure has been retained and, as our resident expert Robert A. Harris points out, the image “shimmers.”

The English 1.0 DTS HD-MA audio is excellent, with no distortion or other age-related anomalies to interfere with your viewing pleasure. Every word of dialogue is clear and understandable, and English SDH subtitles are available.

The Member of the Wedding boasts a superb score by Alex North (Spartacus, Cleopatra) which is reproduced with exceptional fidelity.

The extras on this Blu-ray include two commentary tracks. One has remarks by singer-songwriter Suzanne Vega, as well as film historians Derek Botelho and David Del Valle. The other is by Carson McCullers biographer Virginia Spencer Carr.

Ms. Carr also appears in the featurette “The World of Carson McCullers,” a fascinating look at the author’s often troubled life. “The Journey from Stage to Film” explores the process of adapting the stage play to a feature film, and it notes the somewhat unusual but critical decision to cast the three principal actors from the Broadway show in the film.

There is an optional introduction to the film by the late Stanley Kramer’s wife, as well as the film’s theatrical trailer. Also included is the isolated score track.

Finally, the enclosed eight-page illustrated booklet contains an informative and entertaining essay by Julie Kirgo, as well as several still photographs from the film.

The Member of the Wedding may not be as well-known as two other films made from Carson McCullers novels, The Heart is a Lonely Hunter and Reflections in a Golden Eye, but it holds its own with those films and is highly recommended.

Readers who are interested in purchasing it should go to the Screen Archives website or the Twilight Time website to verify that copies are still available. This Blu-ray has been issued in a limited edition of 3,000 units. 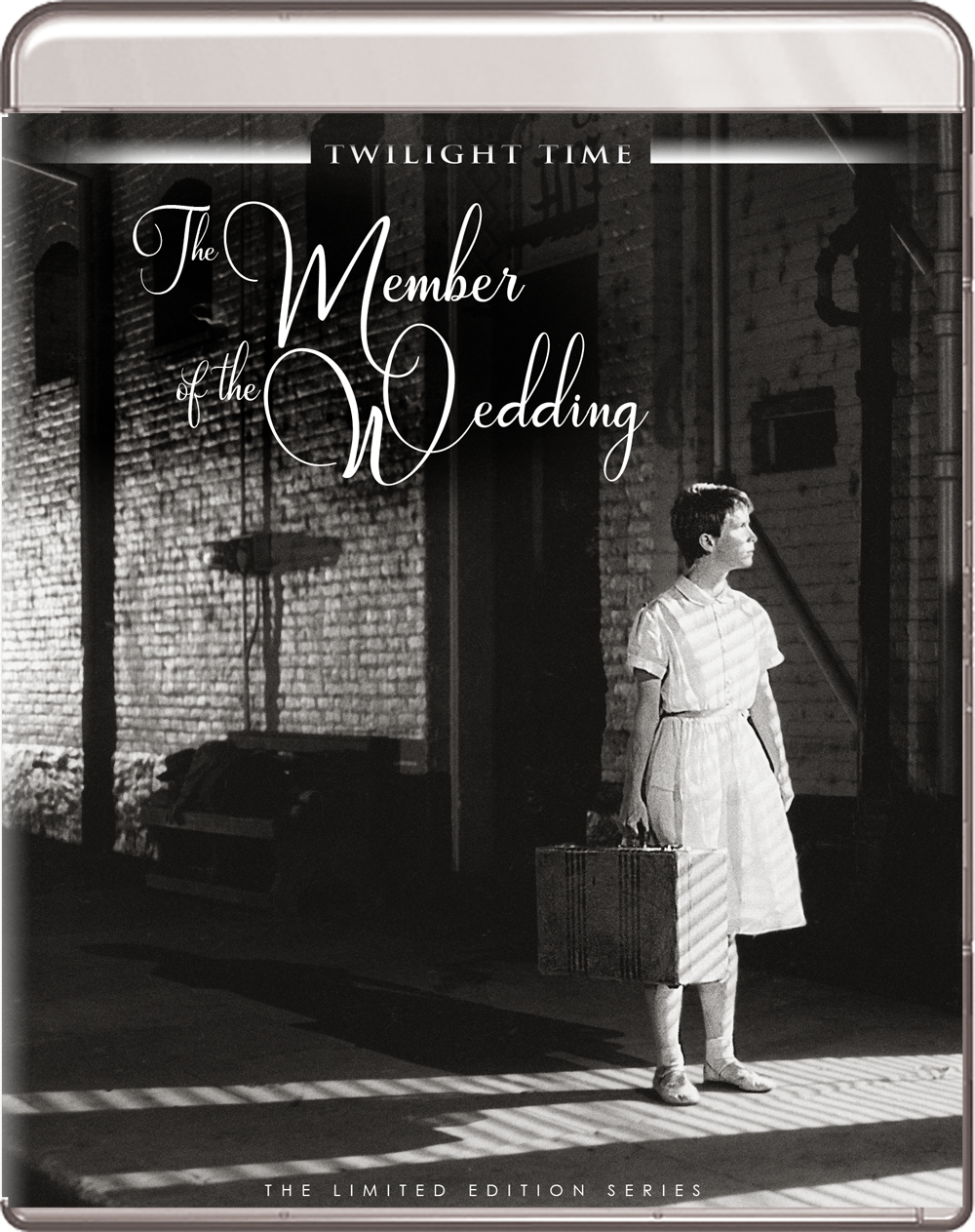